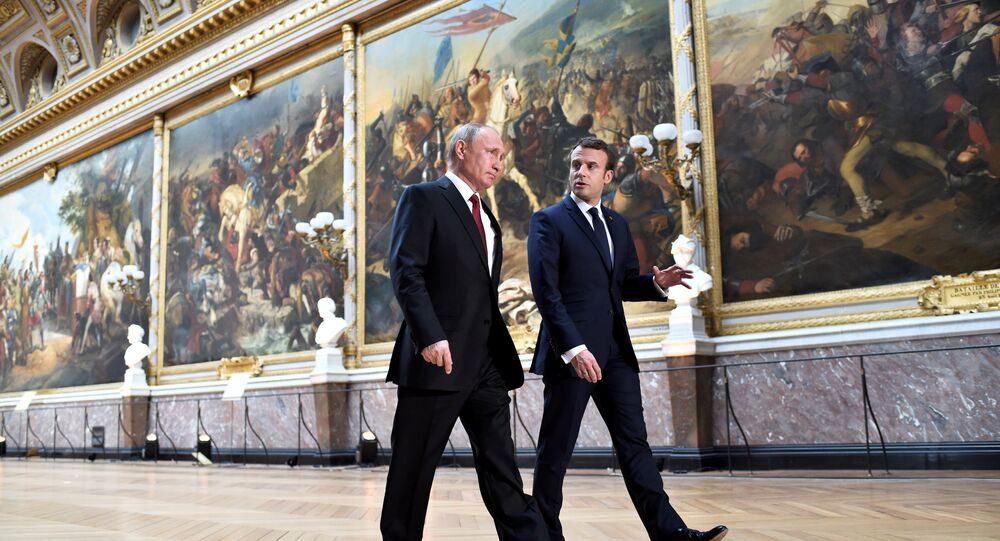 Twitter users are trying to outshine each other as they mock French President Emmanuel Macron over his reported remark that he is "an equal" to his Russian counterpart, Vladimir Putin.

On Sunday, Macron was interviewed on the results of his first year in office by RMC radio host Jean-Jacques Bourdin and Edwy Plenel of the website Mediapart.

After the interview, Macron reportedly drew a parallel between himself and Putin as he shared a drink with the journalists. According to Bourdin, the French president said he was "an equal to Putin" while commenting on his and France's position on the situation in Syria.

As the news popped up, Twitter trolls immediately launched a mockery competition.

Macron needs DETOX and/or THERAPEUTIC INTERVENTION! He might want to be Mr. Putin… WHEN HE GROWS-UP… but he doesn't come within LIGHT-YEARS of the Russian Federation President, now!

"By the way, Putin understands me. And I decided to strike Syria in order to convey to Putin that we are also part of this," the French president was quoted as saying.

I can't laugh enough at this alone. Somebody please help me.

​The journalist also said that Macron regards the April 14 missile attack on Syrian facilities as a "decision that will lead to peace in Syria." The French president said the US, France and Britain targeted "extremely precise sites of chemical weapons use" in an operation that went off "perfectly."

Obama, who is the Macron's model has spent his last years in power explaining he won against Putin. Putin never had anything to do with such comparison.
Macron suffers from the same inferiority complex… quite worryinghttps://t.co/TSK2D2Stvp

© Sputnik / Aleksey Nikolskyi
Macron Says He Told Putin Russia "Complicit" in Alleged Syrian Chemical Weapons' Use
Last week, the US, France and the UK launched over 100 missiles at a number of targets in Syria in response to the alleged chemical attack in Eastern Ghouta's Douma. The Syrian government has denied the accusations of chemical weapons use and said that the Jaysh al-Islam terror group staged the "attack" to justify potential foreign intervention in Syria.

Putin and Macron are expected to meet during the St. Petersburg International Economic Forum (SPIEF) in May. Perhaps then we'll find out who's the bigger man?