Facebook Must Face Court for Facial Recognition – US Judge

Facebook is facing escalating legal and government pressure around the world has legal questions over its conduct going back almost a decade are now catching up with the company.

A judge in San Francisco has ruled that class-action lawsuit against tech-giant Facebook can proceed in the US state of Illinois in response to allegations that the site has been using facial recognition technology to identify users online without their knowledge or consent.

The legal victory for the plaintiffs comes seven years after the original application was made in 2011 over claims that the company was operating algorithms on users facial information in order to "suggest tags" when new photos are uploaded.

Rejecting arguments that the location of @facebook’s servers shields it from liability, U.S. District Judge James Donato certified a class of Facebook users in Illinois who had their facial data analyzed and collected by Facebook after June 7, 2011. https://t.co/qDUJG6Msif

Facebook has denied the allegations and said it will vigorously oppose the suit, which it maintains is without foundation. 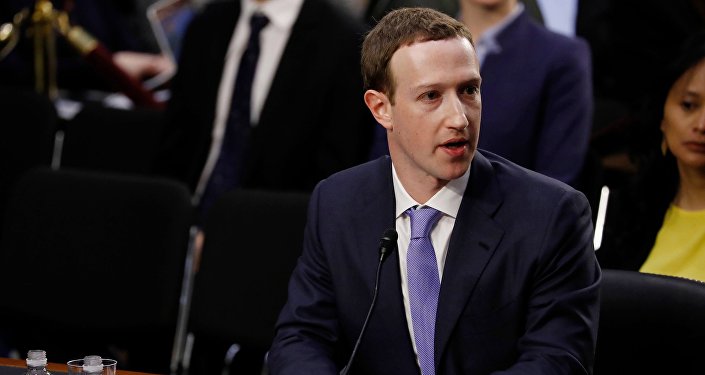 © REUTERS / Aaron P. Bernstein
Mark Cyborgberg? Zuckerberg's Congressional Hearing Blows Up Twitter (PHOTOS)
Just days prior Facebook's founder and CEO Mark Zuckerberg faced a ten-hour grilling before US Senators who sought to establish what he knew about the company's handling of the Cambridge Analytica scandal and what measures it would take to better secure its users' data.

In yet another potentially damaging revelation for the online data giant, a former director at Cambridge Analytica, Brittney Kaiser submitted in her evidence to the UK Government's inquiry into the data mining scandal that likely far more than 87 million users' accounts and their data have been compromised.

Brittany Kaiser, Cambridge Analytical whistleblower: "I believe it is almost certain that the number of Facebook users whose data was compromised through routes similar to that used by Kogan is much greater than 87 million." Suggests other Facebook quizzes used to acquire data.

The European Union's digital chief is also slated to meet with the embattled CEO amid increasing criticisms from activists in Europe that the company is engaging in manipulative and deceitful conduct in order to impose facial surveillance on European users.