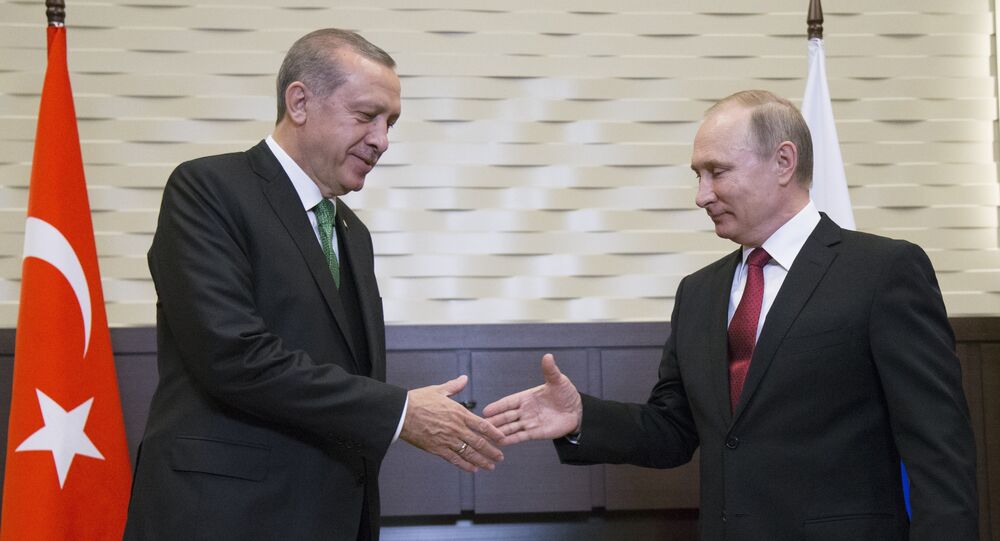 MOSCOW (Sputnik) - Russian President Vladimir Putin and his Turkish counterpart Recep Tayyip Erdogan held a phone conversation on Saturday, during which they discussed missile strikes of the United States and its allies on Syria and agreed to intensify bilateral cooperation aimed at political settlement of the Syrian crisis.

"The Russian and the Turkish sides proceed from the fact that in the light of what has happened it is necessary to intensify bilateral cooperation aimed at real progress in the process of a political settlement in Syria," the Kremlin press statement says.

© AP Photo
Erdogan on West's Strike: Assad Got Message "Massacres Wouldn't be Left Unanswered"
During the conversation, the parties discussed the tensions around Syria, which escalated as a result of the missile strikes conducted by the United States and its allies, it added.

"The Russian president stressed that the actions of a group of Western countries grossly violate the UN Charter and the fundamental norms and principles of international law," Kremlin said.

On Friday night, the United States, France, and the United Kingdom launched strikes on a number of targets in Syria in response to the alleged chemical incident in the Damascus' suburb of Duma. According to the Russian Defense Ministry, the three countries fired over 100 cruise and air-to-surface missiles, most of which were shot down by Syrian air defense. Putin described the attacks as an act of aggression against a sovereign state, noting that neither Russian military experts nor local residents confirmed the fact of a chemical attack, which became a pretext for strikes.

Erdogan Lashes Out at France Over Allegedly 'Hosting Terrorists' at Elysee