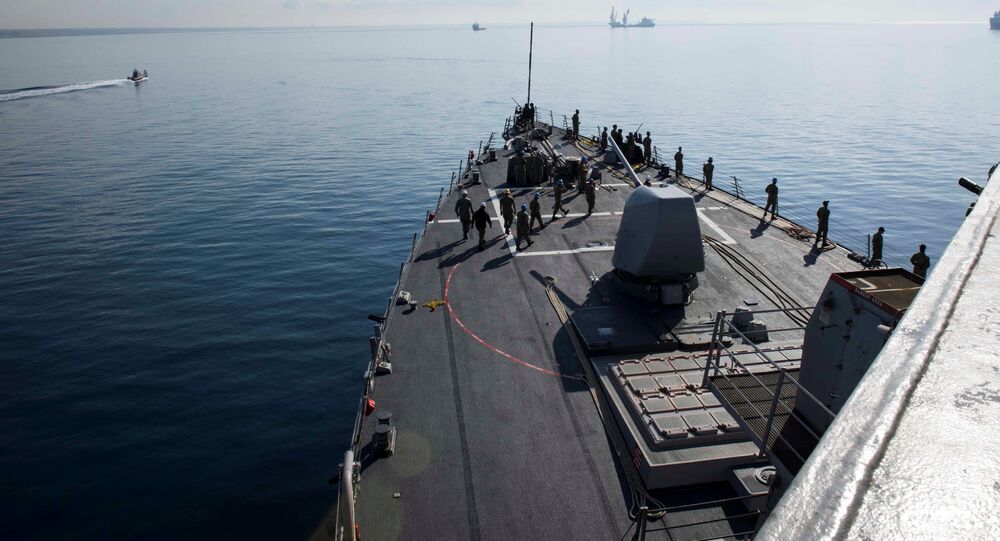 US President Donald Trump's pledge to fire "smart" missiles on Syria apparently indicates that a ghost of last year's missile strike on the Arab country is already in the air.

On Wednesday, US President Donald Trump threatened a direct strike on Syrian government forces, following an alleged chemical attack in the city of Douma, in a tweet that was followed by another one in which Trump claimed that Washington's relations with Moscow were worse than during the Cold War.

Russian Foreign Ministry spokeswoman Maria Zakharova was quick to respond to Trump's remarks by saying that "smart missiles must strike terrorists, not the legitimate government that has been fighting international terrorism on its territory for several years."

She dubbed any strike as a possible attempt to cover up the evidence proving that there had been no chemical attack in Douma. Addressing Trump's call to stop what he described as an "arms race," Zakharova noted that it was a "great idea," and suggested starting "with US chemical weapons."

In a reference to Trump's latest tweets, the Russian President's spokesman Dmitry Peskov, for his part, underscored that Moscow does not "participate in Twitter diplomacy."

"We support serious approaches. We continue to believe that it is important not to take steps that could harm an already fragile situation," Peskov stressed.

'All options on the Table'

In another development on Wednesday, White House Press Secretary Sarah Huckabee Sanders said at a press briefing that Washington has not laid out a timetable for possible strikes on Syria yet.

"We have a number of options and all of those options are still on the table. Final decisions haven't been made yet on that front," Sanders said.

She added that President Trump believes that the Russian and Syrian authorities should be held accountable for an alleged chemical attack in the town of Douma.

READ MORE: Syrian MP: Why Didn’t US Use Its 'Smart Missiles' Against Terrorists in Syria?

"The president holds Russia and Syria responsible for this chemical weapons attack," Sanders said, adding that the intelligence reports provided to the US do not support Russia's assertion that the attack was staged by the so-called White Helmets.

She was echoed by US Defense Secretary James Mattis who said on Wednesday that Washington along with its allies were "still assessing" reports of an alleged chemical weapons attack in Douma and that they are considering options for retaliation.

"We're still assessing the intelligence, ourselves and our allies. We're still working on this," he noted.

When asked about a possible US missile strike on Syria earlier this week, Mattis said that he does not "rule out anything right now."

Meanwhile, the Daily Telegraph has claimed that British submarines have been ordered to move within missile range of Syria amid reports about an imminent US strike on President Bashar Assad's forces.

The newspaper reported that the order was issued by UK Prime Minister Theresa May and that she has called on her ministers to meet for an emergency cabinet meeting to discuss how Britain will respond to an alleged chemical weapons attack on Douma.

Earlier, the BBC cited sources familiar with the situation as saying that May "looks ready" to join military actions in Syria currently being considered by the US and coalition forces without the approval of the British parliament.

A spokesperson for May has stated, in turn, that Cabinet members will meet later on Thursday to discuss the situation.

In a separate development, Reuters cited US officials as saying that the Syrian military has re-positioned some air assets in response to Trump's threats to possibly ramp up military activity against Damascus.

At the same time, the officials failed to comment on whether the Syrian military's moves would affect the Pentagon's plans.  Damascus, in turn, has not made any official statement on its military reshuffle.

On April 7, Syrian opposition media outlets claimed that the country's government forces had used chemical weapons against civilians in the city of Douma in Eastern Ghouta.

The allegations were followed by the White Helmets posting unverified footage of the aftermath of the alleged chemical weapons attack and claiming that up to 70 people had died of "widespread suffocation."

Washington and its allies accused Damascus of staging the attack, adding that the Syrian authorities' "history" of using chemical weapons was "not in dispute."

Russian Foreign Minister Sergei Lavrov, for his part, said that the Russian military had repeatedly warned of a "provocation" being prepared in Eastern Ghouta. The goal is to accuse Damascus of the alleged use of chemical weapons against civilians.

© AFP 2020 / STR
US Using 'Fabrications and Lies' as Excuse to Target Syria - Damascus
The Russian Defense Ministry has, meanwhile, reported that an analysis of the soil in Douma taken immediately after the alleged chemical weapons attack has revealed the absence of nerve agents and chlorine-containing poisonous substances in the area.

On April 7, 2017, the US launched 59 Tomahawk cruise missiles at the Syrian military airfield in Ash Sha'irat. Trump described the attack as a response to the alleged chemical weapon use in Syria's Idlib province on April 4, which killed more than 80 people. Washington blamed the incident on the Syrian government which denied the allegations.