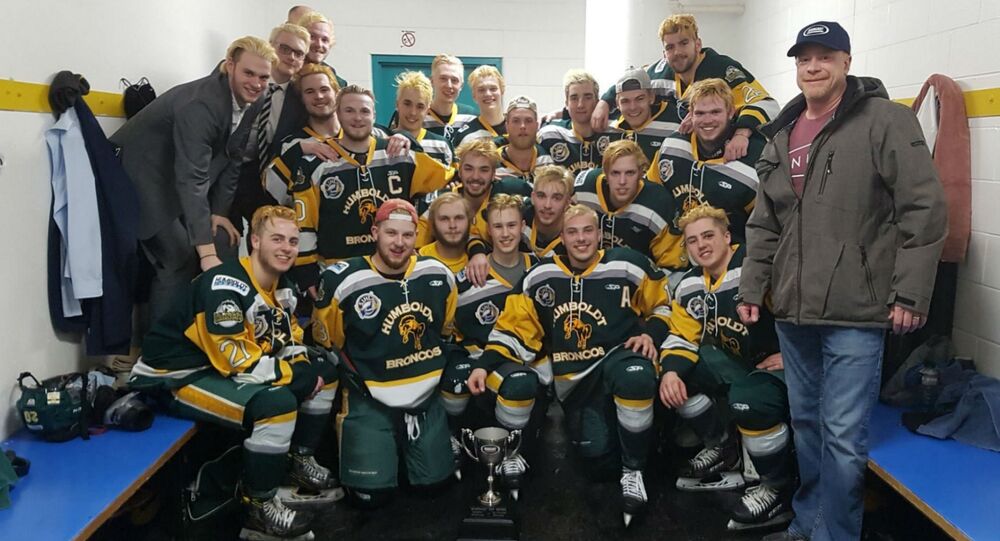 According to police, there were a total of 28 people in the bus. A probe into the accident is underway.

At least 14 people have died in a crash, involving a bus, carrying a youth hockey team, in central Canada, Globe and Mail reported, citing law enforcers.

According to police, out of 28 bus passengers, 14 have been injured, while 3 of them are in a critical condition.

The deadly crash of the bus, carrying Humboldt Broncos players, that collided with a truck on a rural highway in Saskatchewan took place late on Friday. An investigation is underway in order to establish the reasons and circumstances of the accident.

This picture was just sent to us by a witness at the Humboldt Broncos crash. STARS dispatched, RCMP on scene. #sask #SJHL pic.twitter.com/vp4jbC8pUz

Following the news, Twitter users have been expessing condolences to the families of the victims, using the hashtag #PrayersForHumboldt.

Canadian Prime Minister Trudeau has expressed deep condolences, saying, "I cannot imagine what these parents are going through and my heart foes out to everyone affected by this terrible tragedy, in the Humbolt community and beyond."

Thoughts and prayers to the @HumboldtBroncos players, families, and everyone involved back home in Sask. The hockey community is with you. #prayforhumboldt pic.twitter.com/r24NeRVAtz

Thoughts and prayers to all the players and families of the Humboldt Broncos. #PrayersForHumboldt 🙏🏼

My uncle loved people and loved his family. His loss will affect so many. Until I see you again, Uncle Darcy💔 forever Humboldt Broncos head coach.

There are no words right now. My family and I are praying for all those affected by the Humboldt Broncos tragedy.

I road the bus all the time playing in the @TheWHL very unfortunate to hear about this tragic accident. Thoughts and prayers to everyone effected involving the #Humboldtbroncos #PrayersForHumboldt