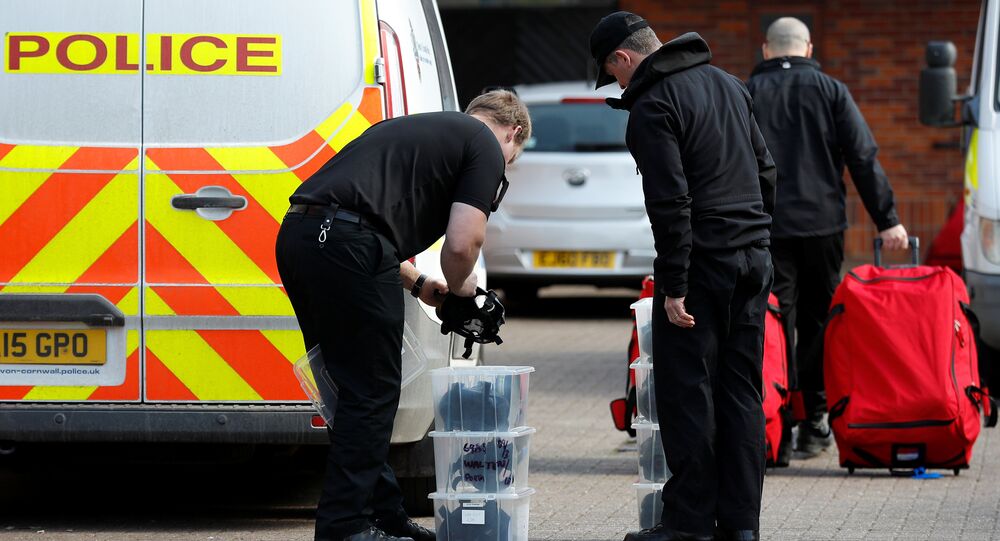 Anton Utkin, a former UN chemical weapons inspector in Iraq, told Sputnik that the decisions by the UK with regard to the poisoning of former Russian spy Sergei Skripal demonstrate that London isn’t truly committed to getting to the bottom of the case.

According to the chemical weapons expert, right now London is "sitting an examination" on the sincerity of its objective quest for the truth in the attack on Skripal and his daughter Yulia, who were found unconscious at a shopping center on March 4, which the UK promptly accused Russia of orchestrating.

"London's disinclination to provide any information on the case, its unwillingness to cooperate and reluctance to openly investigate the matter so that everybody understands their moves and what is going on, indicates that the exam hasn't been passed," Utkin told Sputnik.

© REUTERS / Hannah McKay
Moscow: UK Justification for Refusal to Grant Skripal's Niece Visa "Doesn't Hold Water"
As for the accusations by UK Foreign Secretary Boris Johnson that Moscow tried to undermine the independent inquiry of the Organization for the Prohibition of Chemical Weapons (OPCW) by proposing a joint UK-Russia investigation into the matter at the emergency session of the OPCW Executive Council, the expert said that the joint investigation would be self-defeating for the UK.

"I'm afraid London wouldn't be able to accept the results that it would be possible to achieve within a joint investigation," he said, "They will fight it tooth and nail."

The analyst also pointed out that OPCW was invited by the UK to provide "technical assistance" rather than inspection.

"And taking into account that it is a technical assistance, in accordance with the confidentiality agreement under the OPCW concord, technically the results of the analysis shouldn't be made public," he explained.

Ahmet Uzumcu, director-general of the OPCW, said Wednesday that the results of the sample analyses of the substance used to poison Skripal and his daughter were expected to be received by early next week.

© AP Photo / Matt Dunham
Majority of Bulgarians Back Gov't Refusal to Copy West Over Skripal Case – Poll
"Once the results of the analyses of the samples are received, the secretariat will produce a report on the basis of these results and will transmit a copy of this report to the United Kingdom," he said.

According to Uzumcu, the United Kingdom has expressed its wish to be "as transparent as possible" and has already indicated its preference to disclose the report to other state parties of the OPCW. According to Utkin, it is still possible that London will change its mind, taking into account that suspicions are accumulating around the UK's accusations against Russia.

READ MORE: Skripal's Niece Alleges UK 'Must Have Something to Hide' After Being Denied Visa

He stressed that the UK has already violated a number of provisions of the OPCW convention; for instance, by failing to make efforts to settle controversial issues through the exchange of information and consultations and by issuing an ultimatum, with Peter Wilson, permanent representative of the UK to the OPCW, demanding explanations from Russia within 24 hours, while Russia was given no information on what it should explain.

"In accordance with the the Chemical Weapons Convention (CWC), the party is given 10 days to respond, but after 24 hours had passed, Russia was accused, and that was it," the expert noted.

He said that what Russia can do is abandon moves dependent on voting by the organization's Executive Council and simply continue staying within the bounds of the convention, as it has so far. On March 13, upon being faced with all the ungrounded allegations, Russia requested that the UK provide the necessary information and offered to switch to a dialogue mode, in accordance with article 9.2.

© AP Photo / Yulia Skripal/Facebook
LISTEN to COMPLETE Alleged Conversation Between Yulia Skripal and Her Cousin
"Russia offers all ways of cooperation but stumbles across unwillingness to cooperate," Utkin said, adding that the Convention allows for a number of steps to overcome this reluctance.

For example, Russia can submit a request via the Executive Council asking explanation from the UK, which would mean that without negotiating on the issue all 41 countries would demand that London provides the information. Or via a similar request Russia can demand details from all the countries that at some point produced Novichok, the nerve agent in the case. At a recent Executive Council session Russia provided information backed by evidence on a number of countries where the nerve agent could be produced.

"I believe it is becoming obvious that many countries made haste by following the UK demarche", Utkin concluded.

OPCW Carries Out Inspection in Russia