April 2 marked 36 years since Argentine troops landed on the disputed Falkland (Malvinas) Islands that had been taken over by the British Empire in 1833, drawing the United Kingdom into an armed conflict.

Hundreds of British and Argentine soldiers were killed during the months-long war waged by the UK in 1982 to reclaim the islands from troops deployed by then-Argentine leader General Leopoldo Galtieri. The conflict lasted 74 days and ended with the Argentine surrender on June 14, returning the islands to British control.

Argentina still claims the islands, which it calls the Malvinas.

Boris Martynov, head of the Department of International Relations and Foreign Policy of Russia at the Moscow State Institute of International Relations (MGIMO), told Sputnik that Argentina didn't expect the UK to fight a war of the islands and that is why it sent unprepared forces, virtually new recruits, to the islands in what was largely a political statement. Galtieri made a big mistake by counting on the United States' neutrality and expecting that the UK wouldn't send a naval squadron across the globe, Martynov said.

"The US was caught between a rock and a hard place. It had to choose between two allies, and, obviously, the US took the side of the most important and influential partner," the expert said. "At the time, the government of [British Prime Minister Margaret] Thatcher was actively deploying medium-range missiles in Europe."

He noted that, ironically, the Soviet Union came down on the side of anti-communist Argentina, and the Argentine Air Force received information from Soviet space forces in a "classic" Cold War scenario, only the sides had switched. 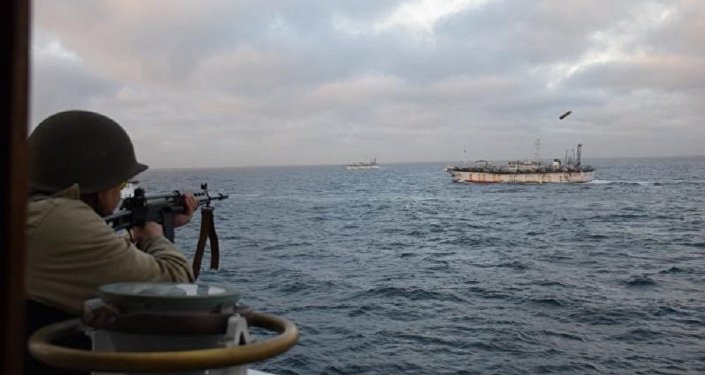 © AP Photo / Argentine Coast Guard
Argentina Fires at Chinese Vessel 'Illegally Fishing' Country's Waters (VIDEO)
Another miscalculation by Galtieri, according to Martynov, was that he jumped into a risky project without securing his rear. The Argentine fleet was also not in a position to help because Galtieri was expecting a "stab in the back" from Chile. Its dispute with Chile over the islands in the Beagle Channel wasn't settled at the time and Chile was the only country in Latin America that didn't support Argentina in its confrontation with the UK over the Malvinas. Thus, Argentina wasn't fighting the UK at full capacity.

The expert stressed that British foreign policy pinballs between "the right to self-determination and the principle of territorial integrity," adding that the contradiction still exists even in the post-Soviet era. During its conflict with Buenos Aires, London held a referendum on the islands, and the majority voted to remain a part of the UK.

"Talk about double standards: so a few thousand of the Malvinas residents have the right to decide what country they want to be part of and more that two million residents of Crimea have no such right?" Martynov questioned, referring to the 2014 vote by Crimean residents to secede from Ukraine and join the Russian Federation, which was widely panned in the West as orchestrated by Moscow.

© CC0
Hedge-Fund Founder Who Devastated Argentina Calls Bitcoin Immoral
In the early 1980s, Argentina was ruled by an unpopular military junta and the Thatcher government couldn't boast broad support before the war, so both parties needed an easy victory to win back public favor.

The expert believes that time is on Argentina's side and that the UK may eventually return the islands.

Yan Burliay, the Russian ambassador to Argentina from 1993 to 1996, also believes that sooner or later the UK will have to return the islands. He pointed out that Latin American nations agree on the fact that Argentina has the moral right to claim that the islands were forcefully occupied by Britain.

However, Evgeny Astakhov, another former Russian ambassador to Argentina, who served from 2000-2004 and is now a professor at the Department of Diplomacy at MGIMO, doubts that the dispute will be resolved in the measurable future, since the UK "only understands force."

Astakhov also noted that the US decision to support the UK in that conflict cost it dearly.

"The US has forever buried its moral and political influence," Astakhov told Sputnik. "Obviously, they still have their economic and financial domination, but they can't give orders to the region's nations anymore."