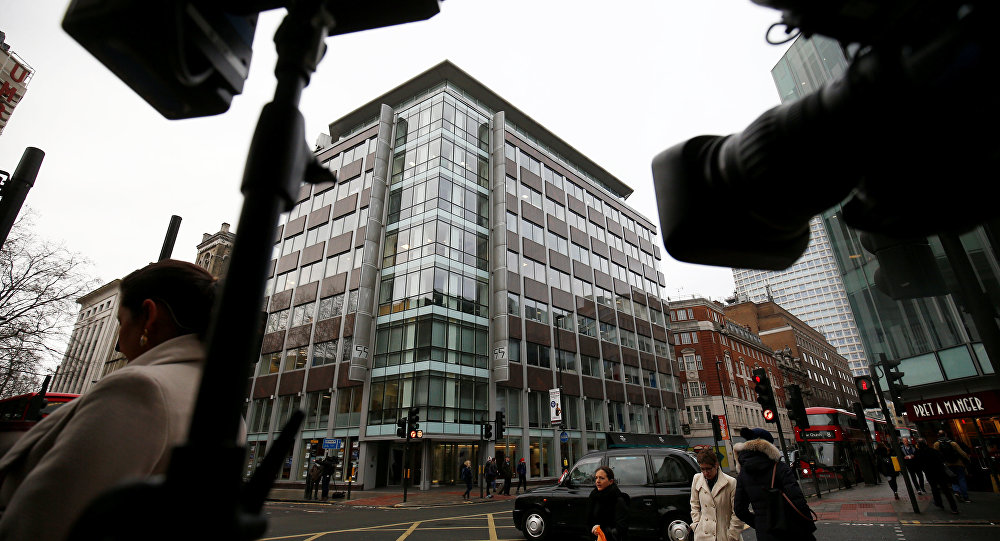 MOSCOW (Sputnik) - Alexander Nix, the chief executive of Cambridge Analytica data mining company who was suspended after exposing the company's practices in a secretly filmed video, has mentioned Donald Trump's victory in the US presidential election as one of the firm's successes.

The company, which has recently become embroiled in a personal data use scandal alongside Facebook, has helped organize political campaigns across the world.

The Board of Directors of Cambridge Analytica announced Nix's suspension on Tuesday after the Channel 4 broadcaster published its undercover investigation. The board stressed in the statement that Nix's comments seen in the broadcaster's report "do not represent the values or operations of the firm."

A Channel 4 reporter, posing as a potential client, learned from Nix about the company's political consultancy campaigns, including the 2016 US presidential election which resulted in Trump's victory.

© REUTERS / Henry Nicholls
Dirty Tricks or Black Ops? The Secret World of Cambridge Analytica
Nix described to the undercover reporter various ways of setting up compromising situations for officials that could potentially attract allegations of bribery or indecent behavior. The suspended CEO noted that the candidates were usually unaware of the tactics being employed by campaign strategists.

Cambridge Analytica has also faced public outrage over the way it collected the data that it then used to direct its campaigns.

Last week, Facebook said it had suspended the accounts of Cambridge Analytica and its affiliate SCL Group after Dr. Aleksandr Kogan, a professor at the University of Cambridge, sent these firms data from Facebook users that was harvested through an application that used Facebook Login.

The social network stressed that Kogan obtained the information, which included profile details, such as liked content, in a legitimate manner, but then breached Facebook policy when he passed this data to a third party.

© Sputnik / Natalia Seliverstova
Facebook Security Chief to Leave Company Over Disclosure Disputes
The apparent vulnerability of Facebook raised concerns in the UK Parliament. The Digital, Culture, Media and Sport Committee accused Facebook CEO Mark Zuckerberg of having misled the Parliament during previous inquiries and summoned him to appear before the committee. According to the parliament members, Facebook understated the threats linked to third-party companies obtaining the social network's data.

The committee urged Zuckerberg to respond by March 26.

Kogan told the BBC broadcaster that he was being used as a "scapegoat" by Facebook and Cambridge Analytica. The academic added that he had no idea the information his app collected would be used to help Trump.

Nix said that Cambridge Analytica did all the research for Trump's campaign, managed his digital and television strategies, and used their data to choose the appropriate course of action.

© AP Photo / Manish Swarup
‘Beast’ Facebook Spreading Race Hatred - UN Investigator
The firm has been part of ongoing probes into the alleged ties between Trump's campaign team and Moscow. Robert Mueller, who is leading the Special Counsel investigation, has asked the company to submit the emails of all of its employees who worked with the Trump campaign.

Nix described how easy it was to field the questions of the US House intelligence committee, which is conducting its own probe into the purported Moscow connection.

The Russian officials have repeatedly stressed that Moscow does not interfere in other states' internal affairs, calling allegations of all such meddling groundless.

The Channel 4 investigation revealed the scope of the company's activities. According to it, Cambridge Analytica has worked across the globe and claimed to have been instrumental in Ukraine's Orange Revolution, a series of protests that followed the 2004 presidential election. The company was involved in the Italian and Czech elections as well.

Its reach has spread much further than Europe. In Kenya, the data company helped Uhuru Kenyatta secure the presidency in 2013 and 2017, according to the investigation. It has also operated in India and Malaysia.