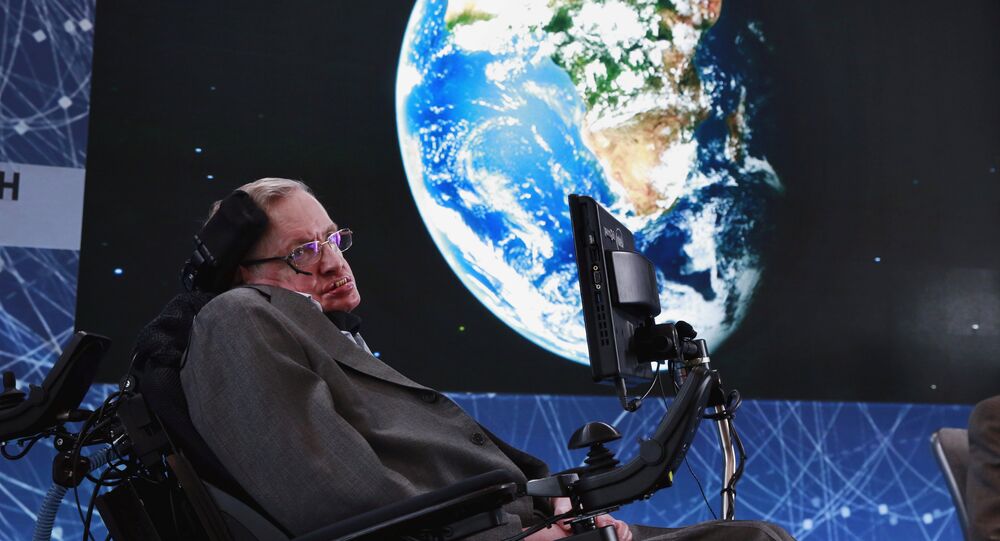 Globally-renown physicist Stephen Hawking passed away, leaving a breakthrough legacy behind. One of the greatest minds of our time, he taught people a lot about both space and humanity. Sputnik has collected pearls of his wisdom.

Stephen Hawking, a theoretical physicist and educator, cosmologist, and Director of Research at the Centre for Theoretical Cosmology at the University of Cambridge and author of 'A Brief History of Time' died at age 76 in England.

Despite doctors predicting, when he was in his twenties, that he would soon die of a neurological disease, he managed to survive another half-century. During those years, he provided revelations about the history of the universe and our planet, while serving as an example of human strength and willpower.

His image, of a scientist in a wheel chair with a computer-generated voice, has become iconic  since the publication of A Brief History of Time: From the Big Bang to Black Holes, his best-selling book. There he explained, in layman's terms, the structure, origin, development and eventual fate of the universe.

The loss is mourned across the world.

Remembering Stephen Hawking, a renowned physicist and ambassador of science. His theories unlocked a universe of possibilities that we & the world are exploring. May you keep flying like superman in microgravity, as you said to astronauts on @Space_Station in 2014 pic.twitter.com/FeR4fd2zZ5

there’s a big black hole in my heart hours before Pi day. Rest In Peace @Steven_Hawking… See you in the next ❤️

RIP Professor Stephen Hawking, 76.
The world’s most brilliant man, and someone who never stopped wondering ‘Why?’
This hangs on the wall outside his office at Cambridge University.
It says it all.
What a life, what a genius. pic.twitter.com/jDWXqoxCqV

Professor Stephen Hawking was a brilliant and extraordinary mind — one of the great scientists of his generation. His courage, humour and determination to get the most from life was an inspiration. His legacy will not be forgotten.

​He never stopped working —just several days before passing away, in an exclusive interview with the National Geographic's StarTalk, he gave his thoughts on the birth of the universe.

Claiming that nothing existed "before the big Big Bang", Hawking referred to Albert Einstein's general theory of relativity, which he said stipulates that "space and time together form a space-time continuum or manifold which is not flat, but curved by the matter and energy in it." However, he pointed out that he sticks to "a Euclidean approach" when it comes to explaining the origin of the universe.

Despite captivating millions with his perception of theoretical physics, he maintained a keen interest  in the here and now, keeping an eye on what has stirred the minds of humankind.

In 2016, with the help of Professor Stephen Hawking, Cambridge University opened its first dedicated Artificial Intelligence (AI) center. He told guests AI will 'transform' society or 'destroy' it, and offered his predictions on the matter.

"The potential benefits of creating intelligence are huge… With the tools of this new technological revolution, we will be able to undo some of the damage done to the natural world by the last one — industrialization. And surely we will aim to finally eradicate disease and poverty. Every aspect of our lives will be transformed. In short, success in creating AI could be the biggest event in the history of our civilization."

However, as a true scientific mind, he captured the whole picture, identifying possible threats.” I fear that AI may replace humans altogether," Stephen Hawking said in an interview with Wired magazine.

The scientist explained that people who specialize in computer viruses may one day come up with a computer program which would be able to function on its own, without human assistance. It would "improve and replicate itself" until it becomes AI, a "new form of life that outperforms humans."

Search for Life Across the Universe

He also helped launch a new attempt to find intelligent alien life through new, breakthrough initiatives,  worth $100 million in 2015, although he repeatedly expressed concerns that advanced creatures from outer space may want to destroy human civilization.

Human history is rife with instances of people abusing, even annihilating other cultures that were less technologically developed. With that in mind, we shouldn't expect aliens to be any nicer to us than we've been to one another, Hawking said then.

The prominent cosmologist repeatedly made predictions of the impending destruction of the world due to climate change, overdue asteroid strikes, epidemics and population growth. Last year he called on mankind to redouble its efforts to colonize other worlds, believing the Earth will become uninhabitable within the next 100 years.

"I strongly believe we should start seeking alternative planets for possible habitation. We are running out of space on earth and we need to break through technological limitations preventing us from living elsewhere in the universe. I am not alone in this view," he said.

The scientist didn’t stay away from major political events and social trends. For example, he called the Brexit referendum and the election of Donald Trump as US president "a cry of anger by people who felt they had been abandoned by their leaders." In his article for The Guardian, he argued that these were both examples of politicians failing the people in the face of globalization, massive technological advances and growing inequality.

"This in turn will accelerate already-widening economic inequality around the world. The Internet and the platforms that it makes possible allow very small groups of individuals to make enormous profits while employing very few people. This is inevitable, it is progress, but it is also socially destructive," Hawking said.

Not only did he express concerns over Trump's policy and appointment of avowed climate change doubter Scott Pruitt as the head of the US Environmental Protection Agency, he worried that Trump's America would be hostile.

"I would like to visit again and to talk to other scientists, but I fear that I may not be welcome," Hawking said.

Not Alienated by Something Human

Not only Hawking’s discoveries, but also his sense of humor is widely known. He’s left lots of ironic remarks.  Here’s an example of his sharp view on the events from the opening of the Leverhulme Centre for the Future of Intelligence (LCFI) at Cambridge University.

"We spend a great deal of time studying history, which, let's face it, is mostly the history of stupidity. So it's a welcome change that people are studying instead the future of intelligence," Hawking told the audience.