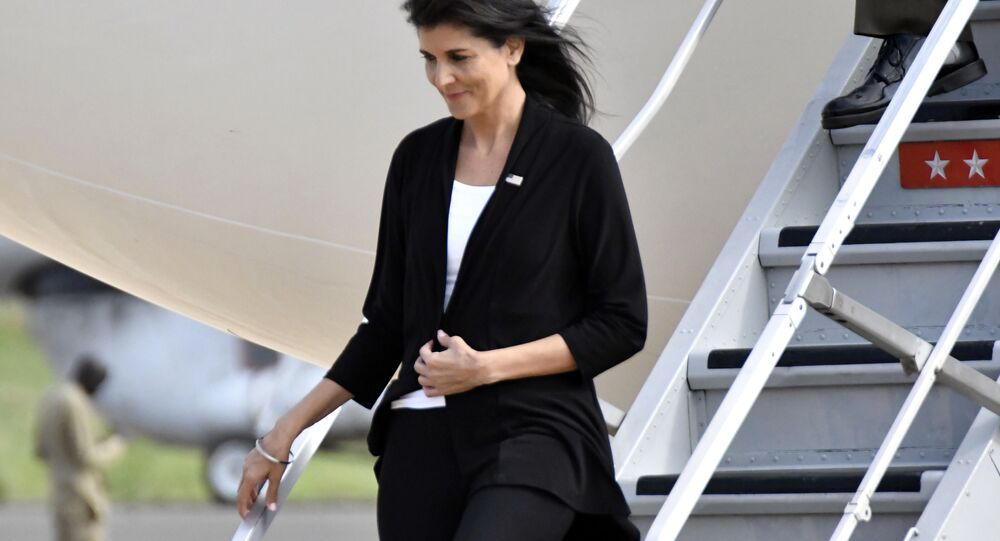 Israeli Prime Minister Benjamin Netanyahu on Thursday opened an exhibition at the United Nations devoted to the holy city "three thousand years of history: the Jews in Jerusalem" and spoke with reporters.

Netanyahu stated that during the last few days of his visit to the US he met with President Donald Trump, leaders of the Senate, Congress, business leaders, and also with the US ambassador to the UN.

During his speech, Netanyahu praised the support of Nikki Haley, which, he explained, she provides to Israel in the international organization.

"We call her 'hurricane Haley.' She does a wonderful job for the sake of truth and to protect Israel in the UN," the Israeli prime minister stated.

After taking the post of US ambassador to the United Nations in January 2017, Haley has repeatedly declared that the new US administration will not allow the ill-treatment of Israel.

An excellent meeting with Nikki Haley, the US ambassador to the United Nations. Thank you for defending Israel and defending the truth! pic.twitter.com/rdFqoRRVvK

​She assured that "no one will doubt American support for Israel," accusing the UN of unfair treatment of the country.

Her criticism of UN actions echoes Israeli statements about the UN's disproportionate attention to this topic in comparison with more crucial international issues.

After US President Donald Trump's inauguration, he started to promote pro-Israeli policy in the Middle East. In December, he announced his decision to support the Israeli claim to the disputed city of Jerusalem and to recognize it as Israel's capital, subsequently moving the US Embassy there, which is currently located in Tel Aviv. The step has prompted criticism from a number of states, first and foremost from those in the Middle East and Palestine and triggered a wave of protests in the region.

For decades, Israel has been in conflict with the Palestinians, who have been seeking diplomatic recognition for the independence of their state on the territories of the West Bank, including East Jerusalem, which is partially occupied by Israel, and the Gaza Strip.