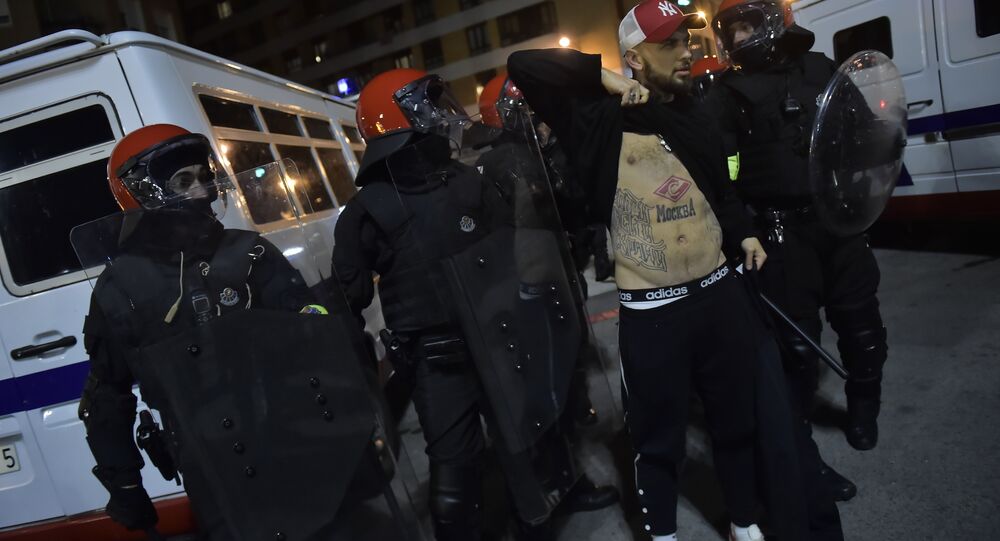 Clashes between fans of the Russian soccer club Spartak and Spain’s Athletic Bilbao ahead of the match in the UEFA Europa League received extensive media coverage, with Spanish outlets fueling tensions well in advance, “warning” Bilbao residents they should beware of Russian “neo-Nazis.”

A police officer died Thursday from a heart attack during the unrest outside the San Mames stadium in the northern Spanish city of Bilbao, where Spartak Moskva faced off against Athletic Bilbao.

Witnesses of the clashes told Sputnik they believe a wave of publications cautioning locals about threats allegedly posed by the Russian "Neo-nazis" in Bilbao largely contributed to fueling aggression prior to the game.

For instance, sports daily Marca claimed "there are radical groups among Russian soccer fans and some of the members had previously participated in violent clashes in other European cities."

El Correo, one of the most popular newspapers in Basque Country, also referred to Spartak fans as "radicals." It stressed, however, that not all fans arriving from Russia were members of such "ultra" groups.

© AFP 2020 / JAVIER SORIANO
Spanish Policeman Dies During Clashes With Football Club Fans - Reports
El Mundo warned its readers on February 20 that "Spartak's ultras are known across the continent for their cruelty during the Russian team's away matches. This season they caused major unrest in Seville, where they even attacked elderly people, and then in Slovenian city of Maribor."

La Vanguardia in its turn characterized Russian fans as "extremely violent, intolerable of other nationalities, ultra-right martial artists." According to the publication, Spartak fans are "trained almost like members of militant groups."

Alexander Vishnevsky, a sports journalist residing in Spain, told Sputnik the fountain of articles in local media about "allegedly radical, allegedly ultra-fascist fans arriving to beat up people and run riots" had disseminated panic among residents, even those not interested in sports.

"On numerous occasions, when I would go somewhere with a group of people and they would hear someone speaking the Russian language, they would stare at you with mad eyes and try to hide somewhere," he said, adding that although the reports about the "inadequate" behavior of the Russians were completely unfounded, the media propaganda "took effect."

"Although there was no threat, you could sense the expectation of danger in the air," Vishnevsky noted.

The journalist acknowledged that in any country, some of fans could be neo-Nazis, but people who arrived in Bilbao were mostly "friendly fans, families, people who just wanted to have a good time — go to a museum, enjoy the beauty of the Basque Country, watch a soccer match."

Pablo González, a journalist and an Athletic Bilbao fan, believes that some media are "trying to avoid taking on responsibility" by blaming everything on Russian fans, while other outlets are genuinely trying to bring home to people "what the facts on the ground are."

"Certain media inflamed tension and we've all seen what happened between the fans," he said, adding that the best decision in a situation like this is to study surveillance cameras as "they will show what really happened…[Media] can lie and exaggerate for only so long."

The journalist suggested that Spanish media are using the incidents between groups of radical fans to malign Russia ahead of the 2018 World Cup, even though it was not the Russians who started these clashes. He noted that the situation has little to do with the actual state of things in Russia: the problem with "hooligans" there is not much different from that in Spain.

© REUTERS / Andrew Boyers/Action Images
After 9 Years, Messi Finally Scores Against Chelsea, Shakes Twitterland
González told Sputnik that he went to Athletic's match in Moscow and that not only did he suffer no aggressive attitude from Russian fans, he "felt welcome." As for what happened in Bilbao, he said that Spartak fans walked the streets without incident until they reached the stadium, where a small group of Athletic fans started throwing bottles and glasses at them.

"Locals started the conflicts and the guests added fuel to the fire," he said.

Russian fan of Spartak Andrey Koleda, who also saw the game, told Sputnik that what he sees is Spanish media hurrying to conclude that "these events will have an effect on the World Cup in Russia. They say after what happened involving ‘Russian animals' in Bilbao, the World Cup 2018 will be seen as dangerous."

"This is pure exaggeration against Russia and the Russian people, but they have long been talking about it," he concluded, adding that after the game he and other fans had to wait in the stadium because police said they couldn't guarantee their security. "That would never happen in Russia… Police are always minimizing risks before and after the game."

However, even the police didn't completely deter the egged-on fans. Pedro Mouriño, a Spanish entrepreneur, CEO of consulting firm Iberatlantic Global Corporation and a soccer fan, told Sputnik he also heard that a group of Athletic fans attacked Spartak fans even though they were being escorted by police.

"It wasn't aggression on the part of Russian fans, it was a confrontation between radical groups on both sides. This is what we should fight with altogether — radicalism… Authorities should make lists of radical fans to make sure these people can't get visas and travel abroad to see away games."

"It was obvious that there would be provocations. And that's what happened — when you are attacked, you fight back," Izmailov explained.

He emphasized that the whole situation still has to be properly analyzed, but he urged people to keep in mind how the Champions League and the Europa League went in Moscow, particularly the recent game with the Athletic in Russia's capital.

"During all these events, fans enjoyed the atmosphere of hospitality, security and comfort," Izmailov concluded.