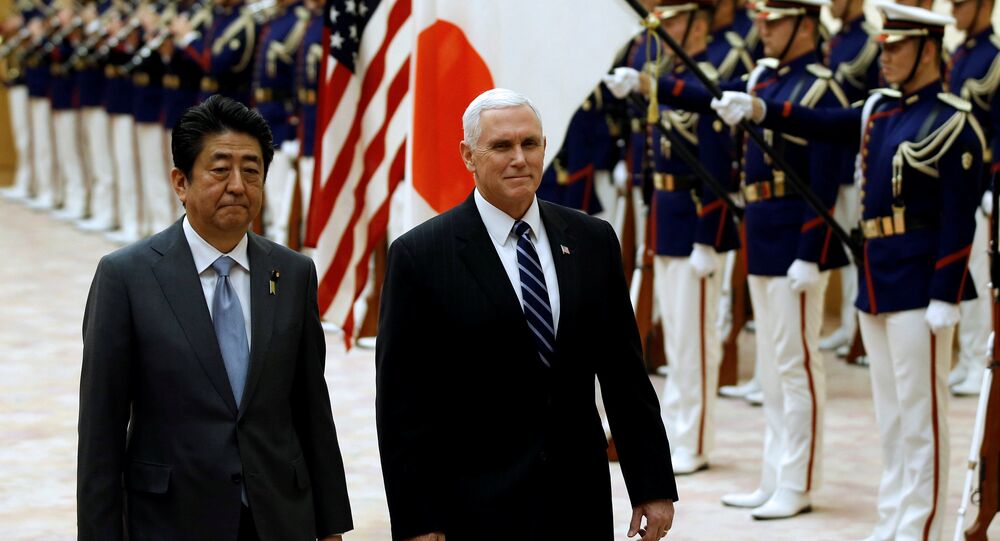 MOSCOW(Sputnik) - The United States will soon roll out its "toughest and most aggressive" round of economic sanctions to ensure the denuclearization against North Korea, US Vice President Mike Pence said Wednesday.

"We will continue to intensify our maximum pressure campaign until North Korea takes concrete steps for complete, verifiable and irreversible denuclearization. To that end, I am announcing today that the United States of America will soon unveil the toughest and most aggressive round of economic sanctions on North Korea ever," Pence told at a joint press conference with Japanese Prime Minister Shinzo Abe.

The top US official has slammed Pyongyang as the "most tyrannical and oppressive regime on the planet."

The US vice president has further stated that Washington would not let North Korea "hijack" this month's Winter Olympics with "propaganda."

"We will not allow North Korea to hide behind the Olympic banner the reality that they enslave their people and threaten the wider region," Pence said.

Pence's visit to Japan is part of his Asia trip ahead of the upcoming Pyeongchang Games that will feature North Korean and South Korean national teams participating in the opening ceremony under a joint flag, an unprecedented move, which has been a result of breakthrough talks initiated by Kim Jong-un's New Year address.

© REUTERS / Carlos Barria
Different Day, Same Song: CIA Director Claims North Korea Months Away from Being Able to Strike US
In the wake of the thaw with Pyongyang, the joint US-South Korean war games have been suspended at the request of Seoul, however, the Pentagon has continued boosting forces in the region. Most recently, the US Navy sent two guided missile destroyers for a deployment in the Indo-Pacific region.

Pyongyang has been subjected to several rounds of UNSC sanctions, with the member states unanimousl voting in favor of a US-drafted resolution to introduce new new restrictions against North Korea over its continued ballistic missile tests on December 22, 2017. Multiple provisions in the resolution sanctioned North Korea's oil and petroleum industries, a move harshly slammed by Pyongyang.

Though Russia and China have backed the sanctions, they have repeated their call to consider the so-called "double freeze" plan aimed to settle the situation on the peninsula, which urges North Korea to halt nuclear activities and calls on the US and South Korea to refrain from joint drills. While Russia Moscow has warned that the humanitarian situation in North Korea is worsening as a result of the imposed restrictions.