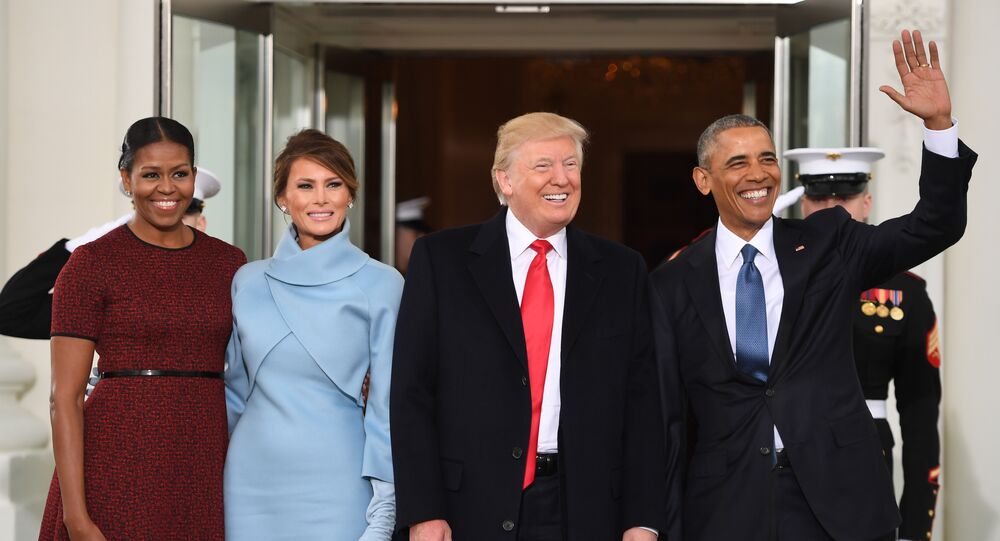 Drum Roll Please: Michelle Obama Opens Up on What Was in Trump's Gift Box

Do you remember that large, square, signature Tiffany & Co box in its classic blue color that Melania Trump, the incoming first lady bestowed to Michelle Obama on the steps of the White House North Portico on Donald Trump's inauguration day last January? At least one White House mystery seems to have been finally solved.

"It was a lovely frame," Mrs Obama said on the Ellen DeGeneres show this week in her first televised interview since leaving 1600 Pennsylvania Avenue. She detailed the meeting still further, hinting that the procedure, which she compared to a strictly protocoled state visit, might have been even more awkward than it looked from the outside.

One perhaps vividly remembers that expression on Michelle's face as she was handed the present – that mixture of surprise and embarrassment when she was frantically casting glances around looking for staffers to take the box from her. But, ironically, not a single person happened to be around.

"And then my husband saved the day – see he grabbed the box and took it back inside. But everybody cleared out. No staff, no one. I was like what do you do with the box?" she added.

Michelle Obama’s inquiring look, as well as Donald Trump's perfectly 'gentlemanlike' gesture – that of leaving behind Melania as he rushed up the White House steps to greet the outgoing First Couple –were certainly the subject of talks on Twitter last January. And they have quickly resumed now that Michelle Obama revealed what was there in the blue box:

One year tomorrow since @MichelleObama made this iconic face — quite possibly the least impressed anybody has ever been receiving a Tiffany box #OneYearInOffice pic.twitter.com/MYr5jWMJqL

When she got left with her best friend, a Tiffany box pic.twitter.com/O7aNod1gNh

Some even made politicized comments drawing parallels between the unexpectedly presented gift and the ongoing most "unwanted" presidency:

After a year, there may be no better metaphor for this presidency than the unwanted and unexpected Tiffany box Melania brought Michelle that we just wanted to get rid of #TrumpShutdown pic.twitter.com/fgq2MMriPw

Myth vs Reality: The State of the Union Under Trump