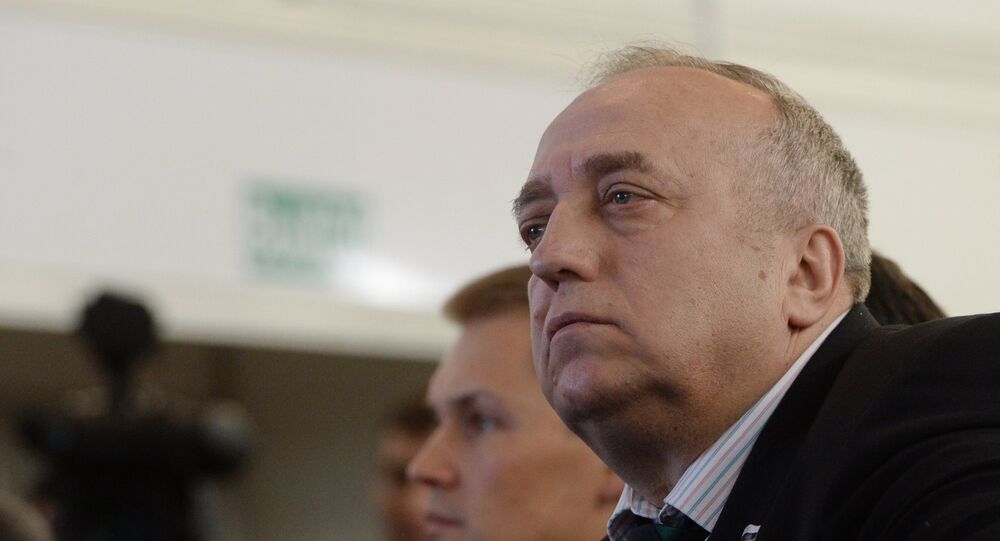 The US Government has released the so-called Kremlin Report as part of its comprehensive sanctions package that targets Russia, according to leading Russian politician Frantz Klintsevich.

Speaking to Sputnik, First Deputy Chairman of Committee for Defence and Security at the Federation Council of the Russian Federation Council Frantz Klintsevich unloaded on the US Department of Treasury for its controversial "Kremlin Report."

The document, submitted to the US Congress as part of the Countering America's Adversaries Through Sanctions Act, identifies some 210 top Russian politicians and businessmen.

Political Destabilization as the Chief Purpose of the Report

© AP Photo / Jacquelyn Martin, File
What You Need to Know About Washington's So-Called 'Kremlin Report'
According to Klintsevich, the purpose of the report is to provoke a "fracture in the Russian government and business circles in an effort to influence the upcoming Russian Presidential elections."

"This is a hostile act with everything that this entails," the Senator stated.

"The purpose of such actions is clear, that is to destabilize the political sovereignty of Russia."

However, the lawmaker pointed out that the document will have an opposite effect of rallying both the elites and Russian voters behind incumbent President Vladimir Putin and strengthening the Russian Government.

READ MORE: Putin 'Sad' About Not Being Included in US 'Kremlin Report'

"The surnames of the people [who were included in the dossier] clearly suggest that they will not react to this provocation."

© Sputnik / Evgeniya Novozhenova
Moscow: Inclusion of Top Russian Officials in 'Kremlin List' Unprecedented
The list of officials featured in the report includes Prime Minister Dmitry Medvedev, Foreign Minister Sergei Lavrov and Chairwoman of the Federation Council Valentina Matviyenko, as well as a number of senior politicians, who are already under sanctions.

"In fact, the report reveals the low levels of competence of those, who have drafted it."

"The Americans simply do not understand the Russian culture, when the country is threatened, the Russian people unite despite their differences and stand their ground," Klintsevich told Sputnik.

Attack on Russia at Large: Economic Effects of the Kremlin Report

© Sputnik / Kirill Kallinikov
European Business Body Says 'Kremlin Report' Vague, Copies Forbes List
The Senator pointed out that the Treasury's document seeks to damage not only the limited number of officials and businessmen, but Russian society at large.

In particular, Klintsevich noted a certain negative effect that the report may have on the Russian economy, calling it "sanctions in disguise, since for some members of the business community, the list constitutes a black mark."

At the same time, the lawmaker highlighted that Russia remains "self-reliant" and will only benefit from the current situation in the long-term.

"Although we prefer cooperation in such fields as economy and technology, Russia can develop independently from the West."

"The opposite cannot be said about our European partners, who need the Russian market for sustained economic development."

Earlier, Belgian Prime Minister Charles Michel, who is currently on a working visit to Moscow, confirmed that the EU will not be boosting sanctions against Russia in the wake of the Kremlin report.

© Sputnik / Vladimir Vyatkin
US 'Kremlin Report' Tool of Unfair Competition - Military Cooperation Service
Klintsevich stated that another aim of the report, which lists the head of the State defence company Sergey Chemezov, was to put pressure on international customers.

"The US Government engages in unfair business practices, as it seeks to forego honest competition with the Russian companies."

"In many respects, the US is falling behind the Russian defence sector, as the price-quality ratio confirms the dominance of the Russian producers."

Klintsevich, however, affirmed that major customers of the Russian defence sector, such as China, India and Turkey, will not be discouraged by the US sanctions.

The Senator pointed out that these leaders of these countries understand that "the weapons, which they buy from Russia are qualitatively better and twice as cheap as US arms".

© Sputnik / Alexey Vitvitsky
Russia Prolongs Counter-Sanctions After US, EU 'Increase Level of Conflict'
When asked about the official response to the Kremlin report, Klintsevich said that Russia "will wait and see what follows" and will respond accordingly.

However, the lawmaker noted the poor state of affairs between Russia and the US, stating that US President Trump is being "held hostage" by the anti-Russian lobby in Washington.

"The relationships are currently at a dead end… We expect more sanctions to follow," Klintsevich concluded.

In 2014, the US introduced sanctions against Russia following the Ukrainian crisis and Crimea's reunification with Russia, and later enhanced the existing regime because of the alleged Russian meddling in the 2016 US Presidential elections, despite the utter lack of evidence.

KLINTSEVICH: ASSASSINATIONS AND PROVOCATIONS WILL NOT DISRUPT PRESIDENTIAL ELECTIONS IN CHECHNYA