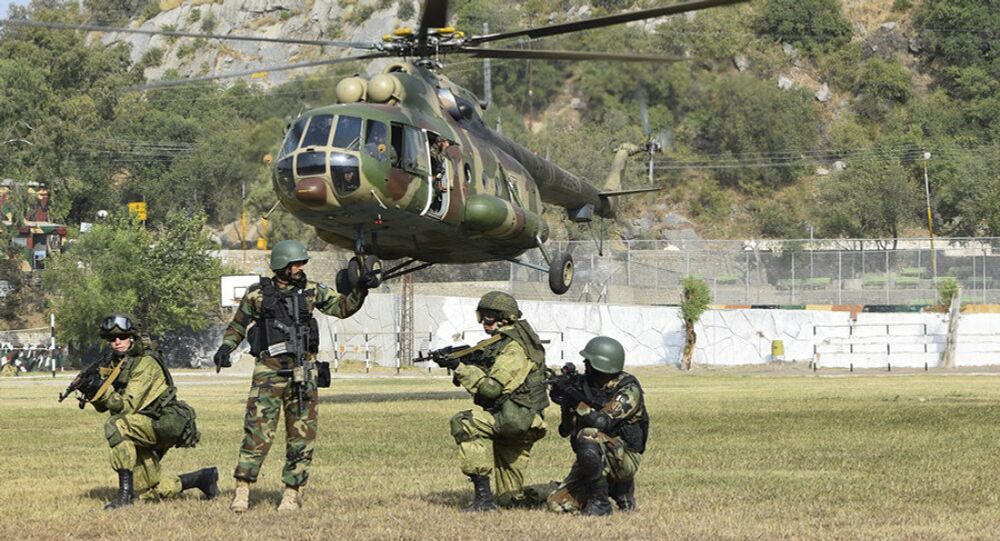 DAVOS (Sputnik) – Pakistan is willing to strengthen ties with Russia in the area of military cooperation, especially in counterterrorism, and wants to see more Russian investment in its energy sector, Pakistani Foreign Minister Khawaja Muhammad Asif told Sputnik in an interview.

“Our military cooperation with Russia has definitely improved in the last 4 years. As a former defense minister, I have the first knowledge of that. But there is still a lot of room for improvement, what we have is not enough and can be multiplied in many times. We look forward to increasing our cooperation in the military area, especially for counter-terrorism purposes, and we also look forward to the Russian investment in energy sector also, in oil and gas and electricity,” he said.

The minister noted that Russia and Pakistan had common interests in the areas of counterterrorism, fight against drugs, fight against human trafficking and peace settlement in Afghanistan.

Pakistan is planning to hold new joint military exercises with Russia in 2018, he said.

"Yes, obviously," he said, when asked whether the joint drills would take place this year.

The minister noted that joint military exercises between the two countries took place “on regular basis.”

US Financial Aid to Pakistan

“The point is that we can survive without their so-called financial assistance. That is not a problem. It definitely affects our relationship. It increases the trust deficit between the two states. Reliability of the United States in our eyes is definitely going down," he said.

The minister stressed that the fight against terrorism was a problem for Pakistan, and Islamabad took care about it “better than anyone else in the world.”

On January 1, US President Donald Trump accused Islamabad of providing a "safe haven to the terrorists" despite his country's multi-billion assistance to Pakistan. On January 4, the US Department of State stated that Pakistan was not being aggressive enough in attacking the Afghan Taliban terrorist group or the Haqqani Network (affiliated with al-Qaeda and Taliban terrorist groups, both banned in Russia) and announced the suspension of security assistance to Islamabad.

Pakistan is ready to participate in the peace conference on Afghanistan, which is due to take place in March in the Uzbek capital of Tashkent, if invited, Khawaja Muhammad Asif said in an interview.

"We have a very strong commitment to peace in Afghanistan. We would like to see peace coming back to Afghanistan. I am aware that there is this meeting taking place. If we are invited, we will definitely go to take part in it," the minister said, when asked whether Islamabad was planning to attend the conference.

On January 19, Uzbek Foreign Minister Abdulaziz Kamilov announced during the UN Security Council meeting that the agreement was reached on holding an international conference on peace and security in Afghanistan in Tashkent in March.

The recent successes in the fight against the Daesh (outlawed in Russia) terrorist group have prompted the jihadists to move from the Middle East to other countries, such as Afghanistan, Khawaja Muhammad Asif said.

"People are saying that Daesh has finished in Iraq, and Daesh is on the run in Syria. But Daesh has just changed the address — they have come to Afghanistan. They are not finished. It's just the change of place," Asif said.

The diplomat added that the militants moving to Afghanistan from the Middle East could destabilize a new region either Central Asia or South Asia.

Pakistan is not providing any safe haven to the Taliban group and sees the US accusations in this regard as an attempt to put responsibility for the failure of its own strategy in Afghanistan on Islamabad, the Pakistani foreign minister said.

"I think Americans are being unfair, they are on both sides… We have over 3 million of refugees. they have families, relatives. If somebody is coming to Pakistan, that does not mean they plan or execute or have safe havens in Pakistan. I think the US is just trying to put on us the responsibility for their failures in Afghanistan," Khawaja Muhammad Asif said.

The diplomat added that Taliban did not need "any safe havens or any organized presence in Pakistan" as the group was controlling about 40 percent of Afghan territory.

On Monday, White House spokeswoman Sarah Huckabee Sanders said the United States is calling on the government of Pakistan to arrest and expel Taliban leaders who are using the country as a safe haven.

Pakistan is ready to provide assistance to Bangladesh to cope with the ongoing Rohingya refugee crisis if asked, foreign minister said.

"If Bangladesh wants us to help in refugee crisis, we are ready to help. But the state of our relationship with Bangladesh is not the way it should be. Bur as far as refugees are concerned, we will be glad to provide help to Bangladesh," Asif said.

The recent outbreak of violence in Rakine and subsequent influx of refugees to Bangladesh started in August 2017. Then the country's authorities launched an operation against Rohingya militants in response to coordinated attacks on several police posts.

According to the International Organization for Migration (IOM), more than 650,000 refugees have fled to Bangladesh in the recent months fleeing from violence.