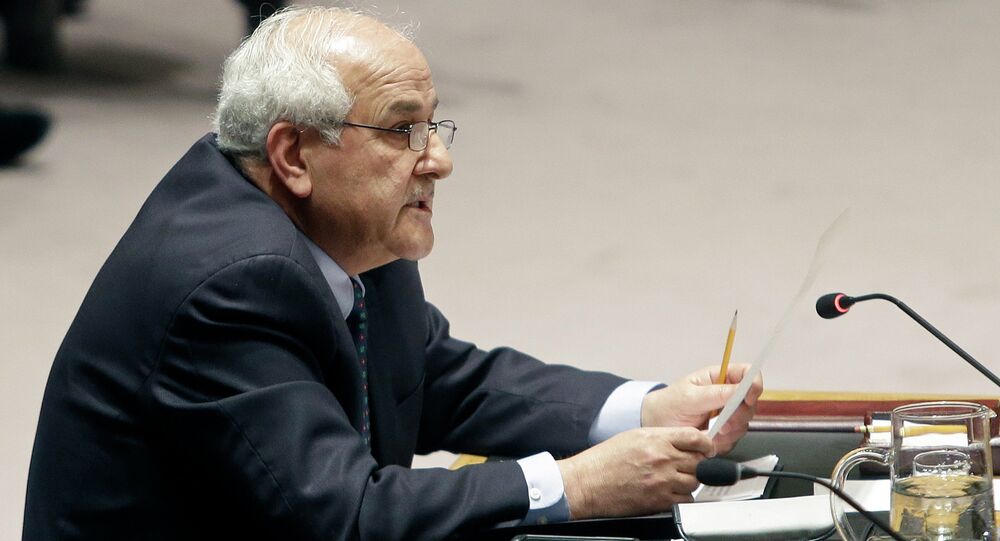 MOSCOW (Sputnik) — Riyad Mansour, the Palestinian envoy to the United Nations, told Sputnik that US tactics manipulating aid amounts to countries in order to get them to change their policies are unacceptable and violate UN principles.

"We do not accept when some states use money to apply pressure on us to sort of accept things that we don’t want or to pressure us to go along with the violation of the international law as the United States did. The United States used threats of cutting funds and Pakistan is one example. These tactics are unacceptable and these tactics will only deepen the divisions and conflicts between nations, they will not bring peaceful diplomatic discussions," Mansour said.

READ MORE: Abbas Warns Israel to Rethink 'Apartheid' Policy 'Before It's Too Late'

On January 16, Washington said it would withhold $65 million out of the expected $125 million donation to the United Nations Relief and Works Agency for Palestinian Refugees (UNRWA), which helps multiple Palestinian refugees across the world. The agency spokesman told Sputnik on Wednesday that this decision might lead to staff lay-offs.

Palestine will consider revising its decision to freeze the recognition of Israel once the latter stops undermining mutual peace accords and recognizesthe State of Palestine, Riyad Mansour, the Palestinian envoy to the United Nations, told Sputnik.

According to the Palestinian envoy, the suspension of security cooperation was the most important aspect of the freeze decision.

"It cannot be a one-way street for Israel to choose what it likes and violate the rest. That is why we are suspending bilateral security cooperation. The Central Council reaffirmed the previous vote by the same Palestinian Central Council in 2015 to suspend security coordination," Mansour added.

Earlier this month, the Palestinian Central Council (PCC), one of the Palestine Liberation Organization's (PLO) governing institutions, decided not to recognize the state of Israel until it does the same for the Palestinian state. Nabil Shaath, the foreign affairs adviser of Palestinian President Mahmoud Abbas told Sputnik that Israel does not implement the 1993 Oslo accords, which provide the founding principles of the self-government arrangements on the Palestinian territories and mark the start of a peace process aimed at fulfilling the right of the Palestinian people to self-determination.

The Israeli government refuses to recognize Palestine as an independent political and diplomatic entity and continues to build settlements in occupied areas, despite objections from the United Nations. The State of Palestine is recognized by most states outside of Europe and North America, totaling over 190 countries.

Riyad Mansour said that Palestinian leader Mahmoud Abbas ordered to hold consultations with UN Security Council member states on the prospects of admitting Palestine to become a full member of the United Nations and on the issue of the United States likely vetoing Palestine's membership.

© REUTERS / Amir Cohen
Simple and Clear? Netanyahu Blames Palestinian President Abbas for Disrupting Peace Process
“Submitting a request in the SC for admission as a state, it is in our hands but the United States of America will veto our draft resolution and therefore we then won’t be able to acquire a full membership in the UN as a state but we can if a political decision is made by the leadership to do so. I was in Ramallah for the Palestinian Central Council meeting and the president is interested in going in that direction. We will start consultation with the members of the SC to see the mood and the feeling about this issue knowing very well that the United States will veto it,” Mansour said.

The State of Palestine was given a non-member observer status in 2012 after applying for membership in 2011.

The renewed bid comes after the recent US decision to recognize Jerusalem as the capital of Israel, which sparked negative reaction from many countries around the world, primarily in the Middle East.

Russian Foreign Minister Sergei Lavrov said on Friday that Moscow maintained its suggestion to Israeli Prime Minister Benjamin Netanyahu and Palestinian President Mahmoud Abbas to meet in Russia with no preconditions. The work on such a meeting was underway last year.

"Russia can play a big role. I know that the Russian leadership has called for a summit under the auspices of Russia. We were ready to participate, Israelis said 'no.' As far as I am concerned, from our side, we will respond in a positive way to the Russian call," Mansour said.

The Palestinian envoy explained that the UN Security Council Resolution 1850 authorized Russia to urge for an international conference, adding that Palestine would support Moscow if it did convene such a meeting.

"We do not accept the manipulation by the United States of the peace process and we want an international mediation and if our Russian friends call for such conference, it will be in line with what we are advocating when saying that one country cannot be the only country that supervises the process between us and Israelis," he added.

Mansour urged for "a collective approach" at any platform, including the Security Council, the international conference in Moscow or the Middle East Quartet plus China and the leaders of the Arab states.