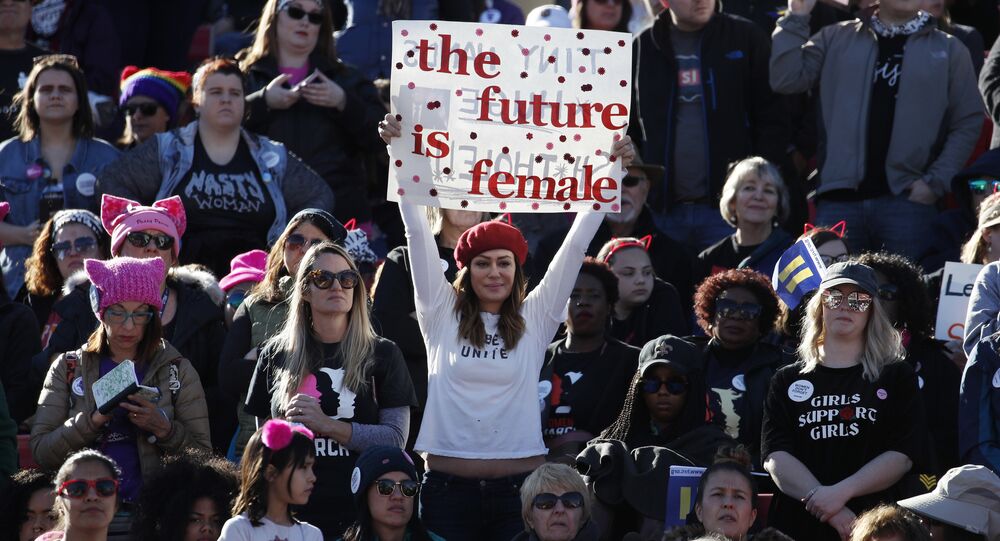 On Saturday, hundreds of thousands of women and other activists gathered for the second Women’s March in nationwide protest of US President Donald Trump’s controversial policies, one year after he was inaugurated in the White House.

"Your vote is the most powerful tool at your individual disposal," actress Eva Longoria said during the Los Angeles rally. "Everybody who has the privilege of voting must do so."

Trump's reaction on Twitter was a pat on the back.

"Beautiful weather all over our great country, a perfect day for all Women to March," Trump tweeted. "Get out there now to celebrate the historic milestones and unprecedented economic success and wealth creation that has taken place over the last 12 months. Lowest female unemployment in 18 years!"

According to the Labor Department, female unemployment was 3.7 percent in December while overall the US unemployment rate was 4.1 percent during the same time period.

However, even though female unemployment has decreased, Katie O'Connor, a 39-year-old lawyer from Knoxville, Tennessee, who traveled to Washington DC to attend the National Mall protest, isn't convinced that Trump is realistically advocating for women.

"I don't believe this administration is going to do anything good for women," she said, cited by Reuters.

The second Women's March comes after multiple sexual harassment and misconduct allegations against men in entertainment and politics have surfaced in recent months, as well as the rise of the #MeToo movement on social media, which continues to shed new light on the shockingly high percentage of women in America who have experienced sexual harassment and/or misconduct throughout their lives.

In Los Angeles, actress and model Olivia Munn spoke about the prevalent and endemic misogynistic culture in a society that tolerates the mistreatment of females everywhere.

"When it happens to a girl, it often means that she has to stand alone," Munn said, referring to sexual assault. "We will always support you, stand beside you, so you don't have to stand alone."

Editor: Sexual Misconduct Allegations May Not End as ‘More Names Will Come Up'