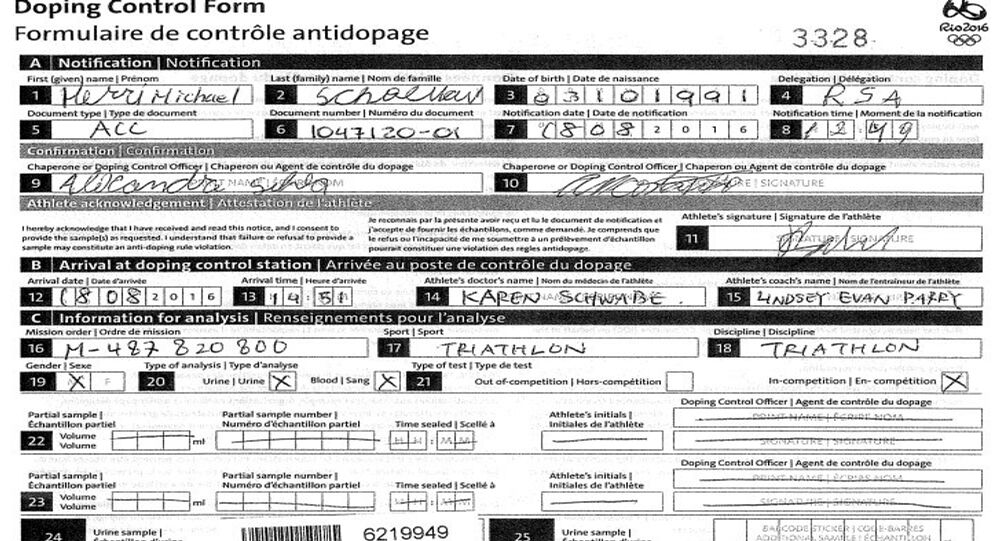 Shocking internal International Olympic Committee emails obtained by Sputnik reveal that in 2016 a bronze medal winning South African triathlete tested positive for a "performance improving" drug, without providing a Therapeutic Use Exemption from his doctor.

Henri Schoeman is a 27-year-old South African triathlete, who has racked up an impressive record over the course of a comparatively brief sporting career — he represented his country at the 2016 ITU World Triathlon Grand Final in Cozumel, winning gold, the 2016 Rio Summer Olympics, where he won bronze in the men's triathlon, and the 2014 Commonwealth Games, securing a silver medal in the mixed relay. His 2016 bronze marked the first Olympic medal South Africa has won in the sport.

Tues — In bed, in tears, unable to train because of a fever.

However, a shocking new leak of the internal Olympic staff emails reveals that he had tested positive for prednisolone, a banned performance-improving glucocorticoid. However, amid the doping witch hunt that left Russia banned from the Olympic Games, no disciplinary action was taken against Shoeman and no investigation into doping rules violations was launched.

The leaked chain of correspondence, acquired by the Fancy Bears hacking group, dates from August 22 2016, a day after the Rio event ended. The first email, sent by staffer Pascal Waeber to Dr Richard Budgett, the Medical and Scientific Director of the International Olympic Committee, notes a new "AAF" (Adverse Analytical Finding) has been identified, without a "TUE" — Therapeutic Use Exemption. TUEs can authorize athletes to take otherwise banned drugs to treat illnesses or conditions.

Budgett's response is perhaps best described as anxious damage control — he notes the case "may not need to proceed to an AAF" depending on how the drug was administered.

"Can you please find the DCF [Doping Control Form] ASAP and either scan to me or send the substances declared…I will need to check whether he was seen by Rio 2016 medical and if still no evidence of a prohibited route will need to send notification of an AAF. I see he got the bronze medal," Budgett wrote.

It transpired Schoeman's use of prednisolone was declared on his DCF, but no needle form had been submitted to the International Olympic Committee (IOC). However, the usage was declared up to July 17 that year — "well before the games started," notes Budgett — meaning any TUE would date back to that time, if at all.

In any case, IOC anti-doping member Cherine Touvet chimes in to say it is the South African National Olympic Committee's responsibility to inform the IOC they have secured a TUE for any offending athletes. Budgett responds that it would be "inconsistent with our rules and advisory letters not to issue an AAF, as that is exactly what we said would happen!"

Nonetheless, Budgett is "still hopeful" a TUE will appear, as Schoeman did declare his usage — and remains in damage control mode, asking whether a "retroactive TUE" would be accepted if a medical record "justifying the treatment" can be found. He's also keen to move as quickly as possible, as "[waiting] a week or so" before formally noting it would "look bad."

The IOC's legal department is then directed to dispatch a notification to the South African National Olympic Committee.

The outcome of that dispatch is unknown, and it is notable Schoeman's name has not been connected with doping at any point since. Nonetheless, the method by which Schoeman administered the drug likewise remains unknown.

Prednisolone is banned by the World Anti-Doping Agency when orally, rectally or injected into the bloodstream or a muscle, on the basis it can "produce a feeling of euphoria, potentially giving athletes an unfair advantage." As a result, athletes may only apply the drug topically, for skin rashes, unless a TUE can be produced.

The ability of prednisolone to augment athletes' abilities is backed by empirical evidence. In 2007, the US National Institute of Health (NIH) conducted a double-blind study, in which ten male athletes completed two cycling trials — one group was given a placebo, the other oral prednisolone.

​"[Presdnisolone] intake did seem to significantly improve performance during submaximal exercise, with concomitant alterations in hormonal and metabolic responses. Further studies will be necessary to elucidate the mechanisms of these hormonal and metabolic changes, and to determine whether the changes may be associated with the marked performance improvement obtained," the NIH concluded.

The use of prednisolone has seen many athletes in a variety of sports sanctioned — perhaps most famously, UEFA suspended AC Milan striker Marco Borriello for three months in 2006, after he tested positive for the substance.

Evidently, testing positive for a "performance improving" drug has had little impact on Henri Schoeman's career. The South African triathlete wasn't barred from participation in sporting events, his records weren't annulled and his Olympic medal is still in his collection.

The shocking revelation comes as the world braces for this year's Winter Olympics amid an ongoing doping probe that has left multiple Russian athletes without the right to compete — despite all having tested negative in the run-up to the games.

© AFP 2020 / Marc BRAIBANT
Russia's Investigative Committee Offers to Work With WADA on Rodchenkov Case
In 2016, the head of the WADA investigative team Richard McLaren started an investigation into the allegations of doping abuse in Russia. He presented a two-part report which claimed the existence of a state-supported doping program in Russia. Russia has repeatedly denied accusations that it ran a doping program but acknowledges that national sports face some problems with doping that are being tackled now.

Despite the lack of evidence, the investigation triggered a massive scandal, which resulted in sanctions against Russian athletes while depriving many of them of medals won at the 2014 Sochi Olympics. The Russian team will also not be able to compete at the Olympic Games in Pyeongchang under its national flag.