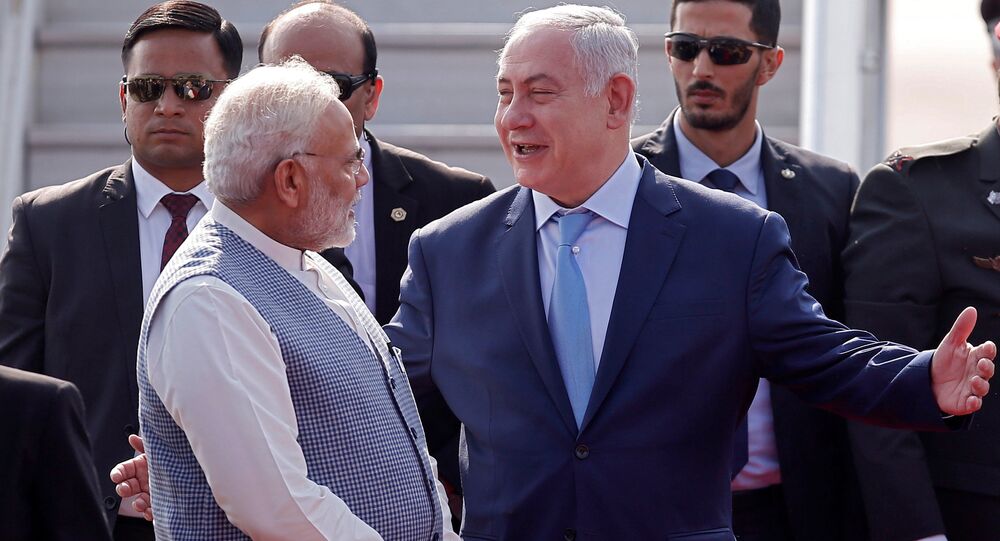 Israeli Prime Minister Benjamin Netanyahu arrives in New Delhi on Sunday for a six-day visit which comes a few weeks after India voted to nullify the US recognition of Jerusalem as Israel's capital in the UN General Assembly.

Scores of Muslims have taken part in a rally in New Delhi to say "no" to Israeli Prime Minister Benjamin Netanyahu's forthcoming visit to India.

During the rally, the protesters set an effigy plastered with Netanyahu pictures on fire. Anti-Israeli protests were also held in about 1,000 villages across India, according to media reports.

On December 20, the UN General Assembly (UNGA) voted 128 to 9 to condemn the US decision to recognize Jerusalem as the capital of Israel. It declared the US move "null and void," although this declaration is non-binding.

India voted in favor of the document, which was harshly criticized by Tel Aviv, which declared that it refuses to accept the UNGA's decision.

#WelcomeNetanyahu
One criminal will break protocol to welcome another criminal…Welcome to India of your choice NETANYAHU pic.twitter.com/OtfHq08N9j

Earlier in December, US President Donald Trump recognized Jerusalem as Israel's capital, ordering the State Department to launch the process of moving the US Embassy to Jerusalem.

READ MORE: 'Jerusalem Is Not For Sale': Palestine Fires Back at Trump After Aid Threat

The decision caused an international uproar, with Palestinian officials calling it a provocation and President Trump's biggest mistake.