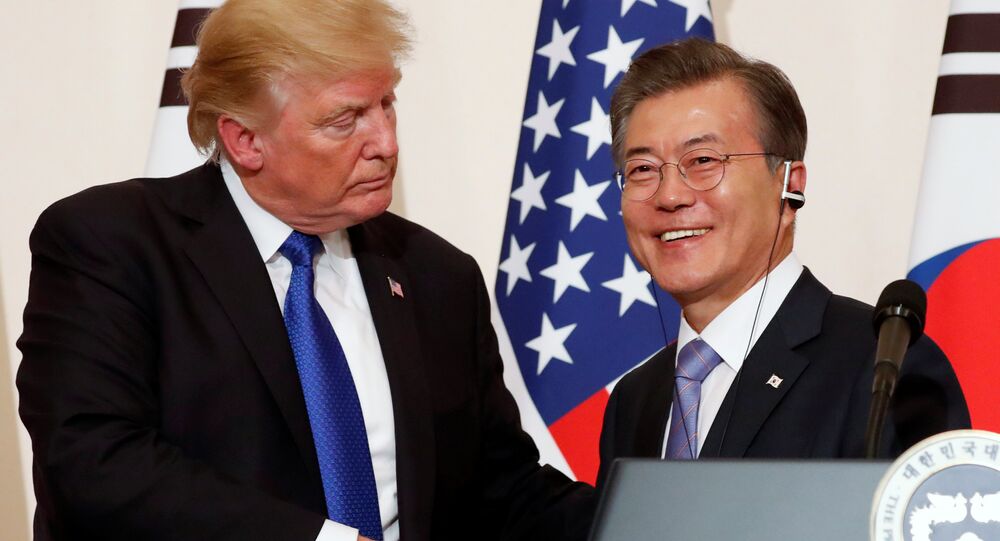 WASHINGTON (Sputnik) - US President Donald Trump told his South Korean counterpart President Moon Jae-in the United States would be willing to hold talks with North Korea at the right time and under the right circumstances, the White House said on Wednesday in a readout of a phone call between the two leaders.

"President Trump expressed his openness to holding talks between the United States and North Korea at the appropriate time, under the right circumstances," the readout said.

Later on, Donald Trump told reporters that he hoped the initial talks between South Korea and North Korea would lead to a global diplomatic success.

"Hopefully it will lead to success for the world, not just for our country, but for the world. And we'll be seeing over the next number of weeks and months what happens," Trump said.

Trump also credited the US pressure campaign for paving the way toward the negotiations between the two countries.

"Without our attitude, that would have never happened," Trump said.

Both the United States and South Korea "underscored the importance of continuing maximum pressure campaign" against Pyongyang, White House spokesperson Sarah Sanders said in the statement.

On January 9, the delegations of the two Koreas countries met at a ministerial level in the so-called Peace House in the demilitarized zone to discuss ways to improve relations and on the possible participation of North Korean athletes in the upcoming Olympic Games in Pyeongchang.

© AFP 2020 / VLADIMIR SIMICEK
'Positive Signal for Region': Austrian Chancellor on Pyongyang-Seoul Talks
Prior to the talks, Donald Trump praised his own role in the resumption of contacts between Pyongyang and Seoul and called the talks between the two states "a good thing." Additionally, the US president expressed hope that the dialogue between the two nations would continue after next month's Olympics.

At the same time, according to the White House, officials from Trump's administration have been in contacts with South Korea regarding the country’s talks with North Korea on easing military tensions.

However, before the talks were announced US Envoy to the United Nations Nikki Haley said that the US wouldn't recognize any possible talks between the two Koreas unless the talks result in the ban of all nuclear weapons on the Korean Peninsula.