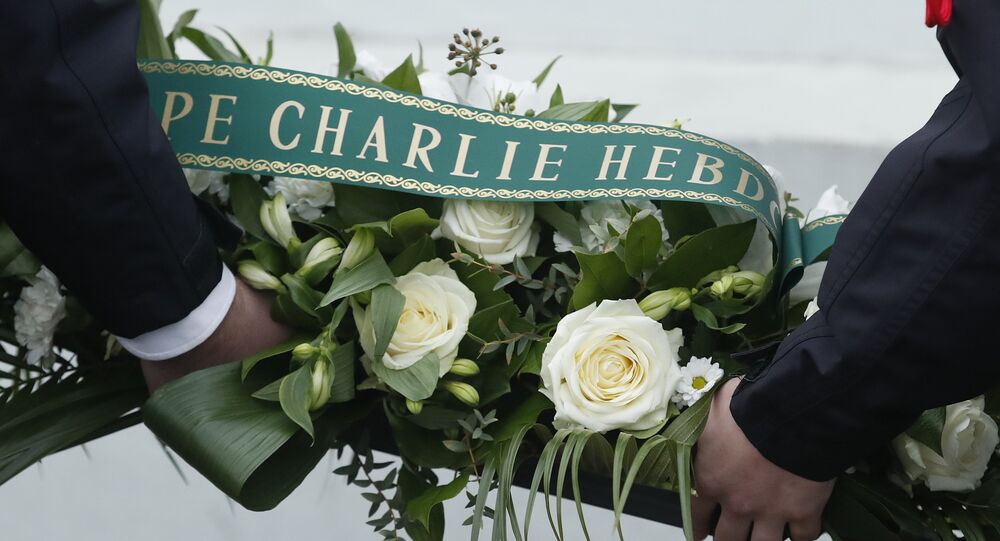 Sunday marks three years to the day since Islamist gunmen attacked the offices of the French ever-irreverent magazine Charlie Hebdo.

France has been paying tribute to the 17 victims of the deadly three-day spree, which marked the first in a string of Islamist attacks in France.

French President Emmanuel Macron, along with Paris Mayor Anne Hidalgo and Charlie Hebdo's chief editor and cartoonist Laurent Sourisseau, led a somber tribute. They laid wreaths and observed moments of silence outside the former premises of the satirical weekly and the Hyper Cacher supermarket in Paris.

Surviving journalists have also paid tribute to the victims. "Three years in a tin can," reads the cover of the magazine’s first issue of 2018. The cartoon was drawn by Riss, who replaced the murdered director, Charb. Back on January 7, 2015, Riss was shot in the shoulder with a Kalashnikov and has lived in fear since then.

In his latest drawing, a frightened face peers through a peephole in a bolted steel door. "The Islamic State calendar?" a character asks, referring to the French tradition of selling New Year’s calendars door to door. "We’ve already given," another one replies.

The Charlie Hebdo rifle attack was carried out by brothers Said and Cherif Kouachi on January 7, 2015, leaving 12 people dead. In the following assault by their accomplice on the kosher supermarket in Paris another 4 people were killed, as well as a policewoman in a separate attack outside Paris. All three perpetrators were killed in shootouts with police.

Nearly four million people marched through Paris days later under the banner "Je Suis Charlie," and David Cameron and other world leaders joined the march and the slogan became a global cry for supporters of free speech.

Nevertheless, journalists currently working for Charlie Hebdo increasingly complain that the government is not paying enough attention to their security, citing they have to lay out a staggering 1.5 million euros yearly to a private firm to keep them safe. While the government provides security for public figures working in the editorial office, the others are left alone with their fears and suspicions. Fabrice Nicolino, who sustained multiple Kalashnikov injuries in the 2015 attack, is one of them.

"Is it normal that more than one in two issues of a magazine sold in a democratic country should go to finance the security of its offices and the journalists who work there?" Riss asks in his editorial. "Freedom of expression is becoming a luxury item," he has summed up.

Nicolino has appealed to President Macron: "Is it fair that we be forced to privatize our freedom and security by paying a private police force?"

Following the outcry, Macron told The Irish Times about his New Year wish for the press:

"Having heard their appeal, I have asked the interior ministry to evaluate the risk and provide security if the risk is confirmed."

Meanwhile, those identifying with the motto "Je Suis Charlie" have reduced in number from 71 per cent two years ago to 61 per cent today, according to a poll by the national Institute for Public Opinion (IFOP).  Younger French people and the less well-off are the least likely to back Charlie, the poll found. Among those who do not support the irreverent magazine, 38 per cent believe that the newspaper’s satire "goes too far."

'French Gambit': France Comes Up With Plan to Stop Phone Trafficking in Jails