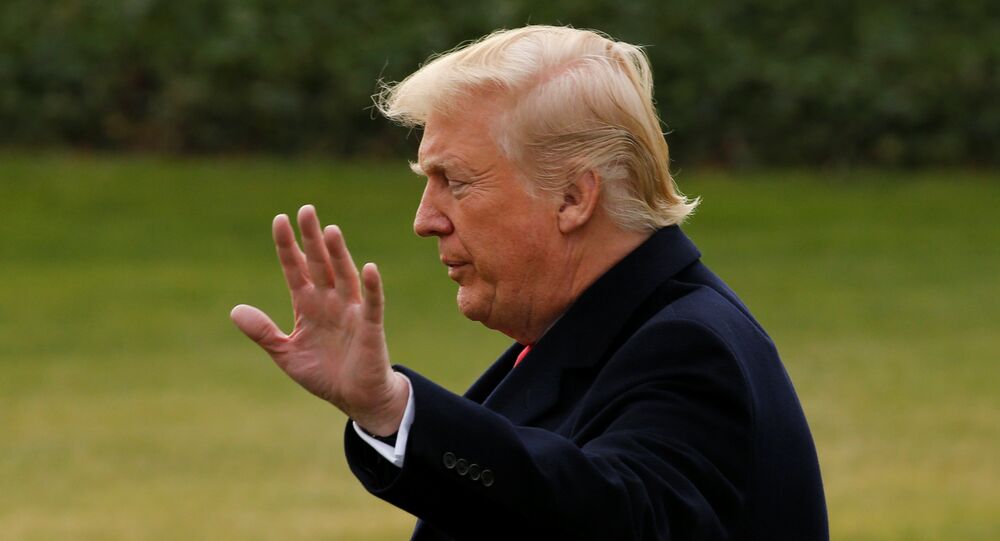 US President Donald Trump is bringing a businesslike approach to negotiating on the international stage by threatening to cut funding to groups that don’t agree with his vision for a way forward.

First, Trump axed more than $255 million in aid funding to Pakistan for its alleged harboring of terrorist groups who attack US troops in Afghanistan. On Tuesday, Trump vowed to cut US aid money to the Palestinian Authority for its refusal to negotiate with Israel.

"It's not only Pakistan that we pay billion dollars to for nothing, but also many other countries, and others. As an example, we pay the Palestinians HUNDREDS OF MILLIONS OF DOLLARS a year and get no appreciation or respect," Trump said in a Tuesday tweet.

"They don't even want to negotiate a long overdue peace treaty with Israel," the US leader said.

"With the Palestinians no longer want to talk peace, why should we make any of these massive future payments to them?" Trump wondered online.

Trump drew heavy criticism from the Muslim and Arab world after recognizing Jerusalem as Israel's capital on December 6, and indeed, many Western allies like the UK, France, Germany and Japan voted in favor of the United Nations resolution declaring the US decision to recognize the divided city "null and void." Palestinians claim East Jerusalem must be the capital of a Palestinian state, which has yet to be fully established in the West Bank and Gaza.

Following Trump's move, Palestinian President Mahmoud Abbas announced that the Palestinian Territories would no longer work with American negotiators to reach a peace accord with Israel.

According to US Agency for International Development (USAID) data, US government agencies have contributed $416 million in foreign aid assistance to groups in the West Bank and Gaza, about $70 million of which has been spent on private sector debt repayments.

"Jerusalem is the eternal capital of the state of Palestine and it is not for sale for gold or billions," a spokesman for the Palestinian Authority said Wednesday.

"He is trying to use blackmail and a blame game against the Palestinians," a Palestinian official told the Guardian Wednesday. "His mistake is that he thinks this is one of the deals he is familiar with. But the Palestinians are not a weak company to be taken over," the official said.

​The impact of the cuts "depends quite dramatically on whether he means stopping aid to the Palestinian Authority or whether he means stopping aid to UNRWA [United Nations Relief and Works Agency for Palestine Refugees in the Near East]," Ali Abunimah, cofounder of The Electronic Intifada, told Loud & Clear on Sputnik Radio Wednesday. The US is the largest single-state contributor to UNRWA, he said.

If the cuts target UNRWA, "that would inflict untold suffering for millions of the most vulnerable people in the world," Abunimah told Sputnik.

The $400 million USAID gives to the Palestinian Authority, however, "is not aid for the benefit of Palestinians. This is another form of aid to Israel," he said. US lawmakers justify appropriating these funds on the basis that the PA helps do Israel's "dirty work" by suppressing Palestinian resistance in the West Bank, Abunimah said.

The Congressional Research Service states that the roughly $5 billion in aid the US has sent to the Palestinian Authority since the mid-1990s has supported "promoting the prevention or mitigation of terrorism against Israel," "fostering stability, prosperity and self-governance in the West Bank that may aid Israeli-Palestinian diplomatic prospects" and "meeting humanitarian needs."