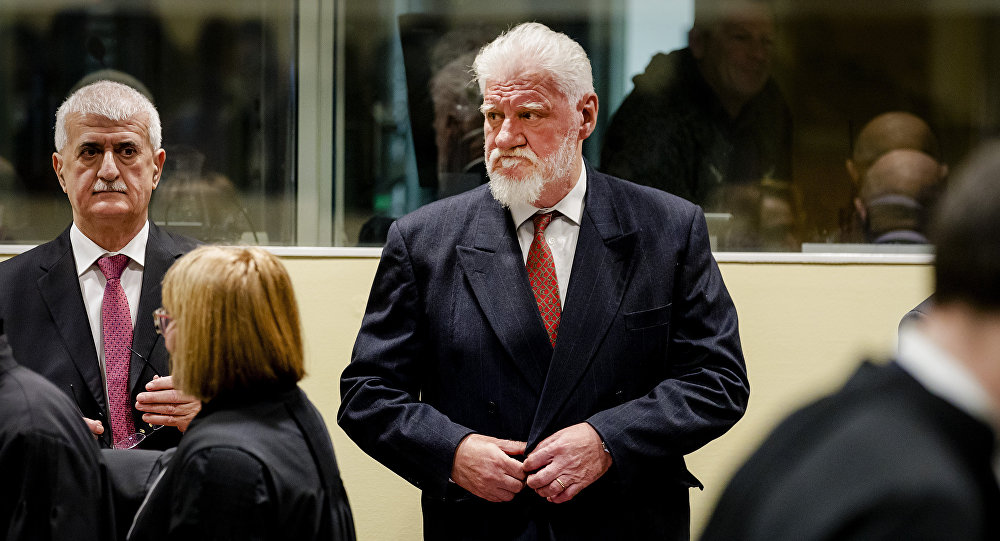 MOSCOW (Sputnik) - The International Tribunal for the Former Yugoslavia (ICTY) has received recommendations to conduct searches in the cells of the defendants and to refrain from direct broadcasting of sentencing judgments following the internal investigation of the suicide of Bosnian Croat wartime commander Gen. Slobodan Praljak.

On November 29, Praljak, on trial for war crimes and crimes against humanity, died in The Hague after drinking what he claimed to be a poison, shortly after the panel confirmed upholding his sentence of 20 years in prison.

"Justice [Hassan B.] Jallow issued recommendations related to search regimes, including for visitors and detainees cells, as well as training courses for security personnel which will be shared with other relevant courts. Additionally, he recommended the introduction of a 30-minute delay for broadcasting of the pronouncement of judgments," ICTY said in a statement on the results of the investigation conducted by the Mechanism for International Criminal Tribunals.

© REUTERS / Peter Dejong/Pool
Ex-Bosnian Serb Leader Mladic to Appeal UN Court's Ruling – Son
At the same time, Justice Jallow, responsible for the investigation, did not identify "any gaps or flaws in the ICTY legal framework with regard to the treatment of detainees at the UNDU [United Nations Detention Unit] and the ICTY premises." He did not propose any changes to ICTY rules and regulations.

An internal investigation confirmed that Praljak died as a result of poisoning with potassium cyanide. According to the investigators, the nature and quantity of poison was such that it could easily have remained undetected even through the most intrusive searches of persons, cells, and other areas.

The investigation of the incident by the Dutch authorities is still ongoing.