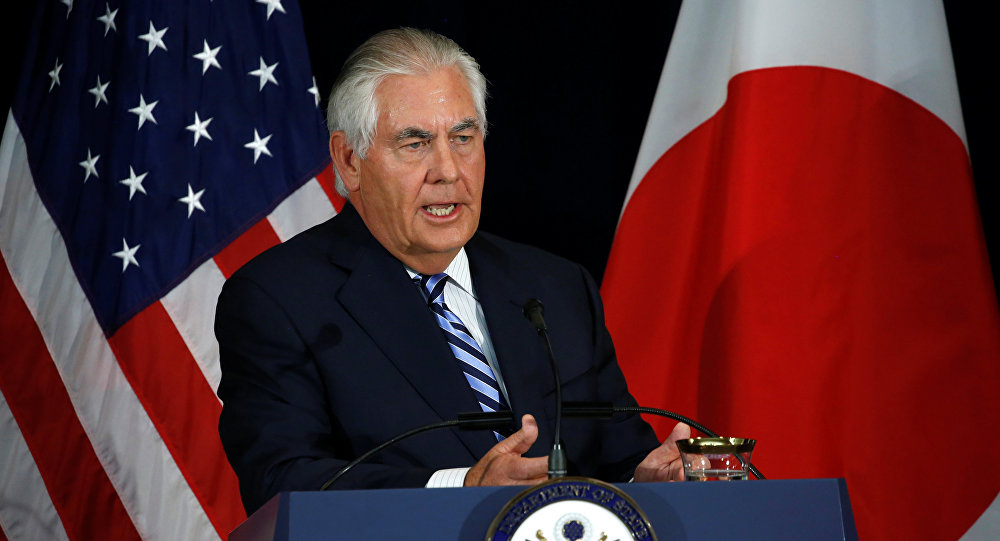 US State Secretary Rex Tillerson has written an op-ed for The New York Times to sum up the results of his diplomacy in 2017. According to Tillerson, there is every reason to "be encouraged by the progress" the US has achieved. Sputnik has read the article and contrasted Tillerson’s statements against the facts. Here’s what we have.

Tillerson: "A door to dialogue remains open, but we have made it clear that the regime must earn its way back to the negotiating table. Until denuclearization occurs, the pressure will continue."

Reality: It is hard to say whether President Trump’s threats towards Pyongyang and his war of words with North Korean leader Kim Jong-un can be regarded as diplomacy or not.

For example, Trump repeatedly vowed to use the military option to resolve the crisis, including threatening Pyongyang with "fire and fury," and also called Kim Jong-un a "little rocket man."

Speaking at the UN General Assembly in September, Trump said that unless Pyongyang backs down, "We will have no choice than to totally destroy North Korea." He added, "Rocket man is on a suicide mission for himself and his regime."

READ MORE: Russia Ready to Be Mediator Between US, North Korea if Parties Want it — Kremlin

Those and other similar remarks have constantly provoked a harsh response from Pyongyang. With its bellicose statements, Washington has not contributed to resolving the crisis diplomatically.

Russia and China have urged restraint and diplomacy amid the ongoing tensions. The countries have also proposed the so-called "double freeze," calling on North Korea to halt nuclear tests and urging the US and South Korea to cease joint drills. This diplomatic initiative, however, was rejected by Washington.

Tillerson: "We will continue to work with our allies and with Congress to explore options for addressing the nuclear deal’s many flaws, while building a like-minded effort to punish Iran for its violations of ballistic missile commitments and its destabilizing activities in the region."

Reality: The final agreement on Iran’s nuclear program was nurtured under former US President Barack Obama and has been a very important step in promoting global peace and stability, the very same goal that Tillerson declares is key for American diplomacy.

The agreement, however, has taken a number of serious hits under Trump, who has called it a "bad deal."

"Iran has been formally PUT ON NOTICE for firing a ballistic missile. Should have been thankful for the terrible deal the U.S. made with them!" Trump said in a Twitter post in February.

Trump has repeatedly vowed to scrap the deal and accused Iran of violating the agreement. In October, the Trump administration announced it would not certify the deal.

Tillerson: "Absent a peaceful resolution of the Ukraine situation, which must begin with Russia’s adherence to the Minsk agreements, there cannot be business as usual with Russia."

Reality: The United States has not been diplomatically involved in the settlement of the Ukrainian crisis. At the same time, significant efforts to bring peace to eastern Ukraine have been made by Germany, France and Russia, as part of the so-called Normandy Four (Normandy Quartet) format.

At the same time, Washington recently announced plans to provide weapons supplies to Ukraine. According to the Russian Foreign Ministry, by making such a move, the US "crossed the line," as American weapons risk escalating violence in Ukraine.

Fight Against Terrorism in Syria and Iraq

Tillerson: "The Global Coalition to Defeat ISIS [Daesh] has accelerated operations and has recaptured virtually all of previously held Islamic State territory in Iraq and Syria. While our military was helping clear Iraq and Syria of Islamic State forces, our diplomats were following up with humanitarian aid and assistance, such as clearing land mines, restoring water and power, and getting children back in school."

Reality: Despite the involvement of the US-led coalition in Syria, the Pentagon’s contribution to defeating Daesh is far from what the Syrian Army did with the support of Russian aviation.

The infographics below provides a detailed assessment of the results of the US-led campaign and the Russian military operation in Syria.