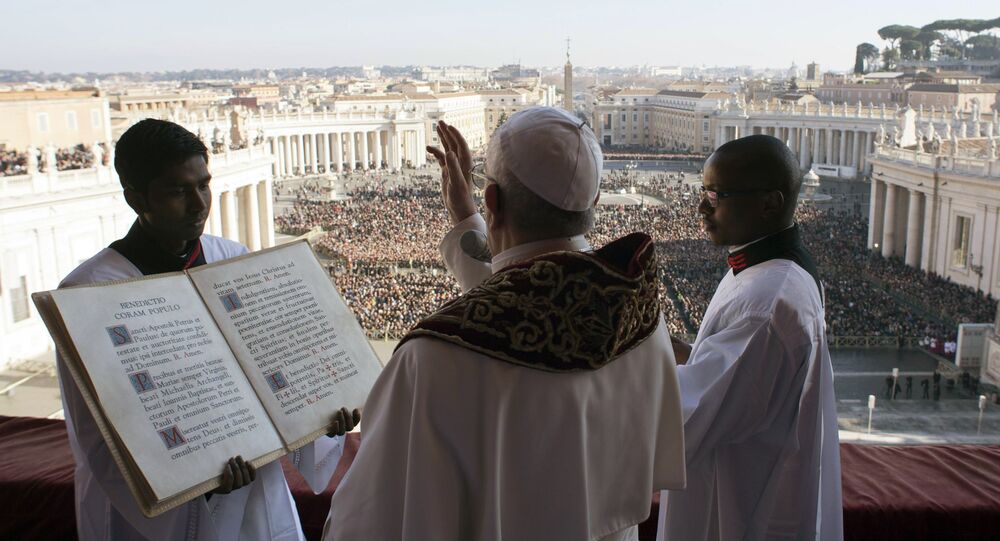 Pope Throws Down Gauntlet to World’s Catholics: Are They Up to the Challenge?

Pope Francis’s Christmas homily seems to have come under direct fire, as the Pontiff weighed in on some of the most sensitive European issues, namely illegal migration and human trafficking.

In his broadly reported Christmas Eve Midnight Mass the Pope drew a comparison between the plight of new-comers to Europe with that of the holy family, forced to desert their own land in search of safety and recognition.

Polish media outlets chose to render the Pope’s words in a most cautious way, taking into account Poland’s utmost reluctance to take in migrants counter to  EU directives, Sputnik Poland reported. With that being said, the Catholic-dominated country cannot seem to get past the pontiff’s outright call to aid immigrants, with the most controversial comments naturally on social media and on mass media websites. Most of them center around  current Catholic dogmas, with some people even saying the Catholic church has of late distanced itself from original Christianity and is becoming closer to Judaism:

"The problem is that Catholicism, or better say Vaticanism, due to its wealth, has more in common with Judaism than with Christianity. The closest to Christians are, perhaps, the Orthodox and Protestants. The Catholic faith and Christianity are, thus, not the same," wrote one Polish reader on Polish Dorzeczy website.

In a comment posted on Poland’s Wprost web page, another reader even compared the Pope’s words to mogul George Soros’s line of thought:

"Damn it. It seems to me the Pope’s ideas are in line with those of Soros. Perhaps, they are friends?"

For many, further immigrant  assimilation in Europe would mean the region becoming increasingly Islamisized, which, they believe, is odd to hear from the head of the Catholic church:

"It’s difficult to recognize him as the Pope, as he is calling for Europe’s Islamization," one of the Internet users made a point in his comment on the Dorzeczy website.

"Thank you Lord for the wisdom of our Pope Francis," one of the Twitterati members wrote.

The majority have lashed out at the Pontiff’s initiative:

"These new-comers will arrive, destabilize the land, tout their own values and refuse to work, walking all over laboring Europeans. They’ll suck Europe dry," one Polish Internet user has spoken out, backed promptly by one more:

"The native white population will be on the decrease, being forced to emigrate. There’ll soon be no one around. The co-called migrants will soon begin to die out, as there’ll be no one to work for them. By doing this [letting in migrants], you’ll make Europe a barren land and eliminate Christianity. What a foul play!"

The English speaking community has demonstrated  equal outrage with the Pope’s words, many ironically pointing to the fact that the Pontiff, naturally, did not mean the Vatican as a possible destination for welcoming new-comers:

At this moment in time, it's embarrassing to be Catholic.

But, of course, not in the Pope’s house. And if he allows them inside the Vatican…..he’ll just move somewhere else. After all, he wasn’t making the house payments.

One Twitterian remarked tongue-in-cheek it was yet another Jesuit trick, apparently referring to the Pope’s previous position as the head of the Rome-based Jesuit order:

Another one sounded serious enough:

he's not a standard Catholic. He's a Jesuit. The black pope. look them up.

Another web user made hay of the Pope’s words, adducing additional Biblical facts on the holy family’s fleeing to Egypt:

Except they weren't. They only came to pay their taxes.

They were in Bethlehem because of the Census, and went to the temple 40 days later. Them fleeing to Egypt literally has nothing to do with Christmas, and they also went back home after Herod died. #DictatorPope

Many generally dismissed the comparison suggested by the Pontiff as irrelevant with regard to Christmas celebrations:

Oh for Pete's sake. "And the Word became flesh, so that all may be given documents of citizenship" is not why we celebrate Christmas.

​In a solemn Christmas Eve mass on Sunday, the 81-year-old Pope, born into the family of Italian immigrants in Argentina, delivered a homily, in which he equated the Holy Nativity story to the global refugee crisis, promptly raising controversy among both believers and agnostics.

Jingle All the Way: Christmas Celebrations Around the World