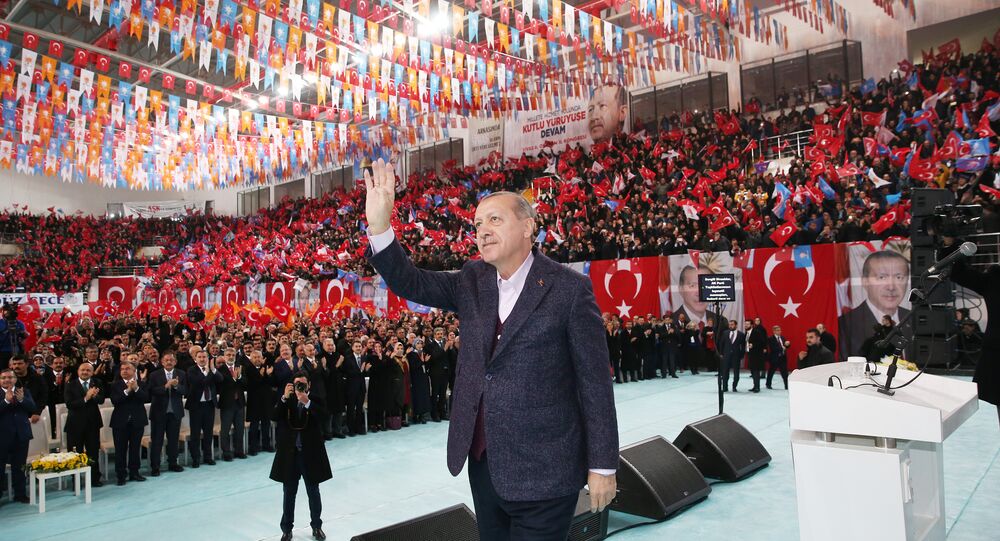 Costly Embrace: Man in Turkey Rushes to Hug Erdogan During His Speech (VIDEO)

During his recent speech beforeparty members Recep Tayyip Erdogan came on stage to greet his delegates when a man came rushing at the president and grabbed him by the shoulders.

The man managed to break through to Erdogan, bypassing the guards and tried to embrace the president, however, Erdogan's bodyguards were quick to react and pulled the man back leading him away from the hall.

During the man’s interrogation at the Security Department it became known that his name was Huseyin Demircan and he only wanted to embrace the head of state.

"I just wanted to hug him, I did not have any malicious intent, and I was misunderstood," Demircan said.

​During questioning it was found out that Demircan is the founder of the War Veterans Fund in Sirnak. Many members of his family had suffered at the hands of the Kurdish Workers’ Party (PKK) affiliates.

“Thirteen of my relatives, including my mother, two older brothers and two sisters, died at the hands of the PKK [Kurdistan Workers' Party]. I really love our president, and I wanted to express my gratitude by embracing him, that’s why I went on stage,” Demircan said.

He added that his actions were misunderstood and he never intended to cause a panic.

After being interrogated by the Security Department, Demircan was released.

Erdogan on Arms Supplies to YPG: 'Is US Going to Use Them Against Russia, Iran'?