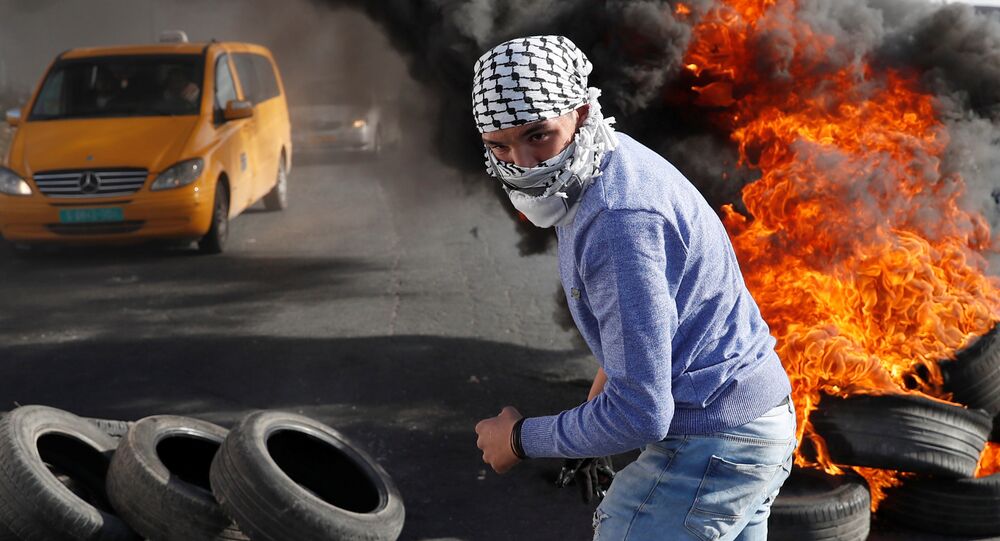 The Kremlin has explained Russia's position on the Israeli-Palestinian conflict, urging not to take any steps, which might lead to the escalation of tensions.

"Russia cannot resolve this [Israeli-Palestinian] conflict. Neither Russia nor the US can. Russia, however, can aid in the resolution of this conflict by continuing its well-known policy both through bilateral contacts with Israel and Palestine, and within the framework of multilateral formats, " Dmitry Peskov, the Kremlin spokesman told reporters, stressing that no one can settle the issue for Israel and Palestine.

The Kremlin spokesman has specified that Russian President Vladimir Putin did not schedule any bilateral meetings with both Israeli and Palestinian leaders till the end of the year.

"The most important thing … is to avoid steps which could lead to a substantial split in the international community and escalation of tensions between the main participants of the Middle Eastern resolution," the Kremlin spokesman added.

The statement was made the day after Russian Foreign Minister Sergei Lavrov has affirmed that Moscow had been urging the sides to promptly start direct talks, aimed to find a solution "acceptable to all and based on the well-known UN decisions" when commenting on the issue. This position was echoed by the Russian deputy envoy to the UN, saying that Moscow is ready to become an "honest mediator" of the Israeli-Palestinian settlement.

In a bid to fix the situation, Egypt has come with a draft resolution on the issue, which purported to have altered the character, status or demographic composition of the Holy City of Jerusalem have no legal effect, are null and void and must be rescinded. The initiative, however, was vetoed by the United States, despite all 14 other UN Security Council members supporting it, with American envoy to UN Nikky Haley calling the document "an insult."

The Israeli-Palestinian conflict has recently intensified over the controversial US move to recognize Jerusalem as Israel's capital, taken by Donald Trump on December 6, sparking public outrage and massive protests of the Muslim community around the world.

The international community does not recognize the annexation of the disputed area by Israel and considers the status of the city to be one of the core problems of the Middle East conflict, which should be resolved on the basis of an agreement with the Palestinians, which claim the eastern part of Jerusalem.

The Kremlin spokesperson has also commented on possible measures to counter the potential continuation of sanctions against Russia.

"Indeed, measures on the protection of our interests are being designed and undertaken in Moscow in the context of potential continuation of restrictions and sanctions by various countries, which we continue to consider unlawful," Peskov told reporters, adding that it would not be right to publicly disclose all the measures aimed at hedging risk.

The statement was made after the United States had blacklisted two Russian defense companies the day before, following US President Donald Trump's approval of new sanctions against Russia earlier this month over the alleged violations of the INF deal. The move echoed the US Secretary of State Rex Tillerson's accusations made in September, regarding the alleged violations of the treaty, a claim which has been repeatedly denied and called groundless by the Russian Foreign Ministry.

This stance has been repeatedly refuted by the Russian side, with Putin assuring that Russia had no intention of withdrawing from any treaty that shapes international security, adding that the accusations were used by Washington as a reason to withdraw from the accord.