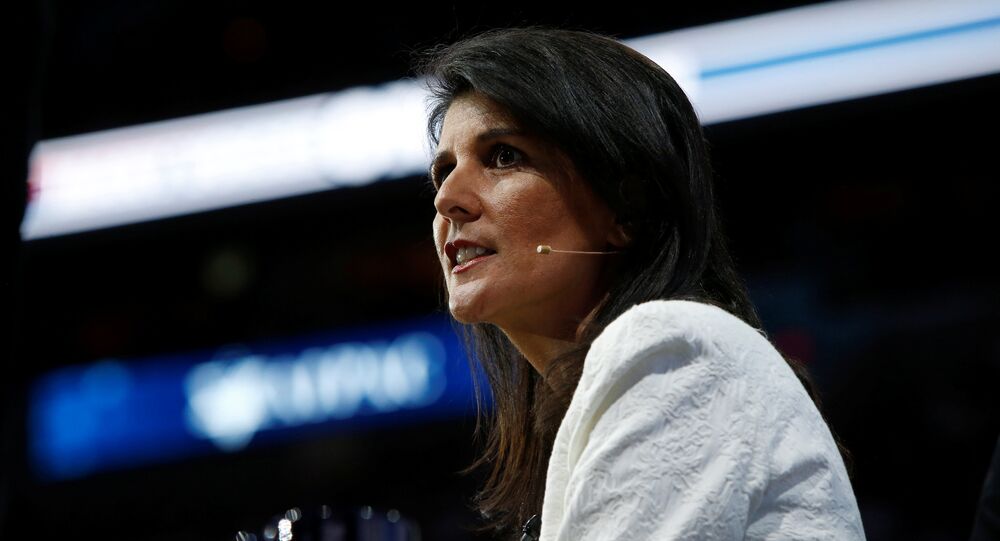 US Ambassador to the United Nations Nikki Haley warned that the US will be “taking names” when the UN General Assembly would vote on recognition of Jerusalem as Israel’s capital.

"At the UN we're always asked to do more & give more. So, when we make a decision, at the will of the American ppl, abt where to locate OUR embassy, we don't expect those we've helped to target us," the Ambassador wrote in her Twitter account Tuesday.

"On Thurs there'll be a vote criticizing our choice. The US will be taking names," she added.

At the UN we're always asked to do more & give more. So, when we make a decision, at the will of the American ppl, abt where to locate OUR embassy, we don't expect those we've helped to target us. On Thurs there'll be a vote criticizing our choice. The US will be taking names. pic.twitter.com/ZsusB8Hqt4

© REUTERS / Khaled Abdullah
Activist: Nikki Haley’s Missile Stunt an ‘Incredible Distraction’ From US, Saudi Horrors in Yemen
The United Nations General Assembly is set to have an emergency session later this week in the wake of US President Donald Trump's decision to unilaterally recognize Jerusalem as Israel's capital.

It is expected that the Assembly will vote in favor of resolution that will call on US to reverse the move, the Hill reports.

The vote of the General Assembly comes just days after the US unilaterally vetoed the United Nations Security Council resolution that condemned the Washington's move on Jerusalem.

Ambassador Haley, who defended the veto on Monday, said that the Security Council's unequivocal condemnation of the move was an "insult" to US sovereignty.

"What we witnessed here in the Security Council is an insult," she said. "It won't be forgotten."

While the US has the veto power in the UN Security Council, it does not have such power in the General Assembly. However, the Assembly resolution will not be legally binding.

As the Hill points out, the Haley already used the very same warning about "taking names" shortly after she took office as UN Ambassador.

"There is a new US-UN," she said during her first speech at UN headquarters in January. "We talked to the staff yesterday and you are gonna see a change in the way we do business."

"For those who don't have our back, we're taking names. We will make points to respond to that accordingly," she added at the time.