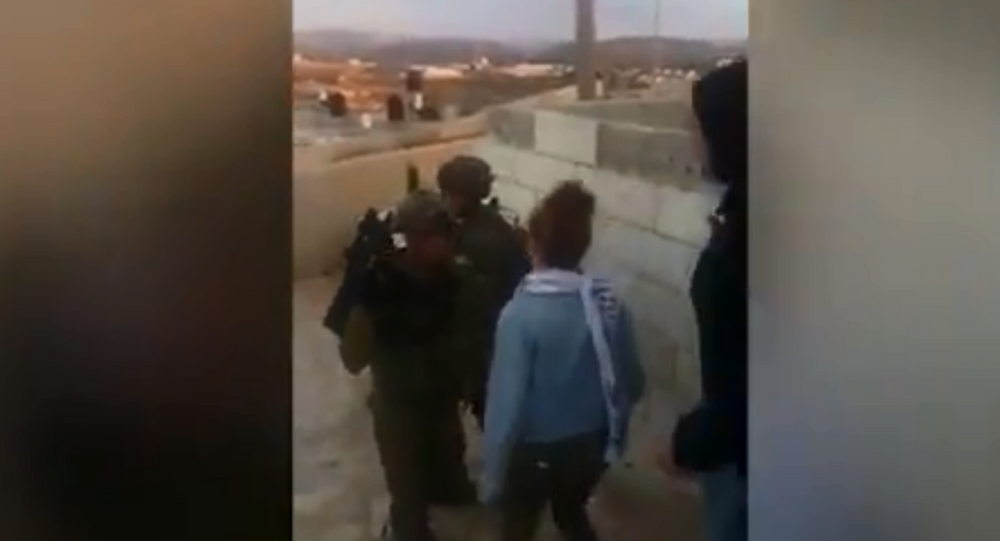 The arrest warrant, which was carried out by soldiers from the Israel Defense Forces (IDF) and Border Police, stated that the girl was arrested for taking part in violent riots in the village, the Times of Israel reported, citing a statement from the IDF. The riot reportedly involved roughly 200 Palestinians throwing stones at Israeli soldiers.

"A large Israeli force raided our house at dawn and arrested Ahed while she was sleeping in her bed," Basem Tamimi, Ahed's father, told the Anadolu Agency. "My daughter was handcuffed and taken into an unknown destination."

​Speaking to the Jerusalem Post, Tamimi's father told the outlet that soldiers had also "beaten his family," in addition to officials arresting the teen and confiscating cell phones, laptops and cameras from the home.

Tamimi, who has been nicknamed "Shirley Temper" for her blonde curls and fearless stance against the Israeli occupation of Palestinian territory, was last reported as being questioned by Shin Bet, Israel's internal security service.

​The footage that ultimately led to Tamimi's arrest shows her flanked by two other teens yelling at, hitting and later slapping two Israeli soldiers. As the teens repeatedly made advances on the soldiers, the two service members did not push back.

Though the video has been hailed by Tamimi's supporters as a brave act in the struggle of the Palestinian people, the viral video has also been used by pro-Israel voices who instead saw the clash as a display of "IDF restraint and professionalism," the Post reported.

"This is what Israeli soldiers have to go through," The Israel Project captioned the footage. "Palestinian women caught hitting, pushing and cursing Israeli soldiers in order to provoke them to respond on camera."

"The soldiers didn't respond," it added.

Since news broke of Tamimi's arrest, netizens have reacted and launched a social media campaign under the hashtag, #FreeAhedTamimi, in the hopes of pressuring Israeli officials to release her from custody.

​The Tamimi family made headlines in 2012, when "Shirley Temper" was filmed shaking her fist and stamping her feet at an Israeli soldier following the arrest of her brother, the Daily Sabah reported. Tamimi was later given the Hanzala Courage Award by Recep Tayyip Erdogan, at the time Turkey's prime minister.