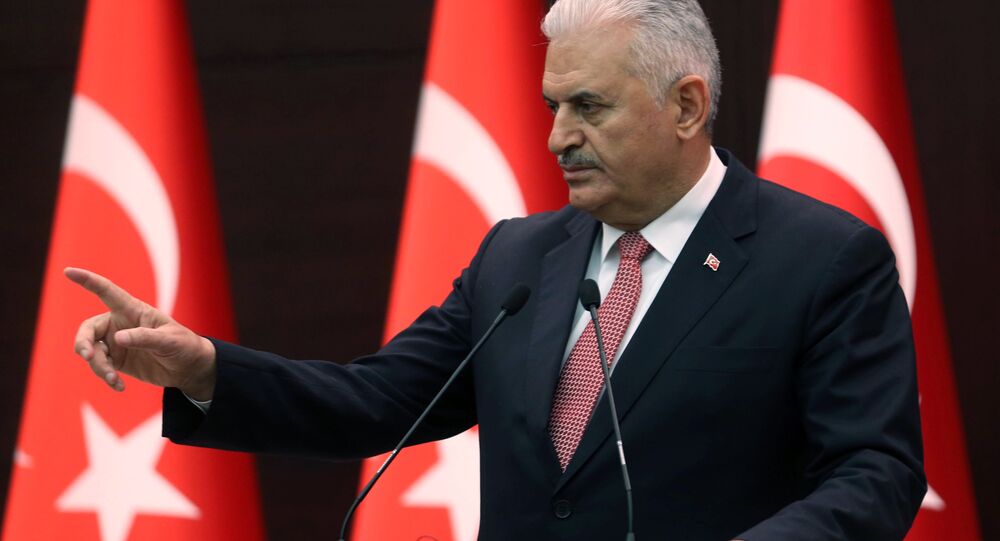 Turkish Prime Minister Binali Yildirim on Saturday repeated Ankara’s commitment to support Palestine amid the political crisis sparked by the US decision to recognize Jerusalem as the capital of Israel.

MOSCOW (Sputnik) — On Wednesday, representatives of 57 Muslim countries gathered in Istanbul for an extraordinary Organization of Islamic Cooperation (OIC) summit on the issue of Washington's decision on Jerusalem. In its declaration, the OIC recognized East Jerusalem as the capital of the State of Palestine.

“There is no country besides Turkey which has opened a mission for Palestine at the embassy level … We have supported Palestine and Jerusalem on all international platforms and we will continue to do so,” Turkish Prime Minister Binali Yildirim said, speaking at the event of the ruling Justice and Development (AK) Party, as quoted by the Anadolu news agency.

© AP Photo / Ariel Schalit
Grinch in Chief: Nazareth Cancels Christmas Over Trump’s Jerusalem Gambit
On December 6, US President Donald Trump announced his decision to recognize Jerusalem as Israel's capital and instructed the US State Department to launch the process of moving the US Embassy, which is currently located in Tel Aviv, to Jerusalem. The step has prompted criticism from a number of states, first and foremost Middle Eastern states and Palestine and triggered a wave of protests in the region.

Turkey's President Recep Tayyip Erdogan on Friday signaled his readiness to appeal to the UN in a bid to try to cancel Washington's decision to recognize Jerusalem as the capital of Israel, according to the Turkish news agency Anadolu.

Speaking to participants at a rally to support the Palestinian Authority in a video message, Erdogan said that Turkey first plans to turn to the UN Security Council (UNSC) and that if any permanent UNSC member country takes advantage of its veto power, Ankara will put the issue on the UN General Assembly's table.

© REUTERS / Osman Orsal
Demonstrators set U.S. and Israeli flags on fire during a protest against U.S. President Donald Trump's recognition of Jerusalem as Israel's capital, in Istanbul, Turkey December 10, 2017
Israel considers Jerusalem as its capital, including the eastern districts of the city, which the Israelis seized from Jordan during the Six-Day War in 1967. The international community does not recognize the annexation of East Jerusalem and believes that the status of the city should be determined based on an agreement with the Palestinians, which claim the eastern part of Jerusalem.
...
Reddit
Google+
Blogger
Pinterest
StumbleUpon
Telegram
WhatsApp
172
Topic:
Trump Recognizes Jerusalem as Israeli Capital: Consequences (91)