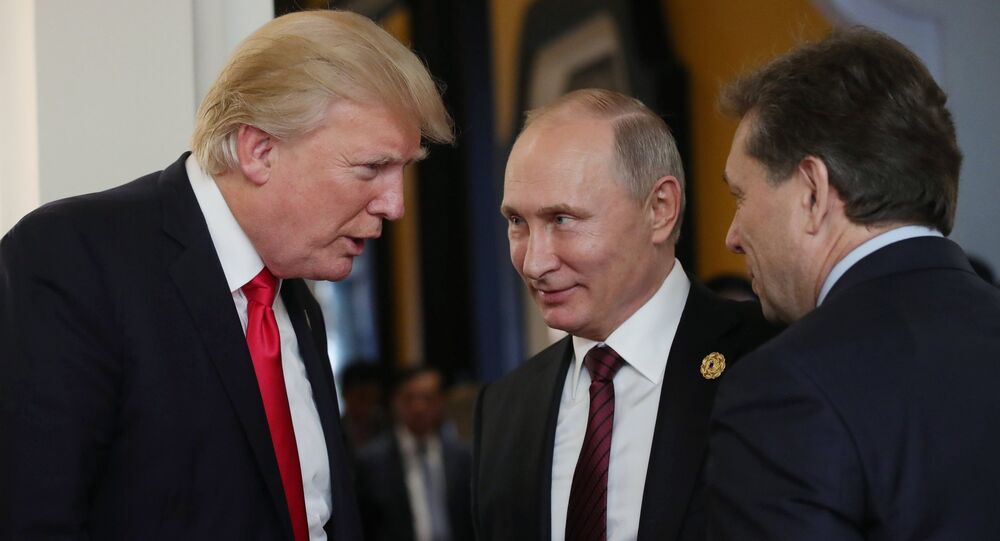 WASHINGTON (Sputnik) — In his annual press conference on Thursday, Putin commented that US President Donald Trump was unable to fulfill promises that he has made during the election campaign, including those related to Russia, because of limitations within the United States.

Retired Canadian diplomat Patrick Armstrong said these problems included the paranoid atmosphere permeating US political debate in which continued false and wild accusations were being thrown at Trump alleging that he colluded secretly with the Russian government or that he is in Moscow’s pocket.

"The United States is in a period of, to echo [US political historian] Richard Hofstadter, ‘paranoid style’ in which the most ridiculous things are said about Russia and Putin. This makes discussion difficult," Armstrong said.

US politicians and policymakers were also disoriented by the massive federal debt and balance of payments deficits facing the United States and by its continuing involvement in a series of expensive, unwinnable and unending wars around the world, Armstrong pointed out.

"The United States is going through a period of self-doubt in which even establishment publications can wonder whether America is a failing state. This leads to — to put it mildly — a complex mingling of emotions. This makes discussion difficult," he said.

© Sputnik / Vitaliy Timkiv
US to Continue Deconflict With Russia After F-22A, Su-25 Incident in Syria
Far from seeking to pull political strings in Washington, Putin consistently and scrupulously followed a policy of avoiding any embroilment whatsoever in domestic US political quarrels and he remained focused on trying to conduct serious business with every US administration, Armstrong explained.

"Putin said what he always says. The American choice of president is not his business and he wishes to work together with Washington on various international issues. That is the hope, what is the reality?" he said.

The insistence of US administrations and members of Congress that only American values were legitimate and had be to imposed on every country and problem in the world also made conducting rational diplomatic negotiations with Washington extremely difficult, Armstrong acknowledged.

"Washington is moralistic: [From the US perspective] certain countries are morally deficient and not worthy of talks. This makes discussion difficult," he said.

By contrast, the Russian government had a far more open-minded and practical understanding of the workings of diplomacy and international cooperation, Armstrong observed.

"Russia practices diplomacy; a large part of diplomacy is talking; Russia is open for more of it with anybody," he said.

Russia’s president and top policymakers focused carefully on advancing their country’s national interests, but the US government instead was heavily influenced by many pressure groups, including immigrant communities and lobbyists on behalf of allies, Armstrong pointed out.

© Sputnik / Michael Klimentyev
Analysts: Russia Saved Syria From Disintegration Instigated by US
"Putin and his team have a very clear and distinct idea of Russia's national interests. However, US administrations are often captured by emigres with an axe to grind or lobbyists for foreign interests [and] often wrapped up in high-sounding language. This makes discussion difficult," he said.

Recently released US official documents revealing discussions that surrounded the issue off expanding NATO throughout Central and Eastern Europe confirmed the superficiality and irrationality surrounding many important US policy decisions, Armstrong stated.

"Washington's record of unreliability has just been exposed by the documents about NATO expansion. Not that after Syria, Libya and Ukraine, Moscow needed much reminding. This also makes discussion difficult," he said.

Despite these problems, the Russian government still hoped to be able to launch a new era of steady, systematic and constructive diplomatic discussions with the US government on a wide range of issues, Armstrong emphasized.

"Even so [despite previous problems], Moscow is ready to try," he said.

The views and opinions expressed by Patrick Armstrong are those of the expert, and do not necessarily reflect those of Sputnik.