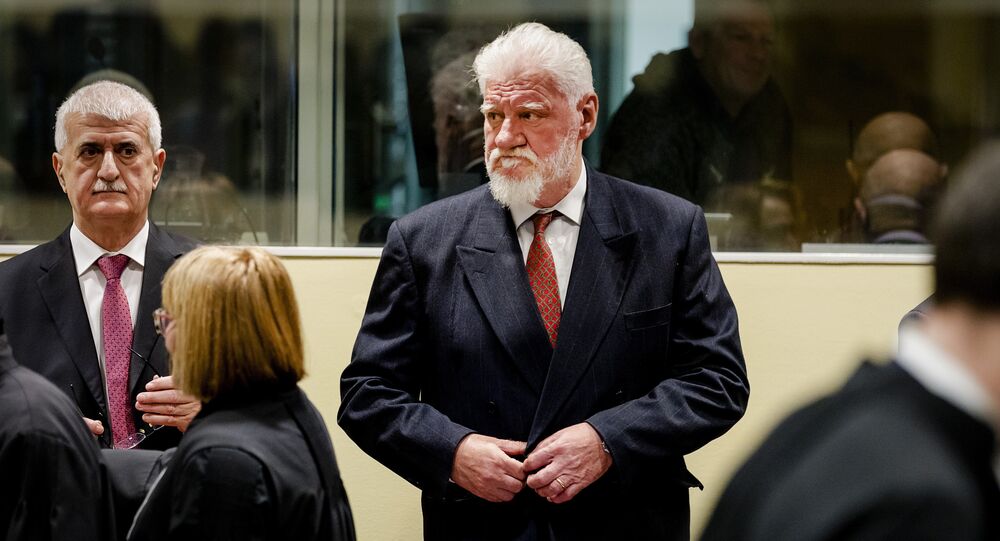 BELGRADE (Sputnik) – The leader of the Serbian Radical Party, who spent over 11 years in the prison of the International Criminal Tribunal for the former Yugoslavia (ICTY), told Sputnik in an interview that former Bosnian Croat wartime commander Gen. Slobodan Praljak could have potentially received poison from the UN prison visitors.

On November 29, Praljak, on trial for war crimes and crimes against humanity, died in The Hague after drinking what he claimed to be poison, shortly after the panel confirmed upholding his sentence of 20 years in prison.

In 2013, Praljak was sentenced to 20 years of imprisonment for war crimes and crimes against humanity. In particular, the court established that the general and his associates had attempted to expel Muslims from the Croatian Republic of Herzeg-Bosnia, an unrecognized geopolitical entity that existed in Bosnia and Herzegovina in the early 1990s, in order to establish an ethnically pure Croat state. These actions were accompanied by murders, torture, sexual abuse and other crimes.

Vojislav Seselj, the leader of the Serbian Radical Party (SRS) said that Belgrade should strengthen ties with Moscow.

"I think that he should apply for Serbia's membership in the CSTO and to start closer integration with Russia, to join all the integration processes, in which Russia is participating. It is also necessary to provide a diplomatic status to the staff of the [Russian-Serbian] Humanitarian Center in [the city of] Nis and to ask Russia to establish a permanent base on the Serbian territory for its protection," Seselj said.

The Serbian official added that Belgrade would like to have as close ties with Moscow as Minsk has, or even closer.

On Monday, Serbian President Aleksandar Vucic will start his three-day visit to Russia. According to Seselj, the visit could be used to strengthen bilateral ties.

The countries are also developing economic, defense and diplomatic cooperation.

According to a parliamentary resolution in 2007, Serbia remains neutral regarding military alliances.

On May 15, 1992, in Tashkent, the heads of six CIS states — Russia, Armenia, Kazakhstan, Kyrgyzstan, Tajikistan and Uzbekistan — signed the Collective Security Treaty. In September 1993 Azerbaijan, Georgia and Belarus joined the CSTO.

"He was always unable to participate in the judicial proceedings. However, it was possible to speak to him, despite the fact that he was losing attention too fast, that's why it was difficult for him to keep in touch with the process… His health conditions were poor, and his lawyers had made a mistake by not focusing on this fact from the very beginning," Vojislav Seselj said.

On November 22, the ICTY sentenced Mladic to life imprisonment on 10 counts.

Mladic's trial started in May 2012. Mladic is accused of genocide, war crimes and crimes against humanity during the 1992-1995 Bosnian war, when he served as the Chief of Staff of the Army of Republika Srpska. After the conflict, Mladic went into hiding, but was arrested in May 2011 and extradited to The Hague.