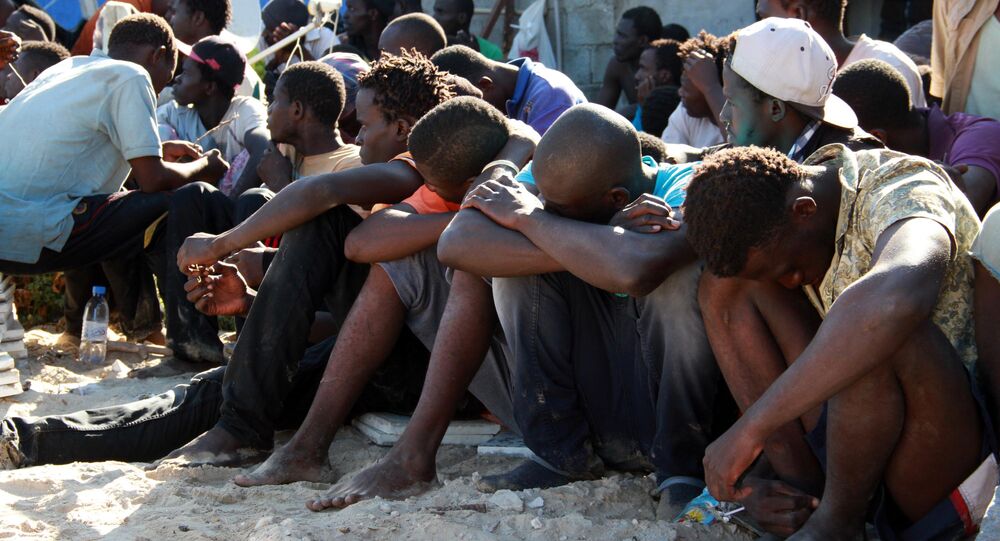 Nearly 20,000 migrants remain in migrant detention centers in Libya, where they are subjected to torture, forced labor, extortion and other forms of abuse, according to a report by the human rights watchdog.

Amnesty International has accused European governments of being "complicit in the torture and abuse of tens of thousands of refugees and migrants detained by Libyan immigration authorities" amid growing concerns about the migrant situation in the African country.

The allegations were presented in Amnesty International’s report "Libya’s dark web of collusion," which details how European governments are actively supporting a "system of abuse and exploitation of refugees and migrants" in Libya.

"Hundreds of thousands of refugees and migrants trapped in Libya are at the mercy of Libyan authorities, militias, armed groups and smugglers often working seamlessly together for financial gain. Tens of thousands are kept indefinitely in overcrowded detention centers where they are subjected to systematic abuse," John Dalhuisen, Amnesty International’s Europe Director, said.

"By actively supporting the Libyan authorities in stopping sea crossings and containing people in Libya, they are complicit in these abuses," he added.

This is the real face of the horrific EU deal with #Libya → https://t.co/f1wZlQouoX pic.twitter.com/76pnAtwQfi

​Since late 2016, the EU has been working with the Libyan government to help deal with the migrant influx, including by providing funds and training to the Libyan coastguard. However, according to the report, the coastguard is working with criminal gangs and smugglers.

According to Amnesty International, some 20,000 people currently remain in Libyan detention centers, where "they endure horrific treatment."

"By supporting Libyan authorities in trapping people in Libya, without requiring the Libyan authorities to tackle the endemic abuse of refugees and migrants or to even recognize that refugees exist, European governments have shown where their true priorities lie: namely the closure of the central Mediterranean route, with scant regard to the suffering caused," Dalhuisen said, stressing that the EU must rethink its cooperation with Libya and enable migrants to reach Europe via legal routes.

Europe adopted its controversial 10-point action plan in 2015. It has called for the EU to financially and geographically reinforce its joint operations in the Mediterranean, including additional measures against smugglers and improving asylum application processing. The plan also stipulates migrant fingerprinting, emergency relocating mechanisms, as well as cooperating with the so-called "Libyan authorities."

© REUTERS / Marina Militare
Dozens of Migrants Die in Shipwreck Near Libyan Coast - Reports
Libya plunged into civil war in 2011 after its longtime leader Muammar Gaddafi was toppled and murdered in an uprising. The country is currently divided into multiple parts, de facto not existing as a unified state.

International efforts to resolve the six-year-long conflict have resulted in the establishment of the Tripoli-based Government of National Accord (GNA) led by Fayez Sarraj, who assumed the position of prime minister of the GNA in March 2016. It has so far failed to extend control beyond the city.

A vast part of Libya is being controlled by the elected parliament, supported by the Libyan National Army (LNA), based in the city of Tobruk. The head of the LNA, officer Khalifa Haftar, does not recognize the authority of the UN-backed government.

Besides the two major forces, there are numerous non-aligned tribes and armed groups. Some observers believe that the return of Saif al-Islam Gaddafi, the son of Muammar Gaddafi, may help break the stalemate.