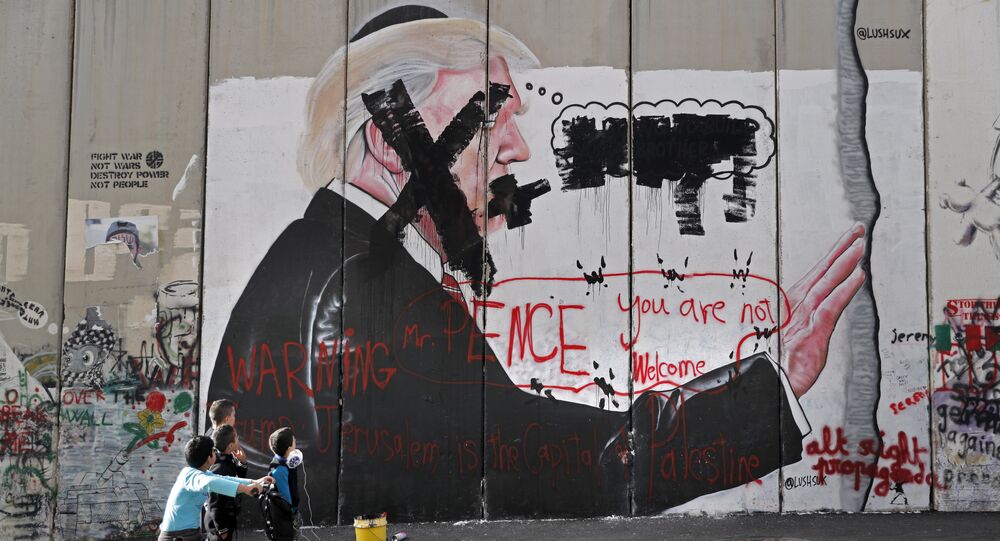 US President Donald Trump’s decision on Jerusalem has faced outrage in the Muslim world and sparked international criticism as a threat to the peace process in the Middle East.

Iran Calls for Response to US

Iranian President Hassan Rouhani has criticized the move by US President Donald Trump recognizing Jerusalem as Israel’s capital, calling it a "plan" against Palestine and the Muslim world, according to Press TV.

"The Islamic Republic of Iran strongly condemns this US move," Rouhani said Monday in a phone call with Ismail Haniyeh, the leader of Palestine’s Hamas movement.

Rouhani said that the "incorrect" move by the US and Israel has demonstrated that they "do not want to officially recognize the Palestinian people's rights."

The Iranian president also called on all movements in Palestine to respond to Tel Aviv and Washington.

Haniyeh, in turn, said that Trump’s decision was a blatant violation of rights of all Muslims, adding that Palestine would never allow Israel and the US to implement their plan.

Hezbollah Calls to Isolate US, Israel

© AFP 2021 / Ahmad GHARABLI
Trump's Jerusalem Statement Already 'Deepening Tension and Igniting Anger'
Addressing the nation, the leader of Lebanon’s Hezbollah movement on Monday called to isolate the US and Israel in response to the Jerusalem decision.

Sayyed Hassan Nasrallah pointed out the negative international reaction to Trump’s move, saying as a result of these reactions Washington has become even more isolated among other nations.

He called on all Arab countries, first of all Palestine, to stand up to Trump’s decision on the status of Jerusalem.

"The whole nation must stand up in the face of this American threat," he said, as quoted by PressTV.

Nasrallah also said that one of the most powerful responses to Trump’s decision would be isolating Israel.

"We must put pressure on the Arab and Islamic states to repeal peace treaties and other deals with Israel. I call on Palestinians to kick out any delegation that aims to visit them from countries that have normalized relations with Israel, no matter what the background of those delegations is," he said.

On Wednesday, Trump declared Jerusalem the capital of the Israeli state and announced the US would start moving its embassy from Tel Aviv to Jerusalem. The move has faced backlash in Muslim countries and sparked international criticism.

On Thursday, the Hamas leader called for a new "intifada" in response to Trump’s decision and urged Arab countries to suspend cooperation with the US.