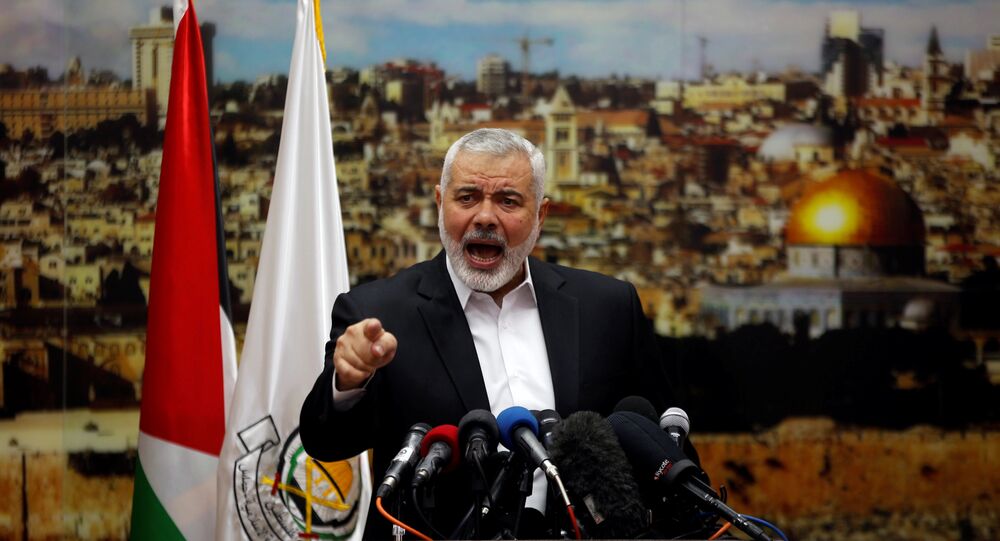 The statement appeared following US President Donald Trump's decision to reconsider the status of Jerusalem and to begin preparations for the transfer of the US Embassy from Tel Aviv.

"We should call for and we should work on launching an intifada in the face of the Zionist enemy," Hamas leader Ismail Haniyeh said in a speech in Gaza.

Haniyeh urged Arab countries to halt all cooperation with the United States, claiming that President Trump will come to regret his decision on the status of Jerusalem.

He also added that the movement does not recognize the city as Israeli capital, insisting that "united Jerusalem remains the capital of the whole Palestine."

© AP Photo / Khalil Hamra
Palestinian protesters chant angry slogans as one burns a representation of the American flag, during a protest against the U.S. decision to recognize Jerusalem as Israel's capital, in Gaza City Thursday, Dec. 7, 2017

Israeli army has deployed additional forces to the West Bank following Trump's statement and possibly in response to Hamas' declaration.

"Upon the conclusion of the general staff's situation assessment, it was decided that a number of battalions will reinforce in the area of (the West Bank), as well as combat intelligence and territorial defense," the statement issued by the military said.

Meanwhile, Israeli PM Netanyahu has expressed his confidence that "many" nations would follow the US in recognizing Jerusalem as Israeli capital.

"We are in contact with other countries that will recognize similar recognition, and I have no doubt that as soon as the US Embassy moves to Jerusalem and before that, more embassies will also move," the prime minister declared.

The story so far

The city of Jerusalem is claimed by both Israelis and Palestinians as their capital, though the international community doesn't recognize either of these claims and all foreign embassies to Israel are located in Tel Aviv.

© AFP 2020 / Ahmad GHARABLI
Jerusalem Authorities Illuminate Old City Walls With US, Israeli Flags
In 1995 the US Congress passed the Jerusalem Embassy Act that required the country's embassy to be moved from Tel Aviv to Jerusalem, though Presidents Bill Clinton, George W. Bush and Barack Obama opted not to implement the law by consistently claiming the presidential waiver on national security interests.

Trump's move was denounced by prominent political figures from across the world.

UN Secretary General Antonio Guterres said he opposes Trump's decision because Jerusalem "is a final status issue that must be resolved through direct negotiations by two parties."

His concerns were echoed by many heads of state, with Qatar warning that proclaiming Jerusalem as the Israeli capital equals "death sentence" to the peace process in the region.