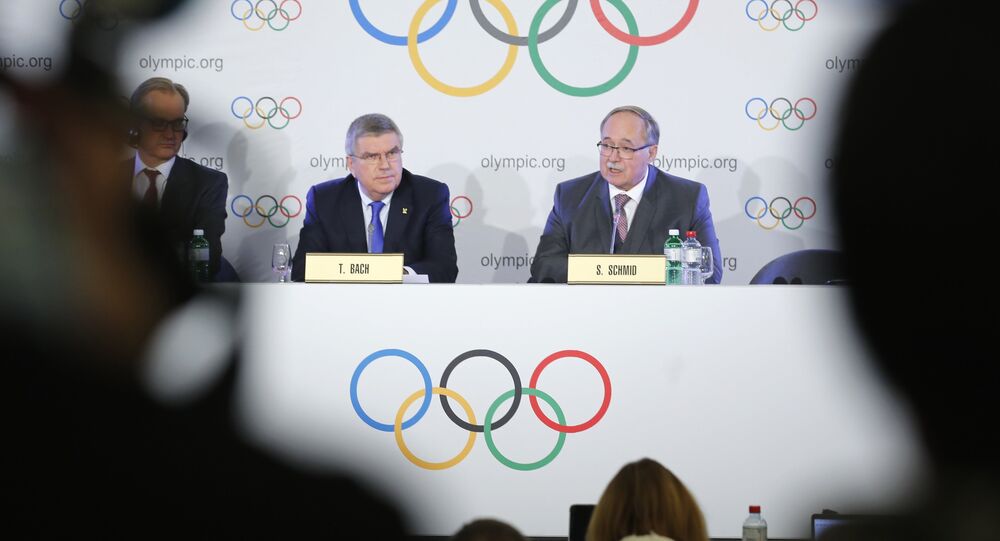 The International Olympic Committee has barred Russia from competing at the 2018 Winter Olympic Games in Pyeongchang, South Korea. Li Longmou, Deputy Director General of the Beijing Hockey Club Kunlun Red Star, has told Sputnik that this is a politically motivated decision.

Li Longmou, Deputy Director General of the Beijing Hockey Club Kunlun Red Star, said that Russia's non-participation in the Pyeongchang Olympics "will lead to a situation where there will be no one to look at in the ice hockey program because the world's two largest professional leagues — the NHL and the KHL — will not compete."

"Undoubtedly, tickets for hockey will not be sold, which will deal a heavy blow to the development of this sport. In addition, this may have a negative impact on the financial aspect of the Winter Olympics in Pyeongchang as a whole," Li added.

According to him, the International Olympic Committee (IOC) was too slow to announce its decision to form a special commission that would select the Russian athletes who will compete under a neutral flag.

"Why was the evidence [of Russian athletes allegedly using performance enhancing substances] presented only now, not in the course of the investigation? Why did the IOC fail to conduct a meticulous probe? I believe that bureaucracy in the International Olympic Committee is going off the scale," he pointed out.

Li echoed the remarks by Russian national ice hockey team forward Ilya Kovalchuk, who earlier said that "Russian hockey players need to go to the Winter Olympics" and that "the IOC's decision [on Russia] is purely political."

"I agree with Kovalchuk saying that Russia must participate. The decision of the IOC does have political undertones, and it can be called a cold war in sports," he emphasized.

At the same time, Li said that "Kunlun players should adhere to the KHL's decision, in line with previous agreements."

"If the KHL declares that it will not take part in the 2018 Winter Olympic Games, we will have to comply with the relevant instructions and we will not send our players to Pyeongchang," he concluded.

Declaring Russia guilty of alleged state-sponsored doping on Tuesday, the IOC announced that the Russian Olympic Committee had been banned from competing in the upcoming Winter Olympics in Pyeongchang, South Korea.

IOC President Thomas Bach, for his part, pointed out that the Russian athletes who will prove they are "clean" can take part in the Winter Olympics under a neutral flag.

Meanwhile, Chinese Foreign Ministry spokesperson Geng Shuang has said that despite the fact that Beijing opposes doping in sports, it advocates for the protection of the rights of doping-free athletes.

"The Chinese government has always been against doping, but at the same time, we believe that the rights and interests of all doping-free athletes should be protected, the transparency and honesty of sports events should be maintained," the spokesperson pointed out.