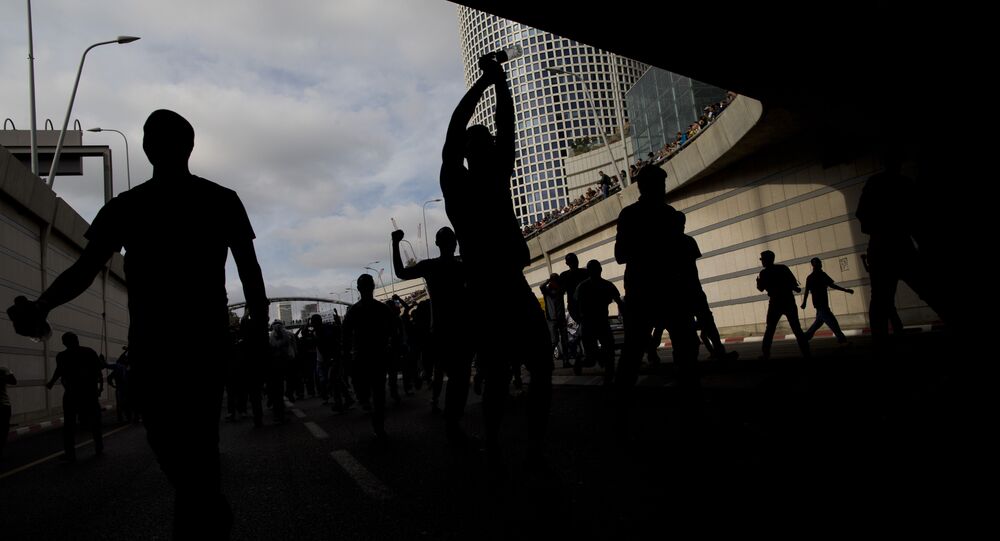 'March of Shame': Tens of Thousands of Israelis Protest Against Gov't Corruption

About 20,000 Israelis on Saturday joined a demonstration in Tel Aviv against government corruption in response to a new legislation being pushed by Prime Minister Netanyahu’s coalition that critics say is aimed at keeping the public in the dark about the investigations.

The demonstration was by far the largest of the weekly gatherings against Benjamin Netanyahu, who is currently being investigated over allegations of corruption and abuse of office, but denies any wrongdoing.

The Israeli police are carrying out two investigations regarding the prime minister: Case 1000, focusing on whether Netanyahu provided anything in return for expensive gifts from businessmen, and Case 2000, an alleged deal between Netanyahu and Yedioth Ahronoth newspaper publisher Arnon Mozes, exchanging reduced critical coverage of the prime minister in return for weakening of a competing newspaper.

​Local media earlier reported that the police were in possession of recorded conversations between the prime minster and the media mogul.

​Saturday's protest was prompted by a draft law coming up for its second reading on Monday, which would prevent Israel's police from publishing their findings in the investigations and issuing recommendations to the prosecutor's office on indictments related to public officials. Netanyahu has said he has no interest in promoting personal legislation but he has not ordered its two sponsors, close confidants in his Likud party, to withdraw the bill.

We went to make a noise to leftists who sit in a cafe, let them feel a bit about what the residents of south Tel Aviv are going through with the illegal residents pic.twitter.com/o3ZEfefM1Z

​Critics believe the bill is a blatant attempt to shield Netanyahu and leave Israelis in the dark about his investigations, while supporters say it would protect suspect's rights.

The protesters marched along Rothschild Boulevard to Habima Square, demanding transparency and accountability in government.

"It's almost like a monarchy here now," said one of the protesters, Hagai Peled, as cited by Jpost. "What's going on with our government is going to silence the voices of everyone here in Israel so that no one can complain or say anything, so we want to protest."

The prime minister has refuted allegations of illegal activities saying that that media reports about his alleged close links to the publisher were designed to mislead the public.

If charged, he would come under heavy pressure to resign or could call an election to test whether he still has a mandate.