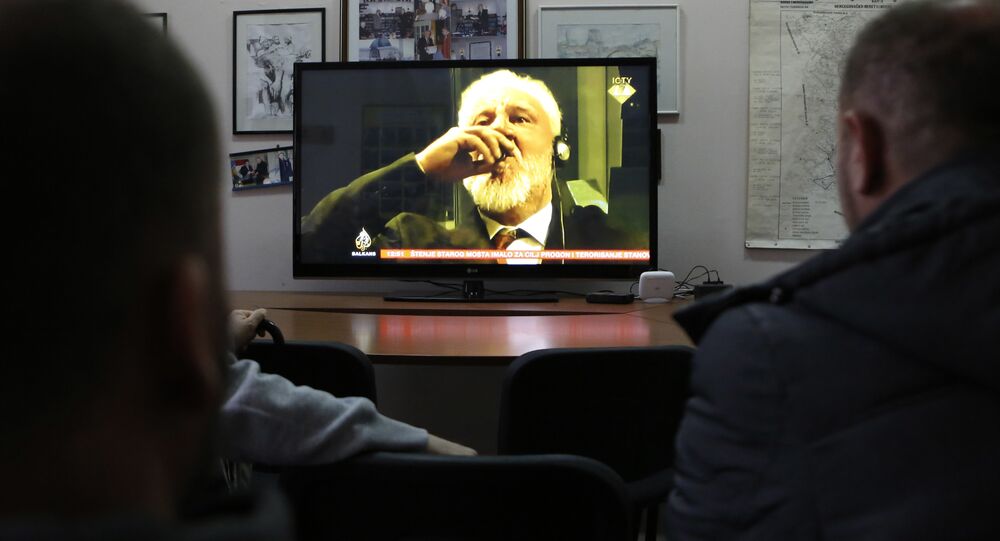 Former Bosnian Croat wartime commander Praljak died after drinking what he claimed to be a poison, shortly after the panel confirmed upholding his 2013 sentence of 20 years in prison.

MOSCOW (Sputnik) — The UN International Criminal Tribunal for the former Yugoslavia (ICTY) said Friday it had initiated an independent review with regard to the death of former Bosnian Croat wartime commander Gen. Slobodan Praljak, which occurred shortly after his verdict was announced by the panel.

"To complement the ongoing Dutch investigation into the passing of Slobodan Praljak, the ICTY Registrar this morning initiated an independent expert review focusing on the ICTY internal operations, in accordance with standard procedures," the tribunal said in a statement, adding that the probe will start next week and a report on its findings is expected by the end of the year.

Praljak, on trial for war crimes and crimes against humanity, died in hospital on Wednesday after drinking what he claimed to be a poison in The Hague, shortly after the panel confirmed upholding his 2013 sentence of 20 years in prison.

READ MORE: Bosnian Croat Commander's Lawyer Has 'No Idea' How He Snuck Poison Into Court

© REUTERS / ICTV
UN Confirms Former Bosnian Croat Commander Dead After Taking Poison in UN Court
The hearing was suspended, with the courtroom being later declared a crime scene, and police conducting an investigation into the incident.

Praljak, who voluntarily enlisted in the Croatian Armed Forces after the beginning of the Croatian War of Independence, was accused, in particular, of expelling and persecuting Bosnian Muslims.

The ex-commander was one of six former Bosnian Croat military leaders convicted for the killings of Bosnian Muslims during the 1992-1995 Bosnian War, with the ICTY sentencing ex-Bosnian Serb commander Ratko Mladic to life in prison for crimes against humanity in last week's controversial ruling.