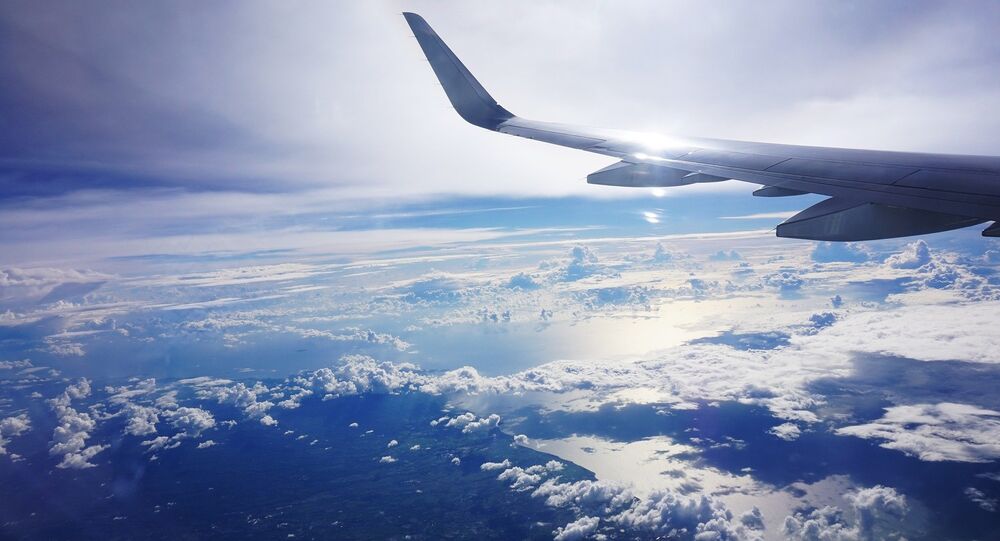 Swiss scientists have discovered a way to produce jet fuel out of air, sunlight and water, which means solar-powered jets could one day seize the sky.

Researchers at the Department of Mechanical and Process Engineering at the Swiss technology institute known as ETH Zurich, Switzerland, have demonstrated the first-ever full process showing how solar thermal energy can be used to make kerosene, the jet fuel used by commercial airlines.

YouTube/Red Bull
James Bond-Style Stunt: Thrill-Seekers in Wingsuits Fly Into a Plane in Mid-Air
The researchers have concentrated 3,000 "suns" of solar thermal energy into a solar reactor at 1,500°C for thermochemical splitting of water and carbon dioxide into hydrogen and carbon monoxide (syngas or synthetic natural gas), the precursor to kerosene and other liquid fuels.

Having performed 295 consecutive cycles in a 4 kW solar reactor to yield 700 standard liters of syngas, the researchers handed the compressed syngas to chemists at the Shell Global Solutions in Amsterdam who used the well-known and established catalytic chemical process called Fischer-Tropsch (FT) synthesis to refine the syngas into kerosene, the fuel that flies jets around the world.

Industrial-scale jet fuel production from solar thermochemical splitting would be wrecking for the fossil fuel industry. Oil and natural gas would no longer be essential elements for transportation fuel production with the unlimited feedstock of sunlight, carbon dioxide and water.

© AFP 2021 / CHRISTOF STACHE
Lufthansa Released Preview of New Throne-Like Business Class Seats
Carbon-neutral air travel is one of the biggest obstacles in a carbon-constrained future. While wheeled traffic can function on electricity or hydrogen as fuel, only flight-quality hydrocarbon fuel refined from crude oil can deliver the engine thrust to lift continental and intercontinental commercial flights.

Aviation is under pressure to respond to the greenhouse consequences of fossil fuel combustion on a prodigal scale — according to a report by the International Council on Clean Transportation (ICCT), if commercial aviation were a country, it would rank seventh in global greenhouse gas emissions, — and the latest experiments offer a solution to the problem.

Phillipp Furler of ETH Zurich presented a report on the successful solar-driven thermochemical splitting of CO2 into separate streams of CO and O2 at the 2017 SolarPACES Conference in September.

"Our long-term vision, and what we are following, is that we will be extracting the CO2 from the atmosphere. This way, we are able to close the carbon cycle and produce CO2-neutral fuels. The technology is expensive, but commercially available." Furler said. "Oil is a limited resource; at some point you will run out. What we propose is another route to the same chemical, using solar energy."