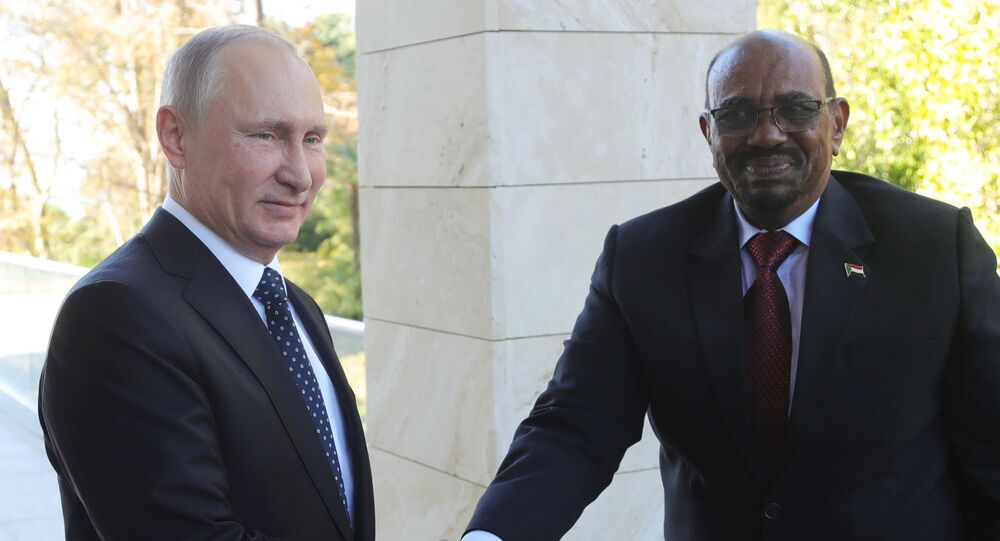 Sudan's President to Putin: 'We Need Protection From US Aggressive Actions'

"In the end, it turned out that our country split into two parts, which resulted in a worsening of the situation, and as a result, we need protection from the aggressive actions of the United States," Sudanese President Omar Bashir said Thursday at a meeting with Russian President Vladimir Putin.

Speaking about the situation in the Red Sea, the president has stated that the US interference is a problem, while it is necessary to discuss the issue from the viewpoint of using bases in the region.

According to the Sudanese president, his country is opposed to US intervention in the domestic affairs of Arab countries, particularly Iraq and Syria.

"We believe that what is happening in Syria is also due to US intervention, and as a result, Syria has such a situation, we believe that peace can not be achieved without [Syrian President] Bashar Assad. We believe that if it were not for Russian intervention in the situation in Syria, then this country would be lost," the Sudanese president explained.

On Defense and Economic Cooperation

Speaking about defense cooperation with Russia, Bashir noted that Sudan wants to strengthen its military attache presence in the country.

"As for defense industry cooperation, we must say that weapons we have both for ground and air forces are Russian-made. We had a very good meeting with the Russian defense minister this morning. We are launching a comprehensive program aimed at re-equipping our armed forces, and we have agreed with [the Russian] defense minister that Russia will assist us in this task."

Russian President Vladimir Putin, in his turn, said that the two countries had good prospects for economic cooperation in various fields, including the energy sector.

"We have good prospects in the economic sector. Regarding the energy sector, there are [prospects in] exploration, production and exchange of resources. There are prospects not only in the hydrocarbon industry, but also in the fields of electricity and development of the peaceful use of nuclear energy. All in all, there is a lot of [potential for] cooperation," Putin said.

Sudanese President Omar Bashir is on his first visit to Russia, describing himself as a “key for Africa."