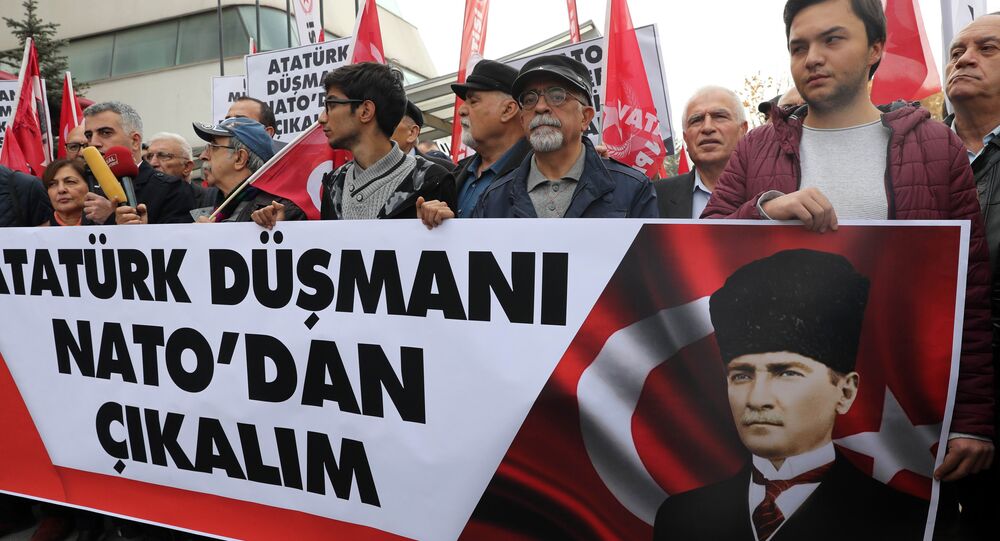 The relations between the military alliance and its member state Turkey have been deteriorating recently with the latest instance of Ankara withdrawing its troops from the military exercises in Norway.

"We do not need an organization that displays in every possible way its hostile attitude towards its member. The issue of our presence in that organization should be urgently considered in the Turkish parliament," the Haberturk television channel quoted Topcu as saying.

Earlier, Turkish President Recep Tayyip Erdogan announced his decision to withdraw 40 Turkish servicemen from the NATO drills in Norway, after his name appeared on an "enemy chart".

"A traitorously hostile tone sounds in regard to our country and the elected president, it is about the meanness and disgrace shown during the NATO exercises, where the photo of Ataturk and Erdogan's name were paired with hostile intentions… It's time to reconsider our membership in NATO. An organization that shows its hostile attitude to its member in every way, " the TV channel quotes Topchu as saying.

NATO Secretary Jens Stoltenberg apologized twice for the insults inflicted on Turkey during the drills in Norway, and the head of the Norwegian Defense Ministry, Frank Bakke-Jensen, expressed regret, he noted that the person who posted the material was a Norwegian civil contractor, not a NATO employee, but Erdogan said that he considers this not enough.

Earlier, Deputy Assistant Secretary of the US Air Force Heidi Grant said that Turkey's acquisition of Russian S-400 anti-aircraft missile systems will deprive it of access to NATO technology and, possibly, lead to the adoption of other measures.

Turkey joined NATO on February 18, 1952, three years after the creation of the alliance. It has provided the alliance with significant numbers of their armed forces: almost all land units and both air armies.