Kurdistan Regional Government (KRG) Foreign Relations Minister Falah Mustafa Bakir has called on the US to get more involved to ensure a ceasefire between the Iraqi government and Erbil is enforced.

"The Minister stressed the need for greater US involvement to ensure that the ceasefire is enforced and disputes are resolved through dialogue," the release said on Friday.

During the meeting, the release said Bakir reiterated the KRG’s call for dialogue on the basis of the Iraqi Constitution and called for a joint security mechanism in the disputed territories. 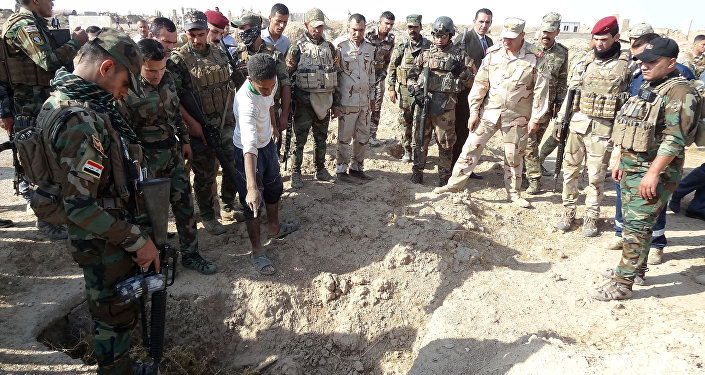 © AFP 2019 / Marwan IBRAHIM
Daesh Turns Former US Base in Iraq Into Gruesome Mass Grave
US Assistant Secretary of Defense for International Security Affairs Robert Karem reaffirmed it would encourage Erbil and Baghdad to settle their differences through diplomatic talks, the release said.

In early November, the Iraqi Kurdish military rejected accusations by Baghdad that it was stalling for time to build defenses against Iraqi forces opposed to the region's independence.

A draft of Iraq's federal budget for 2018 slashes the KRG's share from 17 percent to 12.7 percent of the total, Al Monitor reported on Friday. The move is one of several constitutional measures that have taken place since the Kurdish referendum on independence on September 25, the report added.