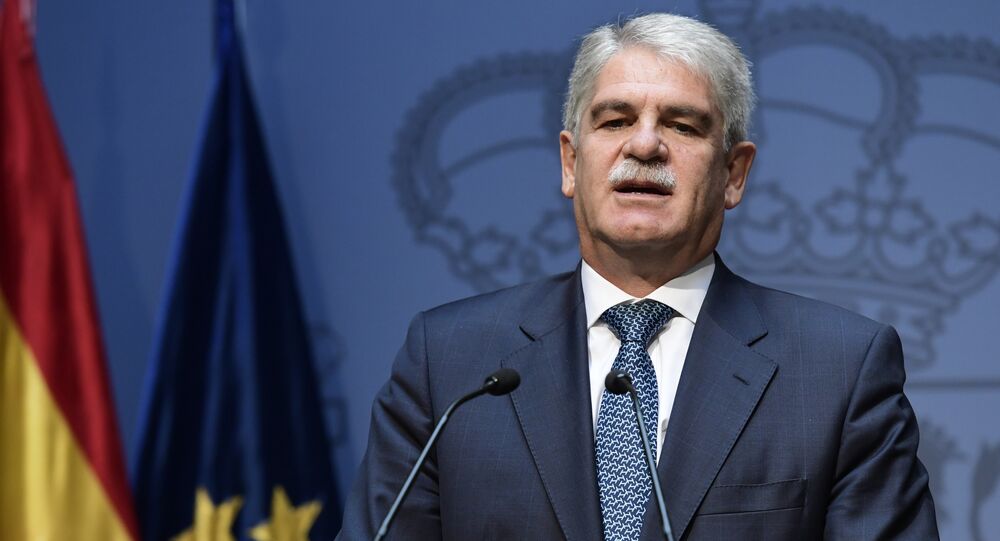 Spanish Foreign Minister Alfonso Dastis said Friday that he believes relations between Spain and Russia will not deteriorate over the media reports of Russia's alleged interference in the crisis in Catalonia and dissemination of biased accounts of events.

MADRID (Sputnik) — Over the past few weeks, a number of Spanish media, including El Pais newspaper, have published articles about allegedly biased coverage of the situation in Catalonia by the Russian media, including RT and Sputnik, and about support of separatists by "Russian hackers." On Friday, the Russian Embassy in Spain criticized Spanish media outlets for spreading rumors about an alleged "Russian hand" in the situation in Catalonia.

"I do not think it can be a beginning of some kind of a crisis," Spanish Foreign Minister Alfonso Dastis said at a press conference on Friday.

Spanish authorities have clearly stated they did not believe that the Russian government had anything to do with social media posts allegedly being spread from its territory or supporting separatists, the minister added.

"We have registered that in the days after the [Catalan independence] referendum of October 1, one could register news or activities in the social media coming from Russia and from Venezuela. But in no way did we say that the Russian government was behind those actions," the minister stressed.

© Sputnik / Javier Luengo
About 150,000 Passengers Affected by Railway Strike in Catalonia
Russian President Vladimir Putin as well as other officials have repeatedly said that Moscow considered the Catalan crisis a Spanish domestic issue that should be settled in accordance with the country’s constitution.

Commenting on the accusations of Moscow's alleged meddling in the internal affairs of Britain and Spain, Russian Foreign Minister Sergei Lavrov said that "we have gotten used to the fact that some of our Western partners have nothing else to do rather than accusing Russian media of meddling in other states' affairs and proclaiming it foreign agents."

"Perhaps this is also due to the fact that in the respective capitals, where such accusations are made, whether Madrid or London, as a rule, there are a lot of unsolved domestic problems. And, probably, such a hot sensational hysteria is being fueled up in order to divert the attention of their voters away from the inability to solve these domestic issues," the minister said.

Kremlin spokesman Dmitry Peskov has also commented on the issue, saying that "neither the authorities [of Spain], nor NATO, nor the newspapers have provided a single, even somewhat worthy argument in favor of the reliability of these allegations."

All for One, One for All: Catalonia's Incredible Gravity-Defying 'Human Towers'