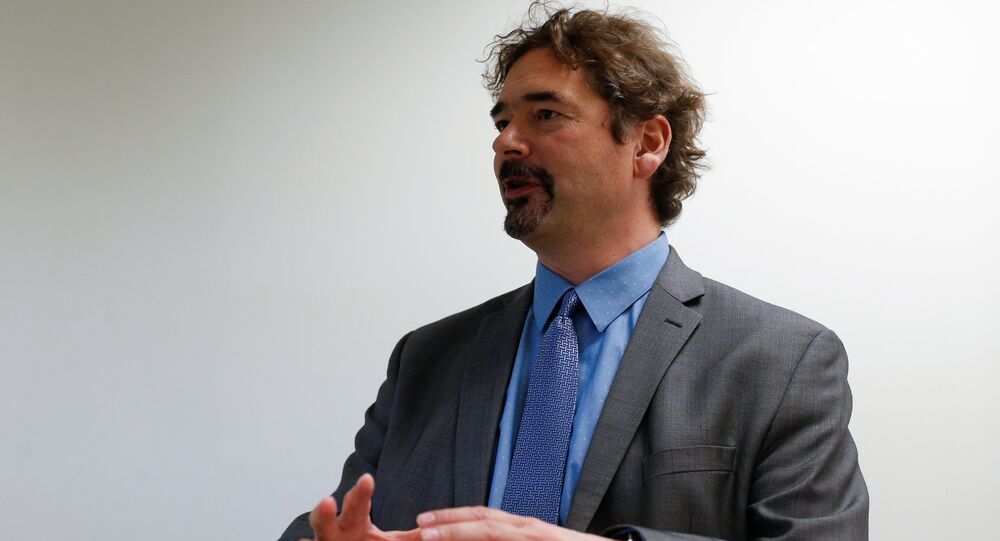 Jon von Tetzchner, co-founder of the companies Opera Software and Vivaldi, commented to Sputnik on the issues of Internet advertising, the encryption of private chats and Twitter's move to block accounts owned by RT and Sputnik.

LONDON (Sputnik) –  Twitter was in the wrong to ban all ads from the broadcaster RT and Sputnik news agency, Jon von Tetzchner told Sputnik. He explained that he read an article about Twitter’s offer to publish more RT ads, adding that this fact "does not place Twitter in a good light given the current situation."

He went on to say that "all ads placed on the Web through these large channels should be visible to the public so that the public can make up their own mind. I would urge RT to make all ads they have published available as a first step there. I think they should make all their ads available in a readable format and so should all of them."

Twitter has said it had decided to block ads from all accounts owned by RT and Sputnik, based on its own investigation into the 2016 presidential election, and the US intelligence community's suggestion that both outlets had attempted to meddle in the vote. Reacting to the ban, Margarita Simonyan, the editor-in-chief of Sputnik and RT, expressed her displeasure with the decision and recalled that Twitter itself had suggest to RT that it spend huge sums on an advertisement campaign during the election.

Russian media, especially RT, have faced intense scrutiny in the United States in recent months. According to the US intelligence community, the broadcaster was involved in the Kremlin's alleged attempts to influence the 2016 election. Russia has repeatedly denied these claims, citing a lack of sufficient evidence. Most recently, the channel was forced to register under the US Foreign Agents Registration Act (FARA).

"I think that what Telegram is saying sounds about right. I believe tech companies should not be putting in backdoors, and a government should not be asking for backdoors — not the US government, not the Russian government. I think we need more security, we need to be able to trust the Internet to work in the way that it should," Tetzchner said in an interview.

The Opera founder also commented on the situation around Telegram messenger, which many authorities have criticized for granting users the opportunity to create secret chats that could be used by terrorists. Every person has a right to privacy, and even though there is a small group of people using the technology for malicious purposes that does not mean that all users should suffer, Tetzchner stressed.

The programmer pointed out, however, that certain commercial companies were "spying" on Internet users on an even larger scale than governments by collecting unreasonable volumes of information.

"If you are using a Google phone and you are using Google Maps, if you go to some place, there will be a notice saying ‘do you want to write a review on this restaurant?’ What does that mean? It means that wherever we go we are being tracked. Obviously, that should not be necessary … There are three questions – is it [information] collected, how it is stored and how it is used? It is not necessary to collect so much information. And make it available for other companies," Tetzchner said.

He noted that the personal information about the user’s actions should not be used for commercial purposes. The programmer stressed that large companies should be prohibited from collecting huge volumes of information to manipulate buyers’ decisions and violate their privacy.

"There are quite a lot of companies who start to look into how they can analyze [buyers’ preferences] based upon what you like, where you go, what kind of person you are and how they can influence you to make purchasing decisions. There were certain ads that were banned … [and] seen as manipulative. Analyzing you psychologically how to put an ad in your face, to make you do something, I think, [should be banned] in the same way," Tetzchner said, adding that it should be both at national and international levels.

When asked whether the information about users should be collected for security purposes, the programmer insisted that not everybody should be surveiled, comparing the excessive collection of information with a reality TV show. He noted that people should answer themselves what society they want to live in, stressing that existing technologies should not be used for excessive surveillance. Tetzchner added that excessive collection of information may, on the other hand, become a security problem, since these data could be obtained by malicious hackers.

The Opera co-founder believes that the procedure of advertising on the Internet should become more transparent.

"If you are willing to pay for it, you can send different [advertising] messages to different people, and, I think, it is reasonable that we should have access to this information … I have been working for the Internet all my life, wanting to get everyone equal access to information. I do not want it to turn into a propaganda war, where there are different sides trying to put things about the others which are not true all the time. That is a very bad trend. There are tools that can be used for bad things."

"We have had the election in the US, where President Trump spent $70 million on Facebook ads … He supposedly sent out 40,000 different ads per day. [As a voter] you would like to know about your politicians, whether they are saying different things to different people. I would like someone to build programs to look into that [ads]. It is actually a good use of big data," he said.

READ MORE: Encryption in the Crosshairs: May and Macron Pledge Joint Anti-Terrorism Battle

Commenting on Russia’s alleged meddling in the US elections via social media, Tetzchner expressed fear that such processes might destroy the initial idea behind the Internet.

"I do not know the details of this … If Russia was involved, I think, it is unfortunate and hope that will stop. Because I would fear that if Russia is doing it – the US does it, and then everybody is doing it – that would be a really bad thing. If this is happening, I hope that we can stop it for the sake of the world before it goes too far … If we are basically destroying a fantastic media by making a battleground of propaganda, that is a very serious problem – and it does not matter who is who in it," the Opera co-founder said.

Moscow has repeatedly denied all the claims of meddling in the US election campaign, saying that the allegations are absurd.