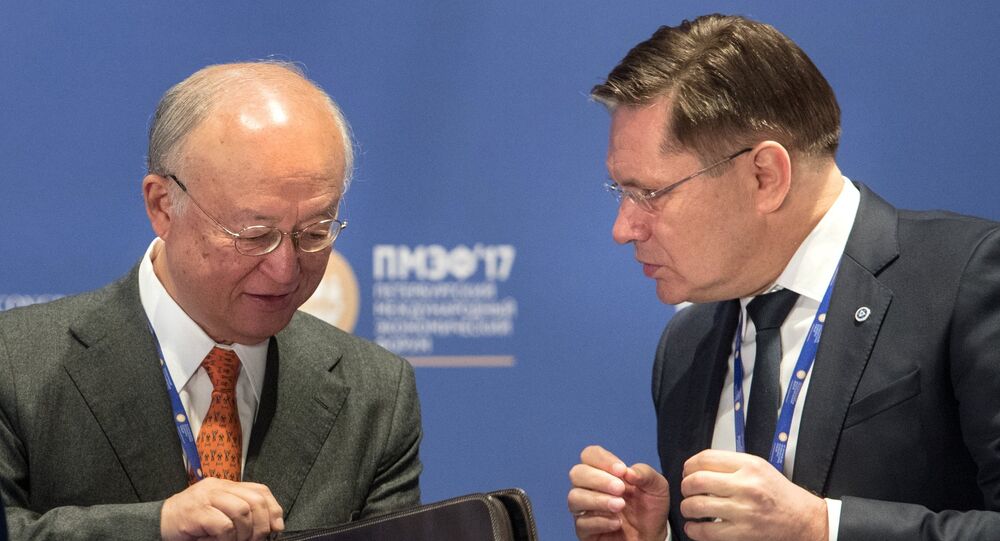 "We have discussed a number of issues and we have good cooperation with Rosatom and IAEA. This [meeting] is part of a continuous dialogue between us. [We discussed issues of] nuclear power, my recent visit to Iran and other items. It’s always nice to meet Mr. Likhachev," Yukiya Amano said on the sidelines of the IAEA-organized ministerial conference on nuclear power in Abu Dhabi, a three-day international ministerial conference aimed at discussing the role of nuclear energy in the 21st century.

Yukiya Amano has confirmed Iran's compliance with its commitments under the nuclear deal, adding that UN inspectors faced no difficulties in their activities.

"The IAEA can state that such nuclear-related commitments are being implemented," Amano told a news conference in Abu Dhabi following a trip to Iran on Sunday where he met with Rouhani and other officials.

"I requested that Iran… fully implement the nuclear-related commitments. This [was] the main thrust of the meeting in Iran… Regarding the activities of our inspectors, they are discharging their responsibilities without any problems," he said.

Amano has informed that had told Iranian officials the nuclear deal was a "significant gain for verification."

However, the Iranian delegation failed to show up at the IAEA-organized ministerial conference on nuclear power which began one day after Amano visited Tehran.

© AP Photo / Evan Vucci
Trump's Desire to Rip Iran Nuclear Deal Up is Not Enough to End It – Analysts
Tehran was supposed to be represented at the event by Atomic Energy Organization of Iran President Ali Akbar Salehi, Nuclear Power Production and Development Co. of Iran, and Iran Nuclear Regulatory Authority.

The development comes weeks after US President Donald Trump announced his administration's decision not to certify Iran's compliance with the deal, also known as the Joint Comprehensive Plan of Action (JCPOA).

Iran's compliance with the nuclear deal was also confirmed by members of the P5+1 group that brokered the historic deal in 2015. Following Donald Trump's statement, Iran said that it "had a developed plan and a certain law," should the United States withdraw from the agreement.

On the Implementation of the Paris Deal

The increased use of nuclear power will be necessary to provide modern states with electricity and comply with the Paris Agreement on climate change, according to Amano.

The Paris climate deal was adopted within the UN Framework Convention on Climate Change in December 2015 and came into force in November 2016. The accord which is focused on the reduction of greenhouse gas emissions has been signed by more than 190 countries and ratified by 169.

Russian top official, Alexei Likhachev, in his turn, said it was necessary to ensure the strict compliance with the principles of nuclear non-proliferation and safety.

© AFP 2020 / ATTA KENARE
Tehran Says Failure of Iran Nuclear Deal Will End Hopes for Non-Proliferation
According to Likhachev, the international nuclear industry had always demonstrated responsible behavior with respect to the principles of safe and the sustainable development in all the fields of the industry.

The international nuclear non-proliferation regime is based on the Treaty on the Non-Proliferation of Nuclear Weapons, signed in 1968 and ratified by 190 states. The treaty aims to prevent the proliferation of nuclear weapons and promote the peaceful use of nuclear energy. The treaty recognizes only China, France, Russia, the United States and the United Kingdom as nuclear-weapon states due to the fact that these countries had carried out nuclear tests and begun developing nuclear industries before January 1, 1967.