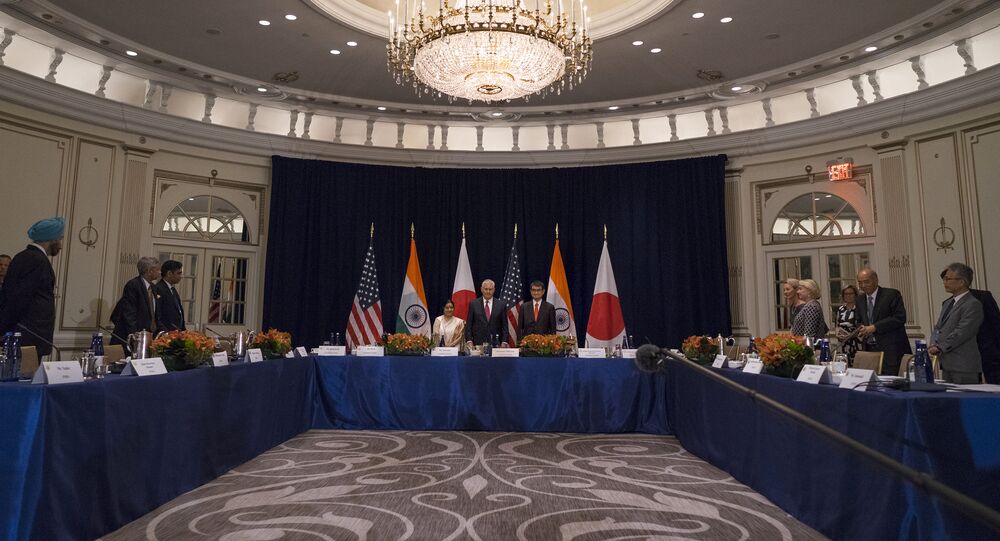 Tokyo is set to propose a strategic dialogue between the leaders of the US, India and Australia, aimed at counteracting China. Foreign policy analysts, however, provided their assessment to Sputnik China as to why the attempt to draw New Delhi and Canberra into a standoff with Beijing has little chance of success.

Japanese Prime Minister Shinzo Abe is going to propose that the leaders of the four countries "promote free trade and defense cooperation across the land and sea to Southeast, South and Central Asia, and beyond to the Middle East and Africa," Japan's Foreign Minister Taro Kono told The Nikkei, a business daily.

The proposal, which will be aimed at counteracting China's One Belt, One Road initiative, is set to be outlined to President Donald Trump during his visit to Japan on November 5-7.

Alexei Fenenko, an associate professor at the World Politics Department of Moscow State University suggested that the idea of the strategic dialogue between the four states resembles an "attempt to breathe new life into Abe's failed  'Quadrilateral Initiative' at an economic and political level."

© REUTERS / Adnan Abidi
India, Japan Agree to Enhance Military Ties and China Does Not Like It
The "Quadrilateral Initiative," an informal strategic dialogue between the US, Japan, Australia and India, which was proposed by the Japanese leader in 2007, was supposed to establish a so-called "Asian Arc of Democracy," and to ultimately include countries in Central Asia, Mongolia, the Korean peninsula, and other countries in Southeast Asia, "virtually all the countries on China’s periphery, except for China itself."

Many analysts at the time noted that the "Arc" suspiciously accurately coincided with the hydrocarbon supply routes from the Persian Gulf into Asia, Sputnik China wrote. Control over these routes is now one of the major aspects of the global game between the leading world powers.

The initiative, however, ceased to exist after Australian Prime Minister Kevin Rudd decided to withdraw over concerns that it threatened the relationship between Australia and China.

Fenenko therefore recalled that this idea was originally set up as a possible alternative to the Shanghai Cooperation Organisation (SCO) and that Japan openly dubbed it as an anti-SCO union of marine powers.

"So, the anti-Chinese strategy could be clearly noticeable in the recent proposal of the Japanese Prime Minister. However the major jeopardy of the new initiative will be to India, as it is an SCO member state and is targeted by Japan to become a part of its new proposal," he told Sputnik.
The expert further opined that Japan's move is aimed at undermining the SCO by reviving the Indian-Chinese standoff using a new platform.

© AFP 2021 / Kazuhiro Nogi
China 'Very Concerned' as Japan's Defense Spending Reaches 'Historical Maximum'
Secondly, he suggested, it is an attempt to weaken the BRICS, as it will increase tensions between two of the groups member countries, India and China, with the latter likely to be supported by Russia.

Thirdly, according to Fenenko, it will strengthen joint Indian-US efforts in Afghanistan, with an evident US' aim to counteract China's growing influence in this country.

Meanwhile, Boris Volkhonsky, head of the Asian desk at the Russian Institute of Strategic Studies (RISS) ruled out that India and Australia could have been drawn into the standoff with China.

"One of the basic principles of India's foreign policy is non-entry into any unions. Moreover, regardless of all its tensions with China, New Delhi quite successfully cooperates with Beijing in a number of regional and global formats," he pointed out to Sputnik.

He further elaborated that China and India are confronting on a bilateral level, while at a regional level this confrontation gets considerably milder and they have almost no discrepancies at a global level, which could be clearly proved by their identical voting in the UN Security Council.

Volkhonsky also ruled out any military-political union against China. Although, he said, all the four countries, the US, India, Australia and Japan, are concerned about China's rise in the region, Canberra, for example, has quite solid economic ties with Beijing, which won't allow it to make any sharp moves against the world's most populous country.

According to the Asian expert, although none of the four countries support China's One Belt, One Road initiative, they won't be able to impede it, and it will eventually become a dominating geostrategic initiative in Eurasia.

© AFP 2021 / ARUN SANKAR
India Seeking Stronger Alliance With US, Japan as Tension With China Escalates
This point of view is echoed by Wang Zhimin, director of the Center for Globalization and Modernization at China's Institute of Foreign Economy and Trade, who also doubted that Japan's proposal could transform into any kind of a union, let alone become an alternative to the Chinese initiative.

He pointed out that out of the four countries, only the US and Japan and the US and Australia are allies, while India has no similar ties with any of them. It stays out of any unions despite the pressure of the US and Japan. Although there is a territorial dispute between India and China and New Delhi is an open opponent of the One Belt, One Road project, especially with respect to the concept of a Chinese-Pakistani economic corridor, China's initiative has already showed itself to be an influential mechanism. The cooperation within its framework is already working in practice, and is bringing tangible results, Wang Zhimin concluded.