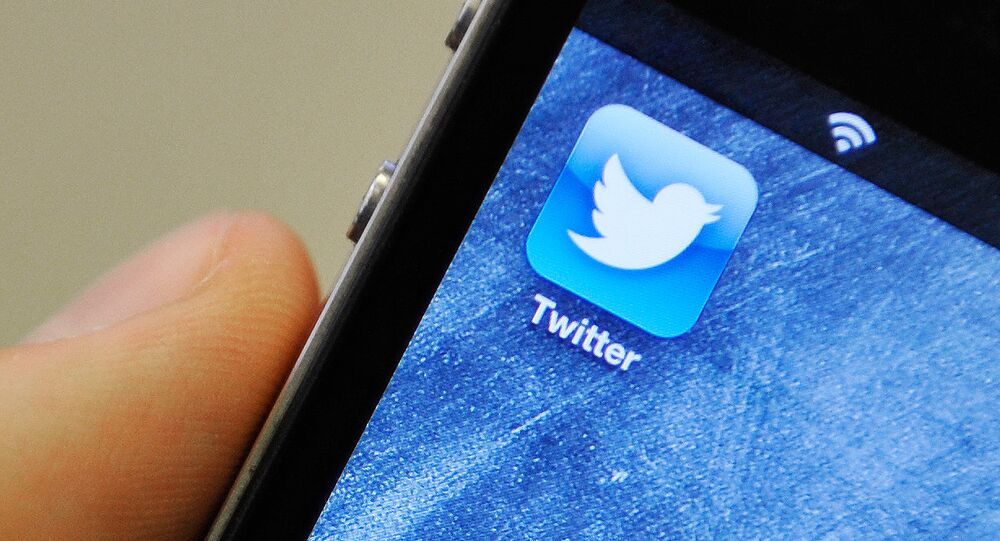 Amid allegations that RT and Sputnik attempted to meddle in the 2016 US presidential election, Twitter has announced it has decided to off-board advertising from all accounts owned by these media outlets after an internal investigation.

WASHINGTON (Sputnik) — Twitter Communications Director Emily Horn has declined Sputnik's request for an interview regarding her company's decision to block advertisements from Sputnik and RT and referred Sputnik to the company’s press release published on Thursday.

Sputnik asked Twitter to explain what kind of influence the company believes RT and Sputnik had on the election campaign and whether Twitter sees any illegal activity by the Russian media outlets.

© AFP 2021 / EMMANUEL DUNAND
Twitter’s Ban on RT, Sputnik Ads: Blatant Example of US Exploiting Internet
Strong anti-Russian sentiments have been growing since 2016 when Donald Trump ascended to the American presidency. His victory was blamed on Russia in order to deflect public attention from actual instances of election fraud and other pressing domestic issues. Russophobic rhetoric was also palpable throughout election campaigns in France and, later, in Germany. However, despite the massive media coverage of the allegations, ample proof is still lacking.

Twitter was also asked how it can reject advertisements from Sputnik if the news agency never paid for any such services on Twitter.

The news agency said in a press release that it had never used paid promotions on Twitter. "Our subscribers are those who are tired of the 'mainstream' and who are looking for an alternative perspective on the news," the press release read.

© Sputnik / Vladimir Pesnya
Russia Will Respond to Twitter's RT, Sputnik Ad Ban - Foreign Ministry
Moreover, Sputnik asked Twitter to comment on the fact that the company itself offered RT the chance to invest more than $3 million in advertising on their platform during the election cycle and then proceeded to block RT advertisements ten months after the offer was turned down.

As the news about the advertising ban came, Margarita Simonyan, RT's editor-in-chief, revealed that Twitter actually pitched the broadcaster on buying election advertisements promising some perks as a customized emoji-hashtag, customized analytics, and a special team to develop a strategy. However, the media outlet rejected the offer because of the excessive price tag and the possibility that the offer would be against RT's interests.

How Twitter offered to “interfere” in US elections. For lots of $$. https://t.co/icV4cLZyT1

Unfortunately, during hearings on the matter, Twitter forgot to inform the US Senate Intelligence Committee about the pitch. Twitter also refused to comment on Simonyan's accusation. "We do not have any comment on our private conversations with any advertiser, even a former advertiser," a Twitter spokesperson told The Hill.

© Sputnik / The Press-service of the Federation Council of the Russian Federation
Senior Russian Lawmaker Deletes Twitter Account After Crackdown on RT, Sputnik
Lastly, Sputnik asked if Twitter expects any changes in business and regulations in Russia after Russian officials stated they will respond to Twitter's actions.

Russian Foreign Ministry spokeswoman Maria Zakharova told Sputnik that Twitter's decision in regards to RT and Sputnik is another act of aggression to impede the work of Russian media, which is a result of a campaign of pressure by the US establishment and intelligence agencies. Zakharova said Russia will take "reciprocal measures."

'Make Them Leave us Alone': Simonyan Welcomes Any Response to US Pressure on RT