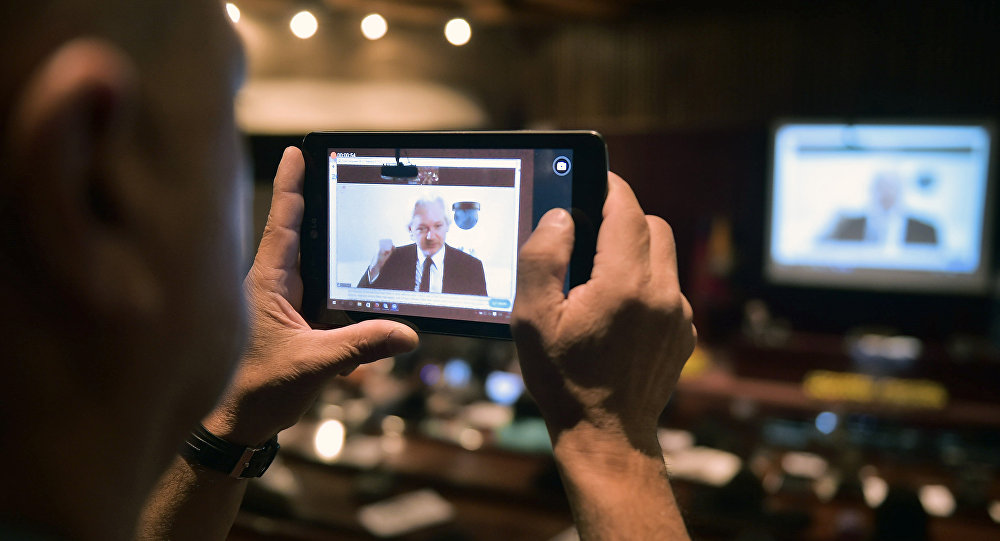 A scandal is brewing over WikiLeaks' alleged role in the defeat of Hillary Clinton in the 2016 US presidential election, as the organization posted over 19,000 emails apparently hacked from the Democratic National Committee as well as those belonging to the former chairman of Clinton's presidential campaign during the election run.

MOSCOW (Sputnik) – Lawyers for US President Donald Trump's election campaign stated in their motion to dismiss a lawsuit on collusion with WikiLeaks that the whistle-blowing organization's publication of emails apparently hacked from the Democratic National Committee (DNC) was legal, WikiLeaks said Thursday.

Trump campaign just made an important, and correct, admission. All WikiLeaks' publications are protected by US law. https://t.co/MSfSobrqVK

Trump's lawyers noted in their court filing that WikiLeaks merely provided a platform for a third party to publish content and, furthermore, had the right to publish information that was of a "legitimate public interest."

The news comes following a report in the US media that data-mining firm Cambridge Analytica, which worked with Trump's presidential campaign, had contacted WikiLeaks founder Julian Assange about the possible publication of then-Democratic Party nominee Hillary Clinton.

Julian Assange confirmed that Cambridge Analytica had applied to WikiLeaks:

I can confirm an approach by Cambridge Analytica [prior to November last year] and can confirm that it was rejected by WikiLeaks.

We have confirmed the approach and rejection only. Not the subject. https://t.co/UOLY62tDY5

Former DNC staffer Scott Comer and party donors Roy Cockrum and Eric Schoenberg filed a federal complaint on privacy invasion, suggesting that Trump's campaign was involved in a conspiracy with WikiLeaks with the intention of publishing the emails, some of which were private and contained personal information.

A number of US intelligence agencies have concluded that Russian agents may have delivered the emails to WikiLeaks, but did not provide evidence to support such claims. Moscow, facing a barrage of accusations from US officials, the intelligence community, and media, has repeatedly stated that it did not interfere in the US election.

WikiLeaks Founder Stresses Inviolability of Russian Diplomatic Properties in US