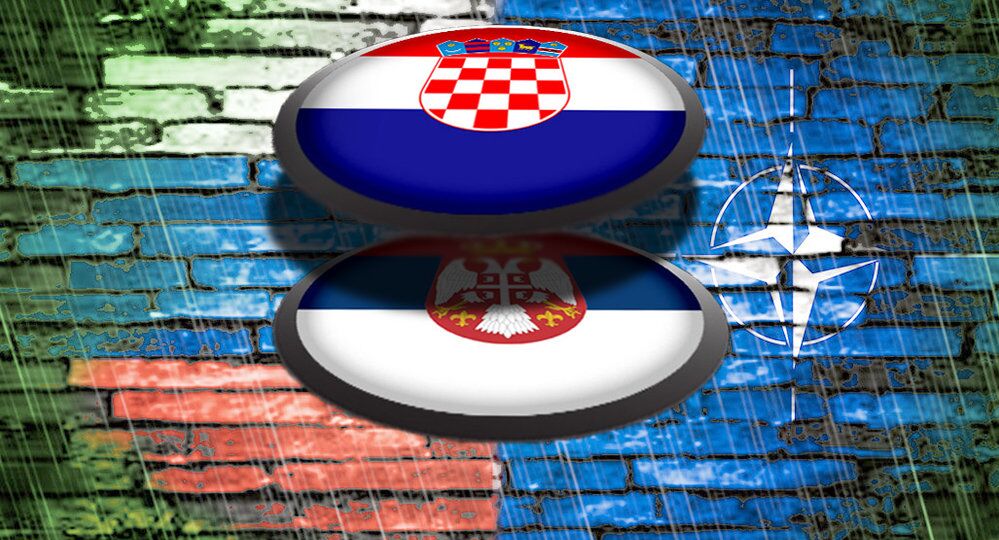 What are the Odds of Croatia Mediating Between Russia, the EU and NATO?

Croatian President Kolinda Grabar-Kitarovic has just wrapped up her three-day visit to Russia, where she pledged that Zagreb might help Moscow, NATO and the EU put their relations back on track. Serbian and Russian political analysts offered Sputnik their opinions on the issue, saying that Serbia has far more chances to become such a platform.

At the joint news conference with President Putin after their meeting in Sochi on Wednesday, Croatia's head of state emphasized that her country "is a member of the European Union and NATO, which respects the international importance of Russia and therefore seeks to give a new impetus" to bilateral relations.

Just before the trip, Kolinda Grabar-Kitarovic said that Croatia can become a mediator between Moscow and the aforementioned blocs as it is "still impossible to address many issues on the global stage without Russia."

© AFP 2020 / FREDERICK FLORIN
Croatia's Losses Due to Anti-Russia Sanctions Estimated at $334Mln - Ambassador
Serbian political analyst Dragomir Andjelkovic, however, explained to Sputnik Serbia how Croatia's membership in the EU and the North Atlantic alliance can play against the initiative.

"There could be a simple conflict of interests, and it is hard to expect that Zagreb could [then] become an objective mediator," he said.

There is a free trade agreement between Russia and Serbia; the two countries are also involved in military cooperation, which involves not only regular military drills but the supplying of Russian weaponry to the country on preferable terms. On Friday, Serbia demonstrated six MiG-29 fighter jets it got from Russia for free and will only pay for their overhaul and modernization.

© Sputnik / Evgeny Biyatov
US House Passes Measure Requiring Reports on Russia-Serbia Military Cooperation
Dragomir Andjelkovic also recalled that unlike Croatia, which has introduced and supported anti-Russian sanctions, Serbia refuses to resort to punitive measures and has been repeatedly criticized for it by the West.

"If Moscow agrees that a NATO member state may become a mediator between it and the West, it would signal to countries like Serbia that it makes absolutely no sense to remain neutral," the political analyst concluded.

In a separate comment on the issue, Irina Rudneva, a senior expert with the Center for the Study of Modern Balkan Crisis at the Institute of Slavic Studies in Moscow, provided Sputnik with her assessment of Croatia's chances.

The country, she explained, is not a regional leader and does not enjoy any wide influence; that is why there are simply no pre-conditions for it to become a moderator.

"There is one more factor which also plays a certain role. Croatia is intensively developing its contacts with Ukraine and certain Ukrainian politicians want to use Croatia's experience for the reintegration of Donbass."

The expert nevertheless pointed out that the three-day visit of the President of the country, which fully complies with European policies and supports anti-Russian rhetoric and anti-Russian sanctions, might indicate certain changes in the EU.

"Europe is interested in renewing its cooperation with Moscow and Zagreb is sensing this 'wind of change.' We now see that German business wants to strengthen its relationship with Russia, and Croatia, which also regards Germany as its key partner, has rightfully interpreted the message. The fact that minor states of the European Union start acting like this is the best evidence that Russian-EU relations are changing for the better," Irina Rudneva concluded.