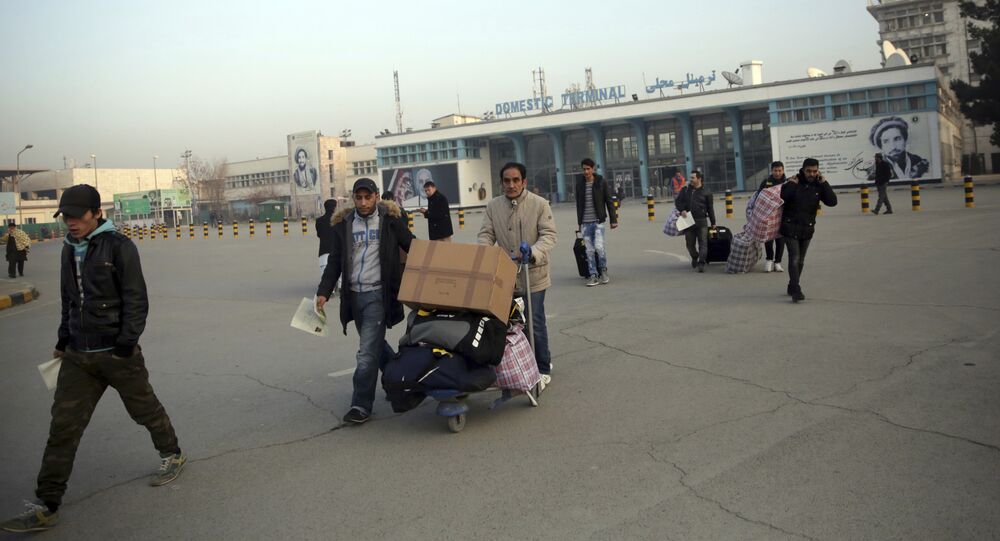 Amnesty International is calling for a moratorium on deportations from Europe to Afghanistan, warning that the security situation there has become worse rather than better in recent years and deportees seriously risk being tortured, kidnapped or murdered, the NGO's Afghanistan expert Horia Mosadiq told Radio Sputnik.

In their eagerness to send asylum seekers home, EU governments are "willfully blind to the dangers" they face in Afghanistan, the human rights campaigners warn in a new report. According to official EU statistics, the number of Afghan citizens sent back by European countries nearly tripled between 2015 and 2016, from 3,290 to 9,460.

"These people are deported back to harm and human rights violations. This is a violation of international refugee law … these deportations are illegal," Mosadiq said.

Afghanistan has become more, not less unstable in recent years; tens of thousands of people have died in conflicts pitting the country's government against the Taliban, Daesh (ISIS) and other terrorist groups. The number of internal refugees is predicted to exceed 2 million by the end of this year, and there are more than 2.5 million Afghan refugees living in dozens of countries, the vast majority in neighboring Iran and Pakistan.

"Some of these people, there weren't born in Afghanistan and they haven't been there in their entire lives," Mosadiq explained.

With an insecure legal status and facing the threat of deportation to Afghanistan, some of these refugees have subsequently fled Asia for Europe.

"Once they were deported, they were left with almost no family connections, no networks, nothing. They were exposed to several risks, including the risk of being recruited by armed insurgent groups, by criminal groups, and at the same time to human rights violations including death and torture."

© AP Photo / Rahmat Gul
Afghan President Ghani: Pakistan Must Stop Harboring Terrorists
Mosadiq says that European countries have received a relatively small proportion of refugees in comparison to neighboring countries. In 2015, when over one million people arrived in Europe to seek asylum, 200,000 of them were from Afghanistan.

"Unfortunately, the whole idea of 'refugees' has become too politicized in Europe. We are seeing more and more right-wing politicians in Europe trying to win the popular vote by trying to have policies against the refugees and immigrants in those countries. This is one of the issues that is pushing these countries to deport more Afghans and at the same time."

Last year, violence and clashes between pro-government forces and anti-government elements in Afghanistan resulted in the highest number of child casualties and levels of internal displacement documented since 2009. In a country with a population of approximately 34 million, a total of 3,498 civilians were killed and 7,920 were wounded in 2016. This was a combined increase of three percent over the previous year, according to the annual report of the United Nations Assistance Mission in Afghanistan.

"It should be the other way round. While the number of human rights violations is increasing, we should decrease the number of deportations. We are really concerned that European countries are using the issue of refugees to cover up their own failings here and internal problems and put the blame on refugees, to get people's votes."

Amnesty is calling on European countries to implement "an immediate moratorium on the deportation of Afghan refugees" and on the Afghan government to stop cooperating with the repatriations.

"We know that the Afghan government is under pressure to sign this deal with the EU in return for receiving international aid. We are calling on the Afghan government to stand up for the rights of its own people and be realistic about its capability and the lack of protection in Afghanistan," Mosadiq said.

Over 90 Taliban Militants Killed in Operation in Southern Afghanistan